For a very reasonable price, the iBUYPOWER ARCB 108A configuration nets a dedicated graphics card and plenty of storage for your games, plus room to upgrade it in the future. If you need something to upgrade later, you should seriously start here.

The iBUYPOWER Enthusiast ARCB 108A is a simple and affordable gaming desktop with modest hardware backed by a dedicated Nvidia GeForce GT 710 graphics card. While not as powerful as the Editors’ Choice CYBERPOWERPC Gamer Xtreme GXiVR8060A8, our review unit is more than up to the challenge for basic gaming. Plus, its chassis offers enough space if you want to add more oomph to your rig, and it takes relatively little desk space, making it a worthy money-saving option for gamers who need something inexpensive for DIY adventures and upgrades down the road.

Outside of its reasonable price, the Enthusiast ARCB 108A’s design may be its biggest strength. It measures just 17.9 by 18.5 by 7.9 inches (HWD), a small footprint and short enough to fit in a desk or under a hutch. Sure, this build with a transparent glass panel is nothing new and quite popular with boutique companies and DIY builders, but the big manufacturers tend to stick to full-size towers. The fact that we’re getting a spacious, configurable, and easily gaming system at this size is a real feat.

On aesthetics, the iBUYPOWER Enthusiast looks, well, like a typical gaming desktop, only that it sports a plain black glass front panel on the front while its other siblings like the iBUYPOWER Element 9260 have a trio of RGB circles on the front panel. Nonetheless, part of the ARCB 108A’s appeal is its understated look. With a tool-less design, you can remove the side panel by a few twists to four thumbscrews, then access the fan coolers and GPU alongside the neat cable work.

As for ports, there are front easy top access ports that include a pair of USB 3.0 ports, separate microphone and two activity LED as well as reset and Power buttons. Around the back are two USB 3.0 ports, an Ethernet port, and audio lines. There are also whatever video outputs that comes with your graphics card, in our case there is a DisplayPort, HDMI, and DVI. 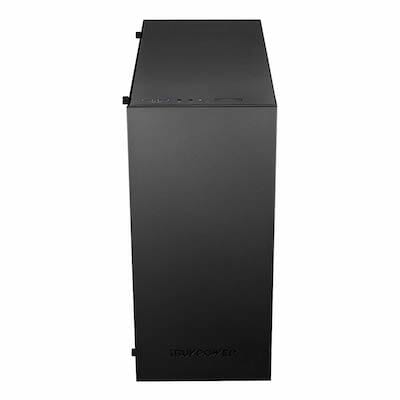 On the other hand, the and the dedicated GeForce GT 710 graphics card is a solid get at this price – comparably priced desktops will net you an integrated graphics card. It is considerably faster than many of Intel’s existing integrated graphics solutions, it’s still best purchased for its features rather than its speed. As expected, the Enthusiast ARCB 108A’s ability to play games at HD is strong, posting 37.7 fps on Fortnite, 31 fps on Grand Theft Auto V and 42.8 fps on The Witcher 3: Wild Hunt; all played at High settings and 720p resolution.

No, that’s not a ton of headroom to maintain 60fps even on medium settings on more demanding games, but again, it’s good for a desktop at this price designed for beginners. In case you need to steady over 60 frames per second on modern Tripple-A titles, the CYBERPOWERPC Gamer GXiVR8060A8 and SkyTech Blaze II pack Nvidia GeForce GTX 1660, so the performance is of course better, but they cost a few hundred dollars more. 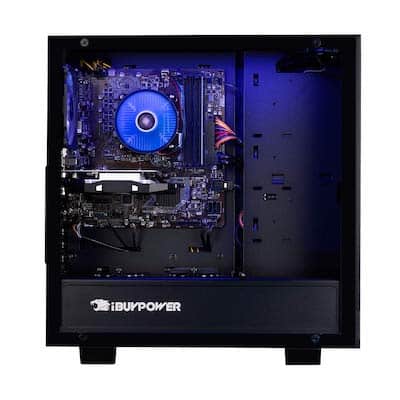 For a very reasonable price, the iBUYPOWER ARCB 108A configuration nets a dedicated graphics card and plenty of storage for your games, plus room to upgrade it in the future. If your budget can let you wiggle a bit and you know you’ll play demanding games, or play at a resolution higher than HD, the slightly expensive options, like the Editors’ Choice  for budget gaming desktops, the CYBERPOWERPC Gamer Xtreme GXiVR8060A8 and iBUYPOWER Element 9260 are worth the investment.

On the whole, the iBUYPOWER Enthusiast ARCB 108A offers solid value in a space-saving design, looks pretty good for the price, and is highly configurable especially if you want to upgrade it later. If you’re a just getting into the world of PC gaming but not a performance hound, or shopping for a budget desktop for your kids to play most modern titles with no fuss, this should be at the top of your short list. 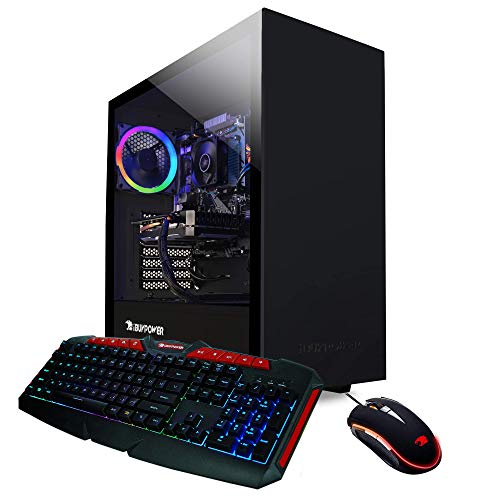