The iBUYPOWER Pro SlateMR 281a is as beautiful as ever and represents an inexpensive gateway into the world of PC gaming with lots of customization options. You can build one from the ground up, without putting much effort beyond choosing and clicking. Just be prepared to spend a fortune on higher specifications.

Prebuilt gaming PCs like the iBUYPOWER Pro SlateMR 281a are only getting more popular, especially when you consider that the PC components you need to build a solid gaming PC have become more and more costly. Although, as we’ve seen from last year, iBUYPOWER’s PC prices have gone up too much. That means more gamers than ever are likely looking in this direction to see if this rig is a reasonable alternative to building a PC, and it is – and we’re happy.

Starting with a respectable AMD Ryzen 5 and an Nvidia GTX 1660 Super, you can scale your iBUYPOWER Pro build as high as the latest Intel Core i9-12900KF and Nvidia GeForce RTX 3090 (TraceMR 252i), with both AMD and Intel versions available, as well as various RAM and SSD configurations and everything in between.

You also have your choice of chassis, including builds full of RGB lighting and stellar cable management options that come in different colors to better match your style.

Our review unit, the SlateMR 281a sits pretty well against similar budget-friendly gaming PCs, including the Alienware Aurora R10, the CyberpowerPC Gamer GXiVR8480A11, and the Skytech Shiva. Ultimately, this iBUYPOWER Pro is a decent gaming PC for anyone who wants a rig customized to their liking without the hassle of actually having to build a thing, all for a price that can’t be beat just about everywhere else.

If you’ve seen an iBUYPOWER Pro desktop PC over the past year, the SlateMR 281a will look familiar. It comes in the same attractive black tower chassis as its predecessor, the iBUYPOWER Pro SlateMR 215a which we reviewed a few months ago.

The bold-front facing iBUYPOWER logo and a trio of fans above it feature RGB lighting that looks impressive. Those looking to showcase the desktop’s innards will appreciate the transparent glass side panel. Top and rear ventilation keeps the SlateMR 281a cool with a total of three possible locations to maximize cooling.

There are two USB-A ports alongside headphone and microphone jacks in the front, though it would have been nice to see at least one USB-C port here. There are four USB-A ports, 5.1 Channel audio out, and an Ethernet port in the rear. That should be enough for the keyboard, mouse, headset, and webcam setup.

Included with the SlateMR 281a is also an iBuyPower gaming keyboard and an RGB gaming mouse which should get you playing out of the box. Considering that most brands don’t include these at a base level, the additions are welcome. Gamers looking to play competitively will have to shelf these basic components for something better.

The iBUYPOWER Pro SlateMR 281a offers solid 1080p on high-to-mid range settings. Modern AAA games with greater visual fidelity like Gears 5, Resident Evil village, and Doom Eternal perform adequately well and have high resolution and settings. The good performance is due to the RTX 3060 (12GB) graphics card that benefits from newer technology like ray tracing and DLSS.

As ever, high frame rates take precedent over visual fidelity in competitive, meaning, gamers looking for more esports performance standards can rest easy that the SlateMR 281a can handle Fortnite, Apex Legends, PUBG, and Rocket League without breaking a sweat at high settings, whether played through the SSD or HDD.

In real-world gaming, the GeForce RTX 3060 makes a strong showing compared to gaming machines running RTX 3050 and 3050 Ti GPUs. Borderlands 3 runs pretty fine at 1080p, delivering 87 fps on average using the ultra-quality settings, which is the second-highest quality preset in the game. The RTX 3060 is equally strong at 1440p with an average of 63fps, 28% and 27% faster than the RTX 3050 and RTX 3050 Ti GPUs, respectively.

On Far Cry New Dawn played at high settings (1080p resolution), the iBUYPOWER Pro averages 107 fps but drops to 65 fps in 4K resolution. And at 4K, the iBUYPOWER Pro’s 39 fps is once again a few frames behind the MSI and Alienware systems with the same GeForce RTX 3060 graphics cards.

As mentioned above, the RTX 3060 graphics card used here benefits greatly from both ray tracing and Deep Learning Super Sampling (DLSS) technologies. Therefore, it’s not surprising that the SlateMR 281a performs especially well at 1080p, but 1440p might not be that fluent, and not all games are going to utilize all that 12GB RAM, after all.

When not gaming, the iBUYPOWER Pro SlateMR 281a is a great productivity machine that you can use for most day-to-day tasks. The 3.9Ghz AMD Ryzen 5 5600G processor paired with 16GB DDR4 RAM and 500GB is capable enough to handle all your computing needs – everything, from processing spreadsheets, typing away projects, and media creation.

We only wish it had bigger storage, something like an additional hard drive on the side would have been better. The 500GB SSD, apart from being fast, will most likely fill up with gaming files in no time, but you have the option to expand the storage on this machine.

Overall, the iBUYPOWER Pro SlateMR 281a represents immense value, especially for a machine that costs just over one grand. It stacks pretty well when compared to gaming machines like the HP Omen 25L that cost hundred dollars more, but pack outdated hardware, in this case, a 10th Gen Intel processor and an RTX 2060 Super graphics card.

At this price range, however, alternatives are many, and most of them offer even better performance. For almost the same price, the Asus ROG Strix G10 boasts an even better feature set: An 11th Gen Intel Core i7-11700 processor, a similar Nvidia GeForce RTX 3060, 16GB RAM, 1TB SSD storage, and Windows 11 Home.

On the other hand, the HP Victus 15L maxes out with a 12th Gen Intel Core i7-12700 processor, RTX 3060 GPU, 16GB RAM, and 2TB SSD storage, in a beautiful, sleek design that will sit well at the office as it will on your desktop without shouting ‘gaming PC’. Still, if you need a gaming PC with the right character and space to take future upgrades, the SlateMR 281a is an excellent choice.

The iBUYPOWER Pro configuration in this review is a capable, future-proofed gaming PC that looks and feels great in-game. Simply put, it’s a capable machine, with the muscle to run processor-hungry, graphics-sipping AAA games at 1080p seamlessly, so that your gaming experience is completely immersive. That applies to resource-intensive applications like video editing programs.

Sure, you’ll have to shell out more cash than you would if you go for the highest configuration in the iBUYPOWER Pro line, but if you’re looking for a smooth and easy gaming experience on high settings, you’re not really doing any gratuitous spending, especially since you’re essentially investing for the future as well as the present. 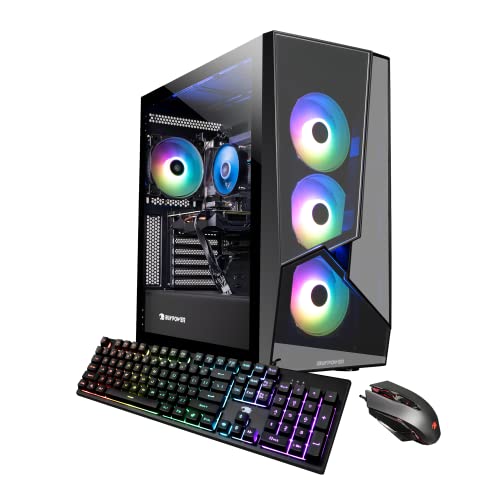 If you can’t spare more than a grand, that’s OK as well. There are a few configurations that will set you back less than $1,000 and get you through medium settings beautifully. And since the iBUYPOWER Pro SlateMR 281a is designed to be very upgradeable, we believe it’s well worth every penny you spend now, and you can just upgrade later on when you can afford to.