Call it an alien mini-artifact. Call it the world’s sexiest gaming toaster. Either way, the iBUYPOWER Revolt 2 9330 is one of the uniquely designed gaming laptops you can get your hands on. And considering the power it packs inside, you just realize that the Revolt 2 is more just a pretty piece of tech.

We’re used to standard towers that take up all desk space, or the small form factor PCs like the MSI MPG Trident 3 (10SI-002US), but iBuyPower’s Revolt 2 9330 comes in a space-saving design with instant-access storage bays that are created for the competitive gamer.

On the inside, it packs a 10th generation Intel core i5-10600KF processor, 8GB RAM, 240GB SSD + 1TB HDD storage and Nvidia’s GeForce GTX 1660 Super graphics card. For a midrange gaming PC, this is a decent feature set, and the fact that it is VR Ready, meaning it can run your virtual reality headsets like Oculus and HTC Vive makes it an absolute showstopper. 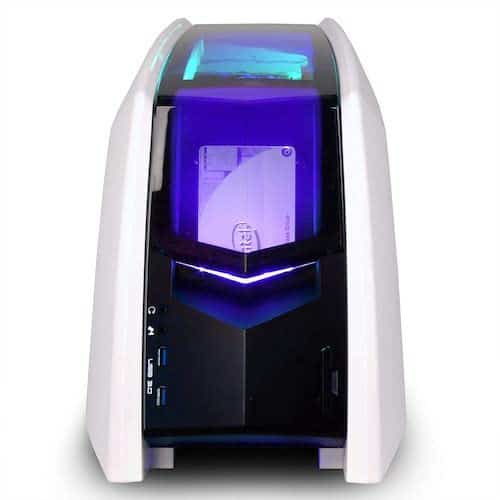 The Revolt 2 sports a unique design, especially the transparent plastic lid at the top, which illuminates some really fancy backlighting, and lets you gaze at the GPU’s spinning fans and silver streaks in all their boldness. The PC’s center is flanked by a pair of white, sharply angled side panels, creating an elegant look that you’ve not seen anywhere else.

In creating the Revolt 2 9330, iBuyPower had eSports in mind, with a space-saving 18 x 15 x 9 -inch chassis that gives you enough space to add another PC on the side at your next LAN event. At 18 pounds, the PC is quite heavy for its stature, but you won’t have much trouble lugging it around.

Also bundled into the package are a gaming mouse and keyboard, but you’ll have to buy a monitor separately. During checkout, you can opt to bundle it with the 27-inch Sceptre C275W-1920RN monitor, that delivers a 75Hz refresh rate and a sleek edgeless design.

For connectivity, you have all your standard plug-and-play connections in the front, with a pair of USB 3.0 ports and headphone and mic jacks. About the only thing you can complain about is the PC’s slim, rectangular power button – which you might accidentally press thinking it’s a memory card holder.

The rest of the ports are located at the back, where you’ll find two more USB 3.0 ports and two USB 2.0 ports, an Ethernet jack, two optical cable inputs and PS/2 ports for legacy peripherals. The Nvidia GTX 1660 Super graphics card packs more monitor options, including DVI, HDMI and DisplayPort for connecting your monitors. 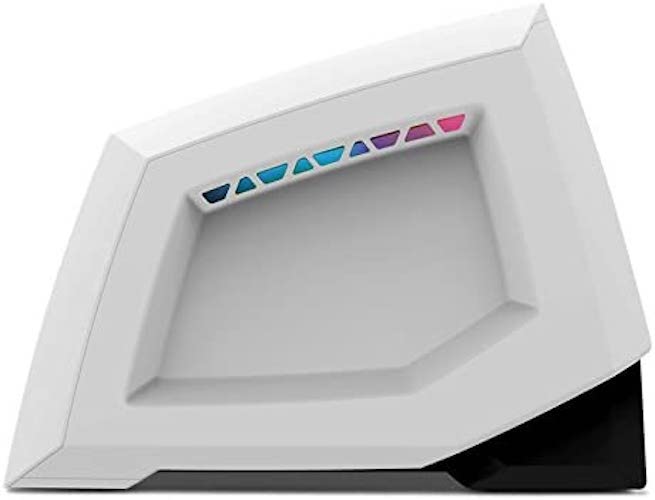 Though marketed as a gaming PC, the iBUYPOWER Revolt 2 9330 has a feature set that makes for a capable productivity machine. Our review unit comes with a 10th-Gen, six-core Intel Core i5-10600KF processor, 8GB DDR4 RAM, and 240 GDB SSD + 1TB HDD storage. This is enough power for web browsing, photo-editing, medium productivity task and some moderate video encoding.

On the other hand, the iBUYPOWER 1000iv2 maxes out with an RTX 2060 graphic card and an Intel Core i7-10700F processor, allowing you to play modern AAA games at high setting in 1440p resolution. This system is quite powerful for a midrange gaming PC, with better performance than the Revolt 2, but will set you back almost double the amount you’re paying for the Revolt 2 9330.

In Shadow of the Tomb Raider (high settings), the Revolt 2 plays at 81 fps at 1080p resolution, but the frame rates drop to 53 fps in 1440p resolution. For a system that costs just under one grand, this is decent performance, and it proves that you can get away with over 60 fps on other modern titles.

On Far Cry New Dawn (Ultra), the system holds its own, with strong performance, and easily dominates its closest competitors, with a 1080p score of 89 fps, 13 frames ahead of its closest competition, and 1440p performance nearly reaches 55 fps. Simply, with the new GPU fused with a capable processor, you can expect butter-smooth gameplay at 1080p resolute at high settings on modern games and even some more.

Whether you’re looking for a gaming PC that will make your friends jealousy or are simple cash strapped for space (or both), the Revolt 2 9330 is absolutely worth a look. Its unique, translucent design and customisable lighting will awe style junkies, while serious gamers will appreciate the ability to switch out storage devices in seconds.

The iBUYPOWER 1000iv2 offers a little more for the money and has enough space for future upgrades. But the Revolt 2 is created for a specific, looks-conscious gamer, and if you’re already drooling at the thought of watching you PC glow every single color of the rainbow as you headshot your opponents, the iBUYPOWER Revolt 2 9330 is certainly for you. 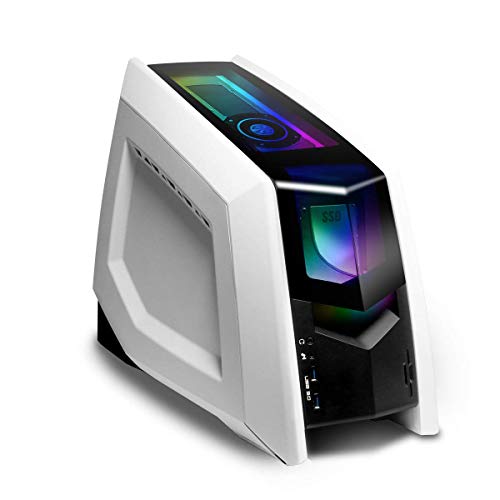