You are here Home » iBUYPOWER SlateMono 237i Review
Gaming Desktops

The iBUYPOWER SlateMono 237i stands out from the ocean of gaming PCs for the sheer number of customization options it offers. Also, it’s a powerhouse that touts a modern chassis as well as powerful, high-end specs that diehards require in their gaming machines.

Gaming machines like the iBUYPOWER SlateMono 237i are for gamers who like pre-builts, while others just prefer to build their own, filling their machines with the best PC components their budgets can afford. However, the recent shortage of high-end PC building hardware means that boutique pre-builts are the way to go for almost every pr0-gamers.

iBUYPOWER is k own for its highly customized builds, allowing gamers to customize their own gaming rig without actually putting in the work, or needing the knowledge and skill to do so. There’s certainly a huge machine for their machines. After all, not everyone has the time and skill to know which motherboard goes with what CPU.

The iBUYPOWER Pro series is not powerful but is available in various configurations for different budgets, from the Core i5-12600KF up to the flagship Core i7-12700KF and RTX 3080 Ti, and everything in between for different budgets. Our review unit the SlateMono 237i sits at the periphery of midrange gaming and packs a 12th-generation Intel Core i7-12700KF processor, Nvidia’s GeForce RTX 3070 Ti and 16GB RAM and 1TB SSD storage.

Out of the box, the iBUYPOWER Pro provides an attractive black tower chassis. The bold-front-facing iBUYPOWER logo and a trio of fans above it feature RGB lighting that looks impressive. Those looking to showcase the desktop’s innards will appreciate the transparent glass side panel. Top and rear ventilation keep the SlateMR Mono 237i cool with a total of three possible locations to maximize cooling.

There are two USB-A ports alongside headphones and microphone jacks in the front, though it would have been nice to see at least one USB-C port here. There are four USB-A ports, 5.1 Channel audio out, and an Ethernet port in the rear. That should be enough for the keyboard and mouse, headset, and webcam setup.

Included with the SlateMR Mono is also an iBuyPower gaming keyboard and an RGB gaming mouse which should get you playing out of the box. Considering that most brands don’t include these at base level, the additions are welcome. Gamers looking to play competitively will have to shelf these basic components for something better.

The Nvidia GeForce RTX 3070 Ti is a sweet-spot graphics card and paired with the 12th Gen Intel Core i7-12700KF on the SlateMono 237i, the result is immersive gaming performance. Although all GPU prices are yet to get cheap (thanks a lot to GPU shortage), the RTX 3070 Ti still hits a great value mark between the RTX 3070 and the RTX 3080. It’s more than enough for 1440p, with just enough pep to make 4K playable, especially with upscaling in the mix.

On the Shadow of the Tomb Raider benchmark (1440p, highest settings), the high-end CPU and cutting-edge graphics card deliver good performance, averaging 123 fps which is enough pixel-pushing ability to keep it ahead of the similarly configured iBuypower system (107 fps.) However, the Corsair ONE i300 (156 fps) and Alienware Aurora R13 (168 fps) machines with higher-end RTX 3090s perform markedly better.

Stacked up against the slightly more powerful RTX 3080 in the HP Omen 30L, the SlateMono 237i holds its own. It is fairly faster in Fire Strike and within a few points in Time Spy, and it shines in Assassin’s Creed Valhalla. The newer Core i7-12700KF at work can boost your frame rate in open-world games like Valhalla.

At 1440p, the Nvidia RTX 3070 Ti is an absolute powerhouse, blowing through most AAA titles with at least 60, but mostly around 100+ fps. Even in Metro Exodus: Enhanced Edition without DLSS, the RTX 3070 Ti sits pretty at 69 fps at 1440p – and that’s with all the shiny ray-traced effects enabled.

Even at 4K, the Nvidia GeForce RTX 3070 Ti in the iBUYPOWER Pro remains unshaken. In games like Dirt 5, Final Fantasy XIV, and Horizon Zero Dawn, the RTX 3070 Ti has no problem at all staying well above 60 fps at max settings, making it an easy choice if you play a lot of MMOs and want to play at 4K.

Our iBUYPOWER Pro review unit is the SlateMono 237i, which comes with a Core i7-12700KF processor, but the MSI Aegis RS 12TG-285US also features the same features set for both the CPU and GPU. The Core i7-12700KF is just a step below Intel’s Core i9-12900K. Well, this isn’t a flagship processor but it delivers flagship performance. It punches above the Core i9-10900K in the SlateMono 237i and goes toe-to-toe with the Ryzen 9 5900X inside the Asus ROG GA35DX.

Both of these chips come with 12 cores, but only eight of those cores are performance-focused on the Core i7-12700KF. Still, it outperforms the 12-core Ryzen 9 5900X in Geekbench and gets within striking distance in Cinebench. Elsewhere, the flagship Core i9-12900K in Corsair ONE i300 is about 15% faster, but the Core i7-12700KF remains excellent for productivity and content creation.

If you’re a professional creative or artist, a higher-end configuration is better. However, for the hobbyist who wants to game and stream, edit a few YouTube videos, or dive into 3D modeling, this midrange SlateMono 237i configuration is a perfect choice.

Should you buy the iBUYPOWER SlateMono 237i?

Yes, you’ll have to spend more than you would if you were looking for a budget gaming PC, but if you’re spoilt for smooth and easy gaming in 1080p and even 1440p at high settings, you’re not doing any gratuitous spending, keeping in mind you’re investing for the future as well as the present.

If you can spare a little more money, the Alienware Aurora AR14 is an even better gaming machine, with an AMD Ryzen 9 5900 CPU, Nvidia GeForce RTX 3080 GPU (with 10GB GDDR6X), 32GB RAM and 1TB SSD + 2TB HDD storage. But if you want to stay under two grand, the iBUYPOWER SlateMono 237i is an excellent pre-built gaming machine. It comes highly recommended. 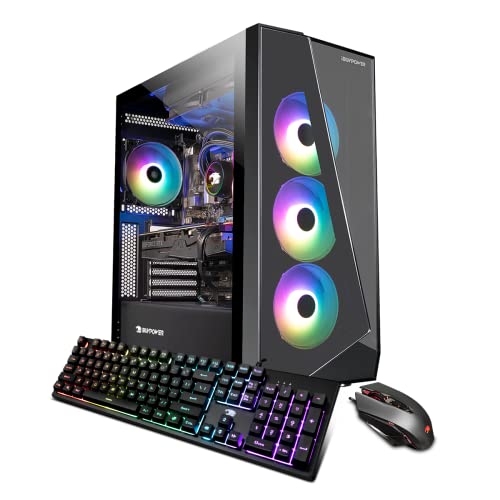