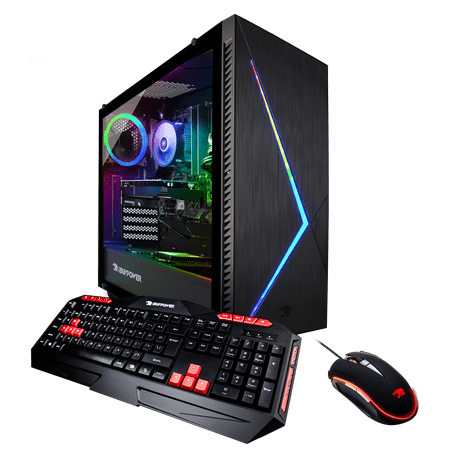 iBUYPOWER has long been known for high performance gaming PCs for less money, offering better value than most custom builders. Now, it’s back with a powerful gaming desktop for the esports enthusiasts or professional. The iBUYPOWER Trace 9240 (Pro Gamer).

The iBUYPOWER Trace 9240 is a high-end gaming desktop, that will get you playing most AAA games at the highest settings, thanks to the latest technologies around including Nvidia’s GeForce RTX 2070 (8GB) graphics card and the fresh Intel i9-9900K (8-core). Any gamer would enjoy its power, but its beautiful, easy access chassis, and top-notch components are aimed at the esports world and those who don’t move their towers often.

These are the latest components around, making this system ready for whatever games you throw its way across the spectrum of resolutions, even 4K. With a reasonable price considering what’s packed inside, and performance top match, the Trace 9240 is among our top picks for midrange gaming desktops.

Built into a standard tower case, the iBUYPOWER Trace 9240 is relatively unassuming if you look at it head on, and if you poke around, there’s a lot to like on the sides. The black tower has a steel frame with two LED fins cutting from the front-straight to the bottom on both sides.

It looks more appealing than a traditional black tower chassis, with the signature gamer looks. At 19.76 by 8.54 by 19.48 inches (HWD) and 30 pounds, the system will take some space on your desk. If you have limited space on your desk, a small-form- factor (SFF) desktop like the ASUS GR8 II-T044Z is a better choice.

On the left flank is a nice looking, tempered glass side panel that open up to the interior compartments and components. Instead of a plain glass panel, the case features an innovative 16 color RGB lighting, that’s remotely controlled.

The glass tempered side panel gives you a gaming aesthetic that can be seen from any direction, and displays the interior cabling, dotted with LED lights. To that, it adds a liquid cooling compartment, air vents on the opposite side panel and a standard iBUYPOWER gaming keyboard and mouse.

The iBUYPOWER Trace 9240 doesn’t have an optical drive, which is fine given that these days you occasionally need to play from DVDs, as most PC games can be downloaded from digital services like Steam and Origin. Plus, having one on the front would be a scratch on the case’s stylish austerity. As it is, there are easy-access ports on the top panel (towards the front): two USB 3.1, microphone and headphone, and a Reset button.

On the back, it’s a completely different story, it’s there you find the rear panel ports: two USB 2.0, two USB 3.1, one RJ-45 Network Ethernet, and Audio 7.1 channel. The new Nvidia GeForce RTX 2070 graphics card also includes one HDMI 2.0b and two DisplayPort 1.4, alongside a VirtualLink connector, the latest versions of the ubiquitous technologies you’d need to power most G-Sync HDR monitors. Wireless connectivity comes via 802.11AC Wi-Fi and is Bluetooth ready.

As for the components packed inside, it’s very easy to see why this gaming desktop is taking competition to the next level. The hallmark component here is the Core i9-9900K, Intel’s 2018 flagship processor on its 9th Generation mainstream desktop CPU line. The Core i9 chip is part of the main consumer platform, released alongside the enthusiast Core X-Series, which on itself is muscular enough to turn some heads.

As of now, the Core i9 chip is the bet you can get for multi-threaded applications. It is an eight-core, 16-thread CPU capable of boosting to up to 5Ghz, a feature Intel bills to be the ‘best thing’ to happen in gaming. In fact, it is not only beneficial for gaming, but also for professional creatives and multi-taskers who sometimes need to stream content side-by-side with CPU-intensive application.

More important, this is the only chip among the initial 9th Generation Core releases to support Hyper-Threading. Upon launching the 9th Generation desktop version, Intel removed that feature from the Core i7 and made it available only at the Core i9 level, something that won’t augur with some shoppers. To keep it running, the iBUYPOWER Trace 9240 is fitted with a closed-loop liquid cooler that can be seen as a nifty clear cover over the CPU heat sink.

Alongside the chip is the still-hot Nvidia GeForce RTX 2070 graphics card. While these new pieces of hardware may offer moderate upgrades for those already rocking systems with GeForce ‘Pascal’ and GTX 1080, they are downright powerful in their own right. iBUYPOWER also packed 16GB of DDR4 memory in this build, alongside 1TB M.2 solid-state drive (SSD) and a 1TB platter-based hard drive.

The new Nvidia GeForce RTX 2070 used on the iBUYPOWER Trace 9240 is no slouch, leveraging new technologies to enable real-time ray tracing on your favorite games and deep learning Tensor cores. From the onset, the next-generation GeForce RTX 20-series graphics cards (starting with GeForce RTX 2070 and GeForce RTX 2080 Ti) look like the most significant generational upgrade to the gaming cards. The GeForce RTX 2070 system included in this system uses new Nvidia Turing architecture that boasts more cores than existing GTX GPUs.

We mentioned earlier that the Trace 9240’s design isn’t entirely different from its predecessor, and for that the graphics must be the culprit for the price hike. Thus, we expected that performance needs to be impressive to justify the added bucks, and right now it seems to be the case. Nvidia claimed that the GeForce RTX 2070 would be, on average, 50 percent faster than the GTX 1070.

That’s true but on tests the overclocked GeForce RTX 2070 Founders Edition basically tied with the GTX 1080, which somehow adds to the typical aspect of diminishing returns, while the GeForce RTX 2080 Ti Founders edition remains unrivaled, so far. And, there is some difficulty assessing the RTX 2080 Ti’s performance as it gets tons of new features, including 68 RT Cores for ray tracing and 544 Tensor Cores for deep learning.

As far as comparisons to more expensive systems go, gaming still is, a different story, as many pricier desktops boasts two graphics cards. Compared to the rest with just one, though, the Trace 9240 holds its own, again as a less-expensive option.

As specced, the RTX 2070 boasts 2,304 CUDA cores, 8GB memory and 1,620MHz boost clock, which is far better than the GTX 1070’s 1,920 CUDA cores and a 1,683 maximum frequency. As a result, the new graphics card gets a 20 percent jump in performance, with better frame rates per second over the Pascal GTX 1070 card. Meanwhile, 288 Tensor Cores now bring artificial intelligence (AI) to consumer graphics cards, and Nvidia intends on using these to effect even better anti-aliasing.

Some real-world game scores, the RTX 2070 manages to achieve 33fps on the recently released Shadow of the Tomb raider at 4K, 99fps at 1080p, at very high preset; while Far Cry Primal yielded 32fps, once again at 4K, and 88fps at 1080p, all in Ultra preset his is pretty impressive for a single card GPU, and for the price it can’t get any better. Plus, short of the Nvidia RTX 2080 and RTX 2080 Ti, you won’t find another more capable graphics card than what you have on this system.

The iBUYPOWER Trace 9240 is an efficient, ready-to-go gaming PC with a distinct (yet common) style. Whether you personally like the aesthetic is a question for another day, but at least it has some personality with a distinct-tempered front glass panel and a transparent LED-lit side panel that make it stand out. The design, love it or leave it, is just a part of development that houses a unique array of components that are of more interest.

Of interest is that, the iBUYPOWER Trace 9240 offers decent performance and racks up well against expensive gaming PCs in both productivity and high-end gaming, thanks to the new Nvidia GeForce RTX 2070 (Turing) graphics cards and a capable 9th generation eight-core i9-9900K CPU. With this combination, you don’t have any reason for DIY endeavors, since this high-end system has it all for much less than the competition.

Like our review unit, this year’s Gamer can be configured with the same choices of Intel Core i9-9900K processors, NVIDIA GeForce RTX 2070 graphics cards, 16GB memory and then it tops up with a 1TB SSD. If the extra storage space looks like something that will add more value to your computing needs, the Gamer Supreme SLC10200CPG is an equally strong gaming powerhouse.

Yes. If you’re looking for gaming desktop that moonlights as a productivity PC for media creation but boasts of the latest components and tons of features, the iBUYPOWER Trace 9240  represents unbeatable value. It’s among our Top Picks for midrange gaming desktop PCs.

How much RAM does your PC need?