The Insignia NS-50DF710NA21 is a Fire TV set that combines low price and decent (if not class-leading) performance to edge ahead of most budget smart TVs we’ve seen previously.

The Insignia NS-50DF710NA21 is an Amazon-powered smart TV, and it’s among the few we’d recommend as one of the best TVs for those shopping on a budget.

We’ve seen Amazon’s impressive Fire TV OS held back by bargain-bin 4K TVs from brands like Westinghouse and Toshiba, and its fairly refreshing to see Insignia brand stepping up to offer decent sets to match the quality of the software. This set isn’t perfect by any measure, but the Insignia is the best Fire TV we’ve reviewed, and it delivers great picture for a big-screen, budget set.

A pair of plastic feet support the screen, and while they feel a little chunky, they look great – they are perpendicular to the display instead of the awkward angled position that you find on so many inexpensive designs. This is a remarkable improvement, but for a low-priced TV, even small design changes do make a difference.

Around the back, there are four-hole pattern for a standard 200 x 200-millimeter VESA. Port options are a bit scarce but acceptable for an entry-level TV. On the left side, there are two panels of inputs, one facing the left and includes two HDMI ports (one with ARC support), a single USB port, and a headphone jack for audio output. There’s also a second, rear—facing panel that offers a third HDMI, an RF connector for antenna and cable, composite video input, digital optical output for surround an Ethernet port.

Going by its specs, the Insignia NS-50DF710NA21 stands out as a good entry-level 4K TV: a 50-inch display, a 60-Hz refresh rate and limited HDR capability. That’s a lot of Amazon TV than you’re paying for, and it will surely amaze you out of the box. It offers adequate color accuracy that easily matches that of the slightly expensive TCL 55R625, making it a worthwhile budget TV. It can display 4K high dynamic range (HDR) content in HDR 10, but it doesn’t support Dolby Vision or other HDR content types. 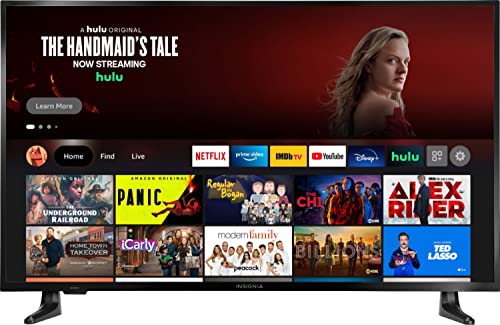 While I’ve had reservations with Amazon’s smart Fire TVs in the past, the Insignia NS-50DF710NA21 is the first one I’d recommend. It combines low price and decent (if not class-leading) performance to edge ahead of most budget smart TVs we’ve seen previously.

That said, the TCL 55R635 remains our favorite 4K TV, mostly for its extensive HDR support and excellent picture quality, but the all-new Insignia NS-50DF710NA21 manages to match the set in a few key respects. If you’re looking a widescreen set with robust smart TV features, this is easily an excellent choice.