The Insignia NS-50F501NA22 (F50 QLED TV) is an entry-level 4K Tv that ropes in quantum dot panel technology to deliver an awesome viewing experience, much better than traditional LED-backlit TVs, and it also gets adds Dolby Vision, HR 10, and DTS Virtual:X at a reasonable price.

The Insignia NS-50F501NA22 is the latest version of the Insignia 4K QLED Fire TV F50 Series, and it remains a good bargain and one of the best models with Amazon Fire TV built-in. The best feature remains its robust and quick implementation of Fire TV OS and all the fantastic features that come with it. Costing under $500 for the 50-inch model, the NS-50F501NA22 is an incremental update from last year’s version.

Previous Insignia models like the Insignia NS-55F301NA22 have offered 4K resolution and support for HDR10, and the latest Toshiba C350 Fire TV Edition upped the standard by including Dolby Vision compatibility. But none of these models have had a quantum dot-based display, so the newest NS-50F501NA22 sets a new standard.

With a QLED display, our review model now delivers brightness and color accuracy that’s as good as competing Roku TV or Android TV models from TCL and Hisense. It also adds DTS Virtual:X for audio, Dolby Vision, and HDR10 (but curiously not HDR10+) formats for purer pictures without sacrificing brightness.

For this review, we have the 50-inch versions of the Insignia 4K QLED Fire TV F50 Series. But there are several other sizes of the Insignia Fire TV available if you’re looking for something bigger for your living room.

We’ve listed the available models below, but be aware that the Insignia 4K QLED Fire TV F50 Edition is frequently on sale, and most models, especially the Insignia F30 Series, have been available at lower prices off and on for the last several months. Even without discounts, the Insignia NS-50F501NA22 earns a place among the best TVs under $500.

Across these models, the Insignia 4K QLED Fire TV line is virtually identical, offering the same number of ports, the same 4K resolution and HDR10 support, and the same display. All the sets use a direct-lit backlight and feature the same processor. As a result, expect the performance to be similar for all sizes, with the same strengths and weaknesses as the 50in we used for this review.

The Insignia NS-50F501NA22 is sturdy and clean, with nothing to match premium designs like Sony A80J or the LG OLED, but it is in line with similarly priced Hisense and TCL models. Simple and smart. Assembly is easy enough: screw two wide-set, V-shaped feet to the bottom of the panel and you’re done.

The NS-50F501NA22’s panel and bezels around the screen are far from the thinnest we’ve seen around, but it feels like a sturdy, modern TV with minimal wobbling in a tabletop position. You can also wall-mount it, if you’re so interested, it’s VESA 100×100 standard. You’ll be surprised by the quality of plastics used on the TV’s chassis; it looks and feel nice, I was expecting it to feel a lot cheaper.

The included remote is also quite simple, featuring clean white lettering and a straightforward, smooth layout. There’s a decent array of buttons, including a dedicated microphone button (for Alexa), volume/channel rockers, and dedicated buttons for Prime Video and Netflix.

All together, Insignia has put together a decent design without too many corners, which is nice to see considering how affordable this TV is.

The Insignia F50 Fire TV has four HDMI ports, including one that supports an audio return channel (eARC/ARC) for easy connection to a soundbar. That number is pretty typical for TVs at this price range. Other inputs include a composite video connection, a coaxial RF antenna connection, and a USB port. With eARC you can send high-quality audio, like Dolby Atmos via TrueHD to a compatible receiver.

It produced a sharp picture overall and offers a great viewing experience out of the box. As mentioned, the Insignia NS-50F501NA22 uses quantum dots technology to achieve a much purer white light from the TV’s backlight without sacrificing brightness. The result is significantly much better accuracy, a larger color volume, and better vibrancy. It supports HDR10 and Dolby Vision – but not HDR10+, a dynamic HDR format that competes with Dolby Vision which Amazon supports via its Prime Video streaming service.

The F50 Series also gets Alexa access via the included voice remote control and audio is enhanced with DTS Virtual:X technology, resulting in a more immersive sound experience. Speaking of audio, HDMI eARC is supported and all four HDMI ports work with auto low-latency mode (ALLM), the other supported HDMI 2.1 feature.

For you to get the most of Fire TV features, you’ll need to sign in with your Amazon account, which is very typical of Fire TV streamers, which are built around using your account for transactions like purchasing the app and renting media. However, on the Insignia Fire TV Edition, you don’t need an Amazon account to use the TV. There is an optional Basic mode that lets you use the TV as a TV, without access to most streaming features in the interface, but provides access to the TV’s varied inputs.

Still, most of us would want to use our Amazon account to access the full features of the Insignia Fire TV Edition, bearing in mind how robust it is as a smart TV platform. For instance, it lets you access most streaming services, including Amazon Video and Music, Hulu, Netflix, Sling TV, Spotify, and Twitch. Curiously, Google Play Movies & TV, as well as Google Play Music, are absent, and YouTube loads only via the Firefox or Silk web browsers.

Not surprising at all, while the Fire TV OS is ideally based on Android, rarely do you see Amazon and Google get along much on content. The Fire TV includes access to the Alexa voice assistant, which you can easily use on the Insignia Fire TV Edition by pressing the microphone button on the remote and speaking into it. Sure, it may not be as handsfree as the Echo or Echo Spot, but it’s still functional out of the box with the press of a button.

Insignia did a lot right with all models in its Insignia NS-50F501NA22 QLED TV. The build quality has nothing to fault for the money, and it certainly looks and feels far nicer than I was expecting. And if you’re tuned into the Amazon Alexa ecosystem, the Insignia F50 QLED delivers a clean, unpixellated look and voice-command functionality of the Fire TV software that comes built-in with this TV.

If this is your size/price range, though, you can’t get it better elsewhere. If you’re mainly interested in the Fire TV experience and Alexa compatibility, the F50 Series won’t let you down. Again, getting the whole Alexa voice command experience baked right into the remote is cool, especially in this price range. That brings a lot of value and the added QLED display makes the Insignia NS-50F501NA22 an easy choice to recommend. 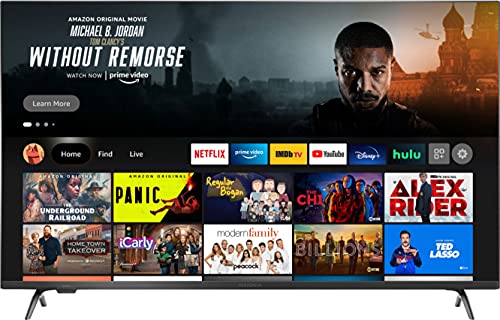