The latest Instant Vortex Plus is a feature-loaded appliance that does an excellent job of air-frying everything from chips to chicken wings. Its 10-quart capacity and the fact that it can now grill and dehydrate as well as bake, roast and reheat make this a fantastic appliance for your modern kitchen.

Instant is known for its wide range of kitchen appliances that offer limitless cooking options in one device, one such popular device is the Instant Pot Duo 7-in-1 range, and its latest addition is the Instant Vortex Plus. An upgraded version of Instant’s current air fryer, with brushed stainless steel rather than a black plastic exterior and a clear view glass that offers a glimpse at the crispy foods as they cook. It’s not only design that has been upgraded, however.

In addition to air-fry, broil, bake, roast, and dehydrate, the Vortex Plus can also reheat and rotisserie. It is a 7-in-1 kitchen appliance, making it even more versatile than its smaller sibling, the Instant Vortex, and the large 10-quart capacity makes it ideal for medium households.

The best air fryers circulate hot air around the food in the frying basket so it cooks faster than traditional methods and it gets crisp too, and the Instant Vortex Plus does that with precision. Again, air fryers use considerably less oil when crisping food, the Ninja Air Fryer we review a few days ago uses up to 75% less oil; Instant claims the Vortex Plus uses 95% less oil. Still, both offer a healthier way to enjoy fried food that would otherwise be deep fried, without changing the original taste.

On the Instant vortex Plus, there are seven one-touch smart programs with default lengths and temperatures, although you can still adjust the defaults as necessary via the touch functions on the front of the air fryer’s control panel. Once you’ve set the time and temperature on these presets to meet your cooking preferences, you can go ahead and save the changes to memory to create your custom preset, meaning you don’t have to adjust the program every time you cook the same foods.

The Instant Vortex Plus is a fairly large air fryer, measuring 13.23 x 13.23 x 14.37 inches and weighing 19 pounds. That large footprint comes with lots of benefits, however; and in this case, it means you have an equally large capacity of 10 quarts which corresponds well to the numerous cooking methods. As mentioned, the latest Vortex Air Fryer can now grill and now grill and dehydrate as well as air fry, roast, bake, rotisserie and reheat. Should you buy it, be sure to relegate some other kitchen gadgets to the cupboard, so countertop space won’t be an issue at all.

The Instant Vortex Plus 10 still comes in the square shape of the Instant Vortex Air Fryer, and so is the square basket and dishwasher-safe crisper tray. However, unlike its predecessor which came in a black plastic exterior, our review model comes I. a brushed stainless-steel finish, although it isn’t as fingerprint resistant as we hoped.

The stainless-steel dial on the control panel has vanished too. Now you have a full touchscreen panel that has touch functions for time, temperature, start, cancel, light, and rotate as well as functions for the 7 cooking functions we mentioned earlier. The control function is easy to clean, you just have to wipe it with a damp cloth. It can reach a maximum temperature of 400F / 205C and can cook for up to one hour, giving you the flexibility to prepare a wide variety of dishes.

In the same spirit of making everything digital, including dropping the manual stainless-steel dial, the air fryer doesn’t come with a recipe booklet, too. To access the recipes, you’ll need to go online or use the Instant app for your smartphone or tablet. The repository has up to 1500+ recipes, but they’re not specifically tailored for the Air Fryer, but rather for Instant’s other kitchen gadgets.

The Instant Vortex Plus impresses with versatile cooking capabilities. To cook homemade fries, you just need 2tsp oil for a 500g batch, and even chicken wings both come out evenly browned in under 20 minutes. The fries have crisp exteriors with a satisfying crunch when bitten, with tasty, soft potato inside. Similarly, the chicken wings have crisp skin, but the meat inside remains succulent. T

he suggested temperature settings and timings from the Instant Pot app are very precise, in our opinion, you don’t need to tweak them, as the results are on point.

Like other air fryers, the Instant Vortex Plus does speed up cooking time, meaning you can cook chicken wings for almost half the time you would take in a conventional oven. The air fryer can cook 500g of frozen steak-cut fries in under 15 minutes, and while they don’t come out as crisp as the homemade fries, they are evenly browned and tasty, for just under half the recommended cooking time for a conventional oven.

The air fryer provides an audible and visual alert once it’s pre-heated and it’s time to place the food in the basket, and another alert at the halfway point. This is a feature we found missing on the Ninja Air Fryer AF100UK, but it’s a handy feature so that you can turn or shake the food as required to ensure it’s evenly browned.

As with all air fryers, the Instant Vortex Plus makes extractor-fan-like noise during cooking, which measures 64db, similar to the noise a dishwasher makes mid-cycle. The sound only lasts for the length of cooking time, and for most dishes, that’s around 20 to 30 minutes, which we think is an acceptable short time. The casing remains cool to the touch during use too. 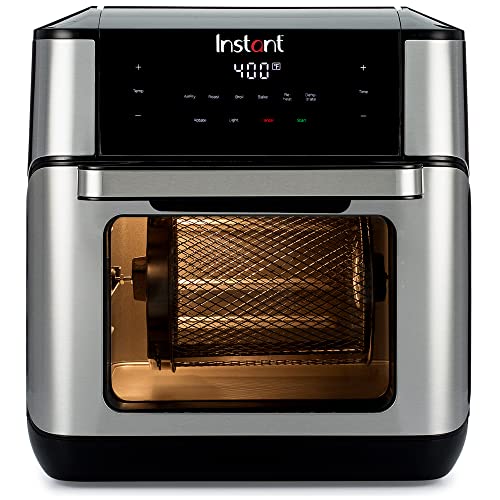 Instant Vortex Plus 10-Quart Air Fryer, From the Makers of Instant Pot, 7-in-10 Functions, with EvenCrisp Technology, App with over 100 Recipes, Stainless Steel

Should I buy the Instant Vortex Plus?

If you’re considering buying an air fryer, the Instant Vortex Plus is an easy choice to recommend. Its ClearCook window is an obvious selling point and the OdourErase technology means the house will never smell of fried food again. And, the EvenCrisp system delivers brilliantly crispy results.

In addition, the seven unique cooking functions are straightforward to customize via the fully touch control panel. I also like that this model doesn’t dominate your kitchen countertop but isn’t so compact that you have to make multiple batches of every dish. For households of four to six, you really can’t go wrong with the Instant Vortex Plus.