The Katchy Indoor Insect Trap is the best portable insect catcher and killer for anyone looking to deal with small insects such as mosquitoes, gnats, fruit flies, or drain flies in the home. It runs silent throughout the night and is safe for use almost anywhere in the home.

The Katchy Indoor Insect Trap is an innovative way of dealing with flying insects around the home. Unlike bug zappers that use light to attract insects and then zap them, the Katchy insect trap takes a modern approach that’s completely more modern than everything else.

Instead of zapping insects and making noise in the room each time an insect is neutralized, the Katchy indoor insect trap combines fan suction, attractive UV light, and a sticky pad to trap insects, all in a fashionable design that creates a safe and sanitary solution to flying pests in the home. You no longer have to rely on annoying zappers to trap indoor flying insects anymore.

About the Katchy Indoor Insect Trap

As mentioned, the Katchy fly trap uses a different approach from bug zappers, but in reality, both use the same mechanism to attract and trap the insects, only the method of elimination differs. First, the trap uses an ultra-violet (UV) light to attract the insects, making it effective at night with surrounding lights turned off. So, you’ll want the Katchy light to be the brightest in the area so all the flying insects are attracted to it easily.

Once the insects get close to the light, there’s a fan that sucks the bugs into the trap. Once the insects are sucked into the holding area, and with the fan constantly working against them, it’s practically impossible for them to crawl or fly up the trap.

At the bottom of the trap, there’s a sticky board where the insects will land (or get blown directly into it from the fan). The bugs are then stuck to the glue and they can’t move. This is the same mechanism used on the sticky tape that hangs from the ceiling, only that it’s more hidden inside the beautiful device so it doesn’t look gross.

On the other hand, most bug zappers like the Flowtron BK-40D Electronic Insect Killer use ultra-violet lights to attract insects, too. However, instead of blowing the insects into a trap or jar, the bugs are attracted to the center of the device, where they are electrocuted, usually between two metal grids, and then they drop dead into a collector at the base.

While they’re effective at killing flying insects, the downsides include the constant noises each time an insect is electrocuted, and they don’t necessarily kill the specific bugs that bother you.

How to Use the Katchy Insect Trap

You can use the Katchy indoor trap pretty anywhere, but ensure it won’t get wet and the location has a power source. It comes with a sizeable plug that you can use in a standard outlet, but you can alternatively power it via USB.

Measuring 5.5 x 5.5 x 9.1 inches and weighing only 1.37 pounds, the Katchy trap is a small and portable device that you can use at home, likely in the kitchen near your fruit basket. For efficiency, you should place it around wherever you’re seeing the most insect activity.

Also, you can take the Katchy camping with you, and it will fit well in your tent. The portable and small size means that it won’t add more weight to your vacation itinerary.

This trap works best with the lights off so it can attract more bugs to the UV light. It has both manual and automatic modes, the latter uses a light sensor at the top of the unit so the UV light will only come on in the evening when the other lights are off.

Elsewhere, the Katchy Insect Trap sports an attractive design that will fit anywhere in your home without being obtrusive. It comes in white or black colors, but the UV light is always a purple-ish color. You can use it in the kitchen office or on your outdoor patio.

All insects captured by the Katchy are held by the glue trap, so it needs to be cleaned out once it is full. How often you clean it depends on how many bugs you’re catching. Some people can go a month or more on one trap; that should be ideal unless you’re dealing with a serious infestation.

Replacing the glue trap is straightforward: Just press the release button on the side of the Katchy and the bottom drops open. From here, you can empty the glue board directly into your trash without ever having to touch it. Once that’s done, install a new glue board into the device and you’re ready for another cycle. The Katchy Refillable boards are available in 4-pack, 8-pack, and 24-pack sets.

Should you buy the Katchy Indoor Insect Trap?

The Katchy Indoor Insect Trap is a great household device for anyone looking to deal with small insects such as mosquitoes, gnats, fruit flies, or drain flies in the home. It stands out as a better alternative to sticky tape traps that will be hanging from ceilings in the room, or bug zappers that produce disturbing noise in the home. 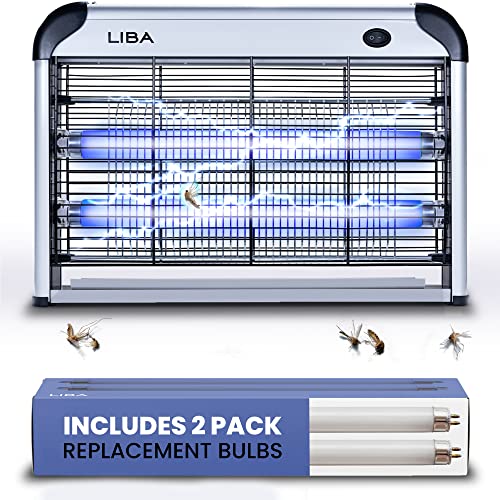 The one thing to keep in mind is that the Katchy is mostly effective at night, and it won’t work with larger insects like house flies. If you need to deal with larger insects, we’d recommend something like the LiBa Electric Bug Zapper that’s efficient for indoor use and comes with a powerful 2800V grid and a removable washable tray.

Otherwise, for small insects like mosquitoes, gnats, moths, fruit flies, and the rest of the clan, the Katchy Indoor Insect Trap is the best you can get, for a buzz-free home insect trapping experience. It comes highly recommended.