The Lenovo Chromebook C330 (81HY0000US) is perfectly capable of handling Web surfing, emailing, Google Docs/Office Online productivity work, and casual gaming of most Chromebooks; with the added versatile of a convertible design at a low price.

It was only a matter of time before a laptop would pop that perfectly converges Chrome OS and Android to its full potential. Affordably, for that matter. It wasn’t until we got our hands on the Lenovo Chromebook C330 (81HY0000US), though, that we saw the concept executed in all glory.

It goes without saying that the notebook is well crafted and has its charm set on a multifaceted set of features. We would go on and on about the flaws we saw on earlier Chromebooks if you allow us – but all you need to know is if the Lenovo C330 (81HY0000US) is everything we want in a value Chromebook.

That’s correct. Lenovo finally deliver a budget laptop that scores points not only for its remarkable emulation of Android apps available on Google Play store but also for its sexy and easy to understand design, that knocks a majority of 2-in-1 laptops out of the woods. Its clear in our minds that the Chromebook C330 is inspired by the Google Pixelbook, but it goes ahead to offer reliability and versatility for the value hunters out there.

In most cases, you’d sacrifice something like the C330 for its low price. The design isn’t flimsy or flawed, but it Hasn’t passed the MIL-STD 810G ruggedness tests of the ASUS Chromebook Flip C213SA-YS02-S or the Acer Chromebook 11, and it doesn’t come with a stylus pen as the Asus Flip does.

That’s just about the only thing you might not like about this Chromebook. Otherwise, it uses a colorful IPS touchscreen, which I consider surprisingly as I expected a cheap TN display at this price range. The screen measures 11.6-inches diagonally and has the all-familiar 1,366 by 768 resolution. The body is cut from white plastic with black keys and thick bezels around the display; with a Lenovo and Chrome logos on the lid.

Chromebooks are mostly about portability, at 2.64 pounds the C330 can easily be lugged on daily commute. Compared, the 12.5-inch Asus Chromebook Flip with an aluminum construction weighs just 2.43 pounds. Measuring 0.77 by 11.4 by 8.5 -inches (HWD), it is in the same ballpark with the likes of Spin 11 and fairly smaller than the Asus C213SA. All of these Chromebooks will easily fit a briefcase, though, slightly heavy to hold on one hand in tablet mode. 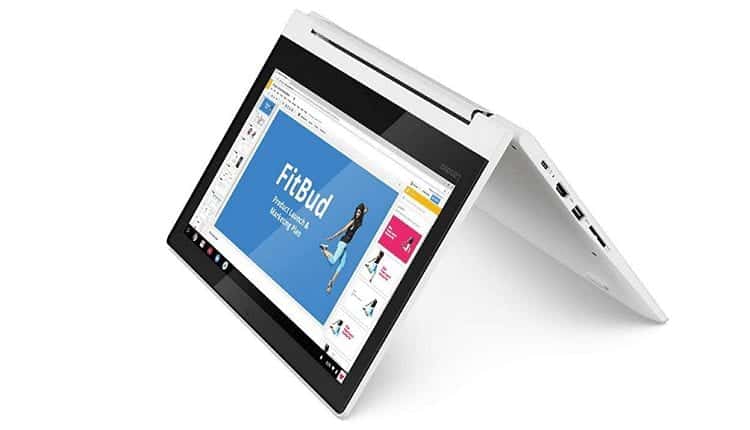 The 11.6-inch IPS screen looks pleasing, even with its low resolution that gets a bit of pixilation (as is common with other 1366 x 768 pixel displays). Brightness is sufficient for daily use, as you may not be able to turn it down very far to save power – contrast is great, browser text and Google Docs look good on black-on-white instead of dark-gray-on-light gray.

On the laptop, viewing angles are broad but they do get reflections on the glossy touch overlay. We anticipated clear and well saturated, of which the laptop delivers well. As a result, you get sharp images and videos on the touch screen. 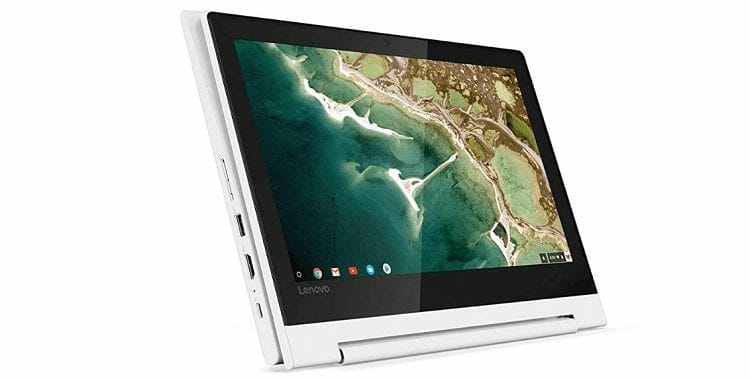 Connectivity options on the Lenovo Chromebook C330 are adequate, but they might be lacking for some users. The left side holds a USB-C, USB-A, and HDMI ports as well as an SD card for extended storage. Just like most Chromebooks, the system comes with 100GB of Google Drive cloud storage for two years.

In addition to a slick design, the keyboard is one other nice feature you need to watch out for. It is laid out in a familiar Chromebook pattern, with a search key that replaces the Caps Lock, with dedicated buttons for browser navigation, brightness, and volume keys along the top row. It feels comfortable and snappy to use, something most folks migrating from Windows will appreciate, but keep in mind that it lacks Page Up/Page Down and Home/End keys. The touchpad is responsive and works as expected.

A wide single hinge allows for different orientations –stand, tent and tablet modes, although it elicits some wobble when the screen is tapped. The system doesn’t have rubberized edges that would keep it from skidding on your desk or table when being used in tent mode, but it’s something we can ignore, as the system remains comfortable to use. 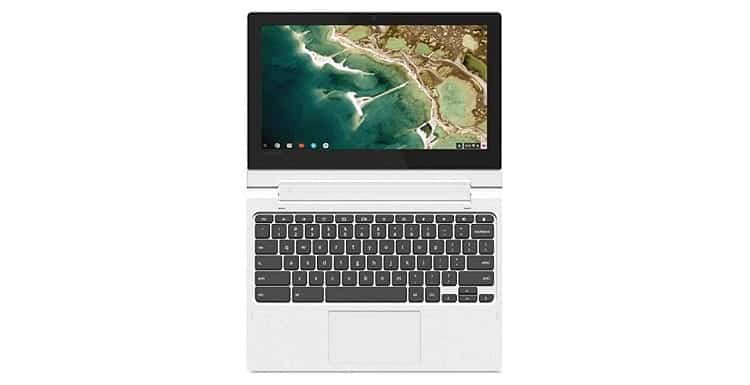 Intel Core M-Series and Core i3-i5 Series CPUs might just be perfect for powering Chromebooks (budget and premium, respectively) as they offer better performance than average Celeron chips. Our review unit is fitted with a 2.1GHz MediaTek MT8173C processor, 64GB flash storage and 4GB RAM – a combination that doesn’t offer much for multitaskers but if fine tuned for basic users, especially students.

It will let you execute basic computing functions, such as allowing you keep multiple browser tabs open and stream YouTube videos. The system is good for light graphical loads, since the Intel UHD Graphics 620 lacks the muscle for gaming, but is well suited for streaming online media art 1080p/60fps. You can extend the display to an external monitor via the HDMI/USB-C port at 4k/30Hz, but you may not get smooth pixels. For Full HD or lower, you’ll be much ok.

If I were to rate the C330 convertible’s performance, it’s rightly place it in the middle of Chromebooks we’ve reviewed before, though its performance comes behind the likes of HP’s Chromebook x2, which leads the pack of low-cost ARM laptops. Tabs launch swiftly and the system doesn’t get slowed down with a dozen browser tabs active. Regardless of the actual specs, the Lenovo C330 performs well something most users will appreciate at this price point.

Chromebooks are very excellent with battery life, and the Lenovo C330 doesn’t lose the chase. Its 45 Wh battery manages just over 11 hours on typical use, that includes continuous streaming and refreshing web pages, with screen brightness set at 150 nits. This means that it can easily last a full day at work or school, something you will be hard pressed to crack on a similarly priced Windows notebook. All you need is 1.5 to 2 hours to have the Chromebook fully charged.

Should you buy the Lenovo Chromebook C330?

Apart from the price  you’ll pay for this Chrome OS hybrid, the greatest tie-breaker for whether you’ll buy this device is the type of Chromebook you’re looking for. If you’ve been on the fence for a Chromebook that promotes the Android-fused future Google is pushing, the Lenovo Chromebook C330 (81HY0000US) is what you need. It hews closer to the modern Chromebook format, boasting a great keyboard and longer battery life, while still being able to flip into a tablet.

Alternatively, if you seek a robust, more powerful Chromebook, then your options expand greatly with any budget from the Asus C302CA-DHM4, Google Pixelbook, and the Acer Spin 13 as the usual suspects.

If you’re on a tight budget and need something simple, the Lenovo Chromebook C330 81HY0000US perfectly capable of handling Web surfing, emailing, Google Docs/Office Online productivity work, and casual gaming of most Chromebooks; with the added versatile of a convertible design at a low price.