The Lenovo Flex 14 (81SS0005US) is light, it’s well-built, it performs well, and it’s one of the most affordable laptops we’ve reviewed. There’s a lot to like here.

Lenovo has been crafting some of the lightest business laptops around. In its executive range, the company has the light – ThinkPad T480 (3.6 pounds), lighter – Lenovo ThinkPad T480s (3 pounds), and lightest – ThinkPad X1 Carbon (2.4 pounds). The Lenovo Flex 14 (81SS0005US) continues the company’s tradition and efforts at moving beyond light laptops into the convertibles space.

The Lenovo Flex 14 AMD version has a focus on portability, and that carries over to its 2-in-1 convertible. How will it fare against some excellent established competition?

Once you get hold of the Lenovo Flex 14, the first ting you notice is how light it is. Not surprising, though. That’s what we expected. At 3.5 pounds, this 2-in-1 isn’t as flashy as the company’s clamshell laptops like the Carbon X1 that’s just 2.4 pounds with a 14-inch display.

It’s nevertheless noticeably heavier than the Asus ZenBook Flip 14 (3.3 pounds) and the LG Gram (2.5 pounds). That matters most for a 2-in-1 that’s to be carried on daily commute – you’re more likely to use the Gram 14 than any other convertible around.

Unlike some of Lenovo’s more expensive products, which come in colors such as Clementine Orange and Silver Gray, the budget Flex 14 can only be had in black. This model has simple gray plastic, which only makes for an underwhelming first impression.

That doesn’t make it unattractive, but there is nothing to visually distinguish this laptop from Lenovo’s other models, never mind competitors. Last year, we did a Lenovo Flex 6 14 review, little did we know an upgraded version would drop early in the year with an even better build.

Being a 2-in-1 convertible system, it boasts a pair of 300-degree hinges, allowing you to use the laptop in clamshell mode, tablet mode, or tent mode in between. The pair of hinges feel reassuringly sturdy, and does a good job holding the display in place with minimum wobble.

Connectivity on the Lenovo Flex 14 2 in 1 is excellent, better than most convertibles in the same price range. On the left, there’s a USB-C port, an HDMI port, power adapter input and an audio jack. On the opposite side, there’s a Novo button, a power button, a card reader and a pair of USB 3.1 ports.

Unfortunately, there’s no Thunderbolt 3 support, meaning you won’t be able to plug an external GPU enclosure – but its something we didn’t expect to have at this price point.

On the Flex 81SS0005US, you get a Full HD display that looks sharp and vivid, but loses its glitter when stacked up against more expensive, brighter screen. Its 224 nits are slightly below the class-standard of 250-nits for comfortable indoor viewing. Still, the screen is very usable in an office setting, so don’t be surprised if you find yourself squinting the screen when using the convertible outdoors.

On the plus side, viewing angles on the Lenovo Flex’s IPS-technology display are quite good. Although the screen dims when viewed from extreme angles, it doesn’t show signs of inverse colors, as you’ll see on cheaper displays.

The Flex’s touch display responds well to taps and swipes, and it also boasts pen support. There’s an included Lenovo Active pen, that comes complete with 2,048 levels of pressure sensitivity. You can also snag a plastic USB pen holder for your Lenovo Flex 14 pen, something most business executives need.

The Lenovo Flex’s backlit keyboard feels comfortable, with slight concave keys with tactile bump about half way of each keystroke. It doesn’t include a number pad, but remains reasonably roomy, with very little signs of bending in the middle.

Beneath the keyboard’s bottom-right corner sits a fingerprint reader, which you can use to unlock your Windows profile and open Windows Hello supported apps with a single touch.

A midsize trackpad lets you interact with the Flex, giving a smooth and responsive experience. It delivers accurate swipes, but requires a fair amount of pressure before it can click. To that, there’s a 720p webcam on the screen’s top bezel, which is a little grainy and nosy, but as usual manages to capture relatively clear and sharp video, pretty perfect for Skype chatting.

For sound, there’s a pair of bottom-firing Harman Kardon speakers, better than most average laptop speakers.

AMD’s Ryzen R5 processors are very good performers with a remarkable balance between efficiency and pure speed. Our review unit comes with the AMD Ryzen R5-3500U with four Zen+ cores (8 threads) clocked at between 2.2 – 3.8 GHz, a Radeon RX Vega 8 graphics card, 8GB of RAM and a 256GB solid-state drive.

This Picasso SoC uses the Zen+ microarchitecture that promises an increase of up to 3 percent over its predecessor. Furthermore, the 12nm process focuses on higher clock rates while maintaining power consumption at the very minimal.

The processor used here is AMD’s latest release for budget notebooks. So far, it makes short work of the usual productivity tasks and can even tackle some demanding tasks like video editing. For the business executive who needs to take notes on the go or edit a few spreadsheets on the flip, the Lenovo Flex has the muscle to handle that and some more.

Compared: The The Lenovo Flex 6-14IKB boasts a 1.8GHz Intel Core  i7-8550U processor that delivers better performance, but costs almost double the Flex 14. Again, the  Lenovo Flex 6 14 i7 also gets a better chip, but for those on a budget, the AMD chip used on our review unit keeps the price affordable, but is well tuned for daily productivity.

Where the Flex doesn’t excel more is in graphics. It uses a Radeon RX Vega 8 graphics card that limits you to casual gaming. If your needs include some casual gaming, you’ll want to consider a 2-in-1 like the Asus ZenBook 14 that sports a discrete Nvidia GeForce MX150 GPU, that can handle a few demanding games.

Like most modern notebooks, the Flex has a non-removable battery that works for portability. The battery manages just over 8 hours 36 minutes of endurance on daily productivity. For a portable 2-in-1, this is a good feat thanks to a Full HD display and efficient CPU that offer hopes for longevity. Sure, this is a laptop that will last you well into the evening of a long working day.

The Lenovo Flex 14 2-in-1 is light, it’s well-built, it performs well, and it’s one of the most affordable laptops we’ve reviewed. There’s a lot to like here. In fact, the Flex 14 kind of grows on you the more you use it, especially if you’re an executive who needs a durable system for business meetings and cross-country flights.

One area of disappointment is how Lenovo cut some corners with the lack of an optional discrete graphics card. Some buyers might love the battery life and be fine with less RAM and a smaller SSD. Lenovo should offer configurable choices.

The most direct competitor is the Asus ZenBook Flip 14, a 14-inch premium 2-in-1 convertible tat tries to offer better performance, a better display in a reasonably svelte frame. It offers a Core i5-8250U processor, a discrete MX150 graphics card for gaming and a considerably more solid in its build and has a more precise active pen, and a reasonable price that justifies the hardware. 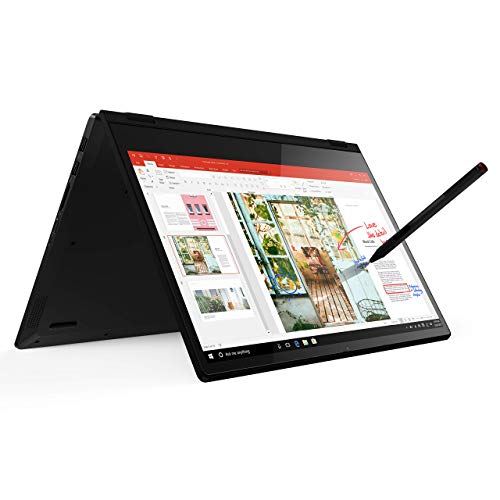 Yes. If you won’t be playing games, the Lenovo Flex 14 (81SS0005US) 2-in-1 feels good in hand, provides all the performance you’ll need to be productive and it lasts a very long in doing both.