The Lenovo B750 is a rare and unusual all-in-one desktop PC, but it is not for everyone. If you're looking to skip the burden os multiple monitor setup while maximising screen real estate, it's an interesting path to follow. 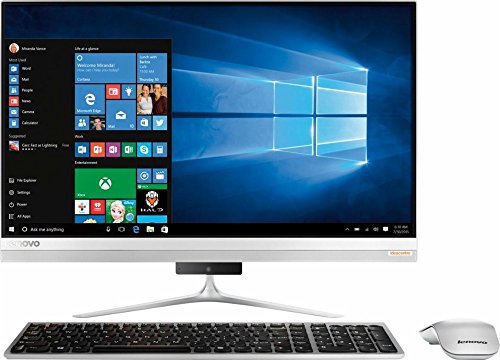 Lenovo’s B750 29-Inch All-in-One Desktop PC isn’t the first system we’ve seen so far sporting a wider-than-normal screen, but it has all the features of a relatively rare animal. Featuring a discrete GPU, high-end CPU, and an excellent IPS display, all of which make it a fun alternative to run-of-the-mill all-in-ones, and hopefully something we’ll hopefully see more of in the future. It’s different, and fun to use, but it cries out for a touch screen.

First, you can display HD video content such as Blu-ray movies without traditional letter box bars. Second, pc games gain a new level of immersion by adding a wider field of view, and; thirdly the wide desktop allows you to put full apps and browser window side by side, much as you might do on a multiple monitor setup.

On the B750, the real star here must be the display. Set on a giant IPS panel, the screen has a native resolution of 2,560-by-1,080, which is ideally the same vertical resolution as a standard 1080p resolution, but the horizontal resolution is 1.3 times as wide as 1.920. Know why you want that? First, productivity is enhanced, especially when you want to create two side-by-side windows, each housing a 1,280-by-1,080 Web browser window or office document.

Although it’s not as much real estate as you’d get from combining two 1080p monitors, but not having a physical break between screen as with dual-monitor setup gives you a seamless view that is easier to work with. I was also liked the idea that I would play HD content, such as Blu-ray movies, without worrying of the usual-wide-screen letterbox bars on the top and bottom of the screen. However, even though that’s an obvious usage model for the B750, I found it somewhat hard to pull off.

One of the nice things about working with with a full all-in-one desktop computer rather than a laptop, tablet, or even hybrid “tabletop” all-in-one is having plenty of room for ports and connections. Here you’re given a total of six USB ports, although one is reserved for the bundled keyboard/muse dongle, as well as both HDMI-in and HDMI-out connections. The former is interesting in case you want to hook up an external source — a tablet, laptop, game console, or other device — and just use the B750’s display.

The Lenovo B750 packs a current-gen Intel Core i7 CPU, a big 2TB HDD, 8GB of RAM and a Nvidia GeForce GTX 760 graphics. Considering this unique features, the B750 feels fairly priced. Even with the new juices in the B750, I have some notable complaints that are two-fold: the system uses an older video card (Nvidia is now trending on the 800-series) which suffers from serious frame-rate drops, especially when you try to push the higher native resolution; and the otherwise excellent display isn’t a touch screen, making Windows 8 somehow hectic to use, this makes the entire system feel dated.

Simply looking at the Lenovo B750 you won’t miss to realise that it cuts a different desktop footprint than most all-in-one PCs, merely because it takes up so much estate on your desktop. As mentioned earlier, the screen itself measures 29 inches diagonally, but it bears an entirely different aspect ratio, so that explains the wider-than-normal shape, but shorter than regular 16:9 monitor sizes. Apparently, you won’t mistake this for a high-design all-in-one like the Apple iMac 27 or theDell XPS 27 (Touchscreen), and weighing in at 32.5 pounds, it’s heavy enough that you’ll want to move it only when its absolutely necessary.

It comes bundled with a basic Lenovo wireless keyboard and mouse. The keyboard is decently slim and angles up at the rear, and includes a full number pad; even though I like my space bars to be a little wider, and the small backspace button isn’t enticing either. The plastic Lenovo mouse is as simple as it gets; and for those thinking of using the B750 for gaming, I’d suggest a more specialised model with more buttons and a sleeker shape.

The Lenovo B750 is a rare and unusual all-in-one desktop PC, but it is not for everyone. If you’re looking to skip the burden os multiple monitor setup while maximising screen real estate, it’s an interesting path to follow. And “interesting” is the operative word here. It is quite okay for games that require a detail/frame rate trade-off, with new immersive quality on a 21:9 screen and for movie watching it feels more cinematic. Better still, the high-end CPU, a big 2TB hard drive, a pretty robust 3.4GHz Intel Core-i7 4770 CPU make the B750 a powerful mainstream/premium desktop.

The massive extra-wide display stands out as a decent deal for those looking for a desktop that’s a little different without breaking the bank. But beyond the specs and price, I just found it fun to use. With a few tweaks, such as a touch screen and a faster GPU, it could be a hard-to-beat alternative to more common all-in-ones. I bet its worth a long look as you shop around for a premium all-in-one desktop, but you can as well look at the Apple iMac 27 and the Dell XPS 27 (Touchscreen), both of which I reviewed early as they offer excellent performance too.