There’s plenty to like about the Lenovo Legion 5 (82B1000AUS), from a sturdy build, a very comfortable keyboard, strong Ryzen 7 power to gaming performance at a very reasonable price.

Lenovo rebranded its midrange and high-end gaming laptops line into the Legion line a few years back, and we’ve always been great fans of the Legion models. The Legion Y530, in particular, were formidable entries in 2019, and for 2020 the Legion 5 take the line to newer heights.

In addition to a streamlined naming scheme, the Legion 5 rocks an updated keyboard, a more practical webcam with a privacy shutter, and either 10th Generation Intel core i7 or AMD Ryzen 7 4000 Series processors.

The AMD Ryzen 7 4800H Processor, Nvidia GeForce GTX 1660 Ti and the 144Hz display in our review model provide butter-smooth full HD gaming experience, and it well rounded by plenty of storage and ports.

On looks, the Legion 5 shares the same busy look as its predecessor – the Legion Y series, despite coming in as rebrand. With that we mean extensive vents and branding, as well as a back section that protrudes for about an inch beyond the screen hinge. As with all Lenovo laptops, it feels high quality, clad in a fingerprint-resistant matte black (Lenovo calls it ‘Phantom Black’) and two instances of Lenovo logos surrounded by silvery metal plates (making a total of 4 logos on this machine). However, the chunky profile (0.9 inches thick, 5.41 pounds) doesn’t quite match the minimalist design of competitors like the Asus ROG Zephyrus M (0.78 inches, 4.39 pounds).

The lid opens to a ventless interior with screen bezels that are about a quarter of an inch along the top. Its keyboard layout includes a full ten-key and space for the arrows, set on a deck that’s sturdy and doesn’t flex much during rigorous gaming sessions.

Port selection is excellent here, with most ports sitting along its back, with the left and right side holding a single USB Type-A port each (you also have a 3.5mm headphone/microphone combo jack). The extended backside holds the Legion 5’s Ethernet connector, a pair of USB Type-A ports, one USB Type-C and one HDMI-out port. The system’s power connector and lock slot also sit on the same back spot.

The Legion 5 sports a 15.6-inch (1920 x 1080) IPS screen that’s a step above budget on both brightness and color range, while at the same time rocking a 144Hz, 100 percent sRGB display that’s perfect for speedy frame rates. For multimedia and gaming, bright colors pop and the screen is more than bright for comfort, rounded out by great viewing angles.

With such a display, it’s easy to understand the rationale behind the Legion 5 having the brightest screen among its rivals. With an average 325 nits of brightness, that puts it ahead of the Asus ROG TUF Gaming A15 (260 nits average), and the XPG Xenia 15 (298 nits average).

On the top bezel is a 720p webcam, that, aside from the included sliding webcam cover, which is surely a nice feature we rarely see on gaming laptops, doesn’t offer anything special. Regardless of lighting, images shot using the camera look washed out and lack their depth.

Without a doubt, Lenovo delivers exceptionally comfortable keyboards and the Legion 5 is no exception. While it lacks the concave key design that’s found on Lenovo’s signature ThinkPad keyboards, it maintains a comfortable layout with full-size keys and noticeable travel distance. Its keycaps also have the same curved-bottom shape as ThinkPad keyboards, and that affords them a little surface area on top of keeping in line with the brand.

The 4.1 x 2.8-inch precision glass touchpad is much comfortable than the keyboard, as it allows your fingers easily glide across the screen in snappy movements. As with most modern touchpads, it uses Windows 10 precision drivers, and you can input multi-touch gestures with little issue.

The Legion 5’s AMD Ryzen 7 4800H CPU and 16GB of RAM will handle most of your productivity tasks with unmatched ease. In fact, it can drown 40 Google Chrome tabs, including a Twitch live stream, a Netflix film and a 1080p YouTube video without lagging at all. The impressive performance is further boosted by the speedy 512GB SSD storage that adds to impressive processing speeds. When not playing, you can launch media editing apps like Photoshop, and the 8-core (16 threads) Ryzen 7 CPU will still not stutter at all.

Now back to gaming, the Legion 5 performance mostly on par with other similarly specced laptops, though you don’t expect the Nvidia GeForce 1660 Ti graphics card to deliver the same level of detail as its high-end siblings (RTX 2000-Series, including RTX 2070 & 2080 cards).

If you’re wondering if the Lenovo Legion 5 could handle VR gaming, the answer has to be a resounding yes. Tested on VRMark Cyan benchmark that measures VR performance, it garners 5,146 P, which is almost double the 2,562 average for budget gaming laptop.

Gaming laptops are never good when it comes to battery life, of course, with a few exceptions. You’re getting at least 4 hours 13 minutes of sustained use, which includes continuous we browsing, and video streams over Wi-fi at 150 nits of brightness. When gaming, you’ll get just over three hours of life, which would be normal for a more expensive gaming laptop, but less than what we’d expect from a mid-range machine.

There’s plenty to like about the Lenovo Legion 5, from a sturdy build to gaming performance at a very reasonable price. While it’s not the lightest or most exciting design, it still feels well-made and included extra features that you can’t easily find in thin profile. Lenovo has done a good job over the years, improving the keyboard and webcam placement is now more sensible. A

dd a capable GPU that just matches the performance of a more expensive option from previous-generation Legion laptops, as well as a capable processor, and the Lenovo Legion 5 (82B1000AUS) stands out as an overall better value than before. 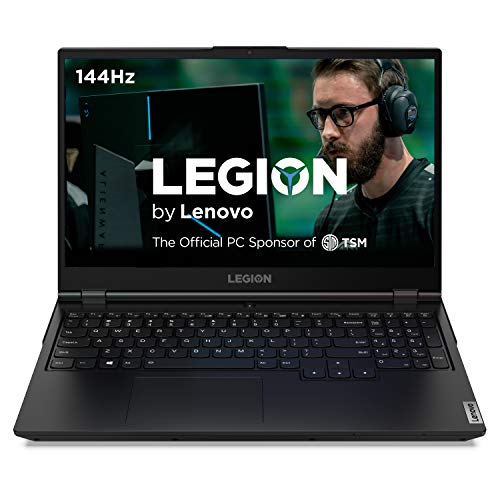