Looking at the Legion Tower T5’s feature set on paper, you’ll realize that it’s a fine addition to the ranks of pre-built gaming PCs in this price category. However, you’ll be looking for a reason to choose it over any other similar machines on the market.

Take, for instance, the HP Envy TE02-0042 (2022), a gaming desktop in the same price range but ropes in a 12th Gen Core i9 processor and Nvidia’s RTX 3070 graphics card, which delivers better gaming performance over the Legion T5’s RTX 3060 GPU and previous gen processor. Even the Asus ROG Strix G15 with a similar RTX 3060 GPU rocks a newer 12th Gen Intel chip, making it a better gaming and productivity workhorse.

But while Lenovo’s Tower T5 may not be one of the best gaming PCs you can buy, it nonetheless offers respectable performance for the price, and you may even be able to get it for much less on a sale. It’s a good reminder that you don’t need to splash out thousands of dollars for a high-end rig to enjoy great gaming performance at 1080p.

The Lenovo Legion Tower T5 sports the same boxy design as its predecessor, with a hefty desktop silhouette. At 27 pounds, this standard desktop PC is light enough that you’ll not have trouble moving it around in the house, but still heavy enough that you’ll be hard-pressed to carry it around to Esports tournaments.

The only feature breaking up the standard black rectangle design are a clear glass side panel and customizable RGB lights in both the front (displaying the Legion logo) and rear (showcasing the tower’s interior) of the gaming PC. The desktop measures 21.65 x 19.09 x 14.57 inches, which gives you a significantly spacious internal are that makes installing upgrades easier. It also gives enough real estate for the RGB lighting to shine.

Most pre-built gaming machines are beginning to use PC internals as multicolored rave rooms, including the similarly-priced CyberpowerPC Gamer Xtreme GXi8800A6 and the

Skytech Archangel 3.0. It’s still nice to see something beautiful other than a solid black case when your eyes drift over to your gaming machine.

The Lenovo Legion Tower T5 comes up a little short when it comes to ports. The top of the case has headphone and microphone ports, along with two USB-A 3.2 gen 1 ports. On the back, you’ll find an Ethernet port, three audio-out ports, and the ports from the graphics card – in this case, one HDMI, one DisplayPort, and one DVI port. Besides that, there’s a USB-C 3.2 port, two additional USB-A 3.2 Gen 1 ports, and two USB-A ports, making a total of 7 USB ports.

The keyboard and mouse included with the Legion Tower T5 are barely worth mentioning. As with all included free peripherals, the keyboard and mouse feel extremely flimsy compared to my dedicated gaming mouse and mechanical keyboard. It feels a bit odd to complain about a “free” mouse and keyboard don’t match up to more expensive peripherals, but it definitely feels like this was an area where Lenovo skimped a little to keep the Tower T5’s costs down.

Anecdotally, if you will be playing older or less graphically-intensive titles, the Legion T5 will let you crank all graphics settings up to max and still run at 60 fps or more. More recent high-budget games require some settings tweaking to run at high frames rate, but they’re all playable.

It will only get obvious when you try to push the limits of what the Legion Tower T5 can do, you’ll realize it isn’t a high-end rig. If for some reason you attempt to use the Lenovo Tower T5 to run the latest games in 4K resolution, you’ll probably going to get stuck. The Tower T5 manages to run Far Cry New Dawn in 4K at a respectable 50 fps, but when playing Assassin’s Creed: Valhalla at the same resolution, it chugged at 39 fps, while Shadow of the Tomb Raider averaged 37 fps in the same settings.

When not used for gaming, the Lenovo Legion Tower T5 also delivers respectable – if not amazing – results, thanks to its Intel Core i7-11700F processor, 32GB RAM, and 512GB SSD + 1TB HDD storage. It takes a little over 10 minutes to complete a video editing task, which tasks the PC with transcoding a 4k video down to 1080p in Handbrake. Elsewhere, the Legion Tower T5 performs reasonably well in Geekbench 5.4 multi-core CPU benchmark test, with a score of 8297. That’s better than most similarly-priced machines but nowhere close to high-end gaming rigs like the Alienware Aurora R14.

Should you buy the Lenovo Legion Tower T5?

Yes, the Lenovo Legion Tower T5 is a capable budget gaming desktop. However, it has a few limits. It’s not a good choice for anyone looking to play modern titles above 1080p resolution and high settings. This is expected of any budget gaming desktop, however, and can be excused by the Legion T5’s excellent design.

The price tag reflects this desktop’s premium design which is a hair higher than similar alternatives. Our Editors’ Choice for midrange gaming desktops, the HP Envy TE02-0042 (2022) costs a few hundred dollars more but packs stronger performance thanks to a 12th Generation Intel Core i9 processor and Nvidia GeForce RTX 3070 graphics card. It sports a muted design without RGB lighting on the chassis but packs a punch under the hood.

That said, Lenovo’s budget desktop, unlike most competitors, is a solid platform for future growth. It has a spacious interior with a conventional layout that supports most upgrades and it won’t confuse an inexperienced enthusiast trying to swap parts. The Lenovo Legion Tower T5 looks great too, and that may help you resist the urge to upgrade to a more attractive gaming machine.

The Lenovo Legion Tower T5 is an affordable, capable and upgradeable gaming machine. For its worth, it’s proof that budget gaming desktops can appeal to enthusiasts, and its overall value is a tough-to-beat. 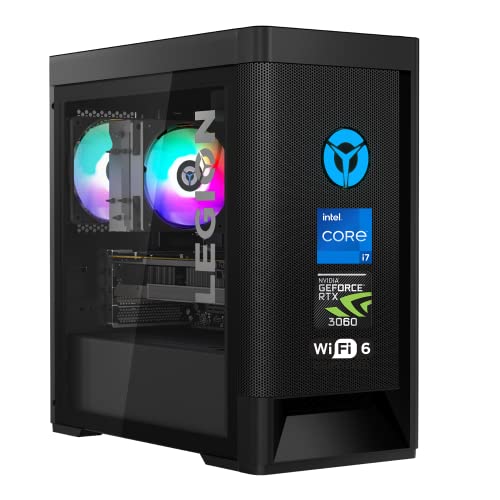