The Lenovo ThinkPad Yoga 11e isn’t what you envision in a dream ultraportable, neither does it match the performance you’ll get from pricier midrange convertible-hybrid laptops. However, it’s one of those choices that are hard to pass by if you need a laptop that can stand up to the bumps and bruises of classroom use and daily commute on the road, it fits the bill well.

With military-grade design, reinforced hinges, and rugged build, the newest Lenovo ThinkPad Yoga 11e (4749894) is one tough midrange convertible-hybrid laptop. It sports the same design from last year’s model, but it adds some processing power with a 1.6GHz Quad-core Intel N3150 processor, 4GB memory and 128GB solid state storage (SSD). It’s one of the few 11-inch ultrabooks that can pull double duty as a tablet and laptop, by simply folding the screen back to 360 degrees.

The Yoga 11e sticks to the all-familiar dark-grey finish that outlines the ThinkPad line. Here we’re looking at an 11-inch ultrabook with rounded corners, a rubberized bumper around the lid to help protect the display, and a pair of reinforced hinges that opens up the screen to four different modes – Laptop, Stand, Tablet, and Tent– to suit whatever you choose to do. It MIL-SPEC (military specification) rated chassis mans that the laptop can withstand the most extreme of temperatures, humidity, vibration, and weight. Measuring 0.9 by 11.8 by 8.3 inches (HWD), and weighing 3.5 pounds, it is slightly thin and lighter than last year’s Yoga 11e, making it quite portable.

The Yoga 11e’s rugged design notwithstanding, it has a well-spaced chiclet-style keyboard that most folks will find comfortable enough, and an equally comfy touchpad. The touchpad offers accurate cursor movement and smooth pinch, zoom. And swipe gesture control. To ensure its resilience to withstand extreme environments, its 11.6-inch touch screen is protected by scratch-resistant Dragontail Glass, which is an industrial equal to Corning’s Gorilla Glass and is up to six times stronger than regular glass.

By using an In-Plane Switching (IPS) display, Lenovo managed to bring bold colors that look great from any angle to an 11-inch laptop, though, its 1,366-by-768 resolution limits you to watching HD videos to 720p, while the HP Spectre x360 – 15t Touch gives you 4K (3840 x 2160) resolution on a slightly larger 13.3-inch screen. Above the display is a 720p camera, while w a Windows hotkey is embedded in the lower bezel.

On the Yoga 11e, I/O options are quite varied. On the right side, you’ll find a HDMI output port, a USB 3.0 port, volume controls and a Power switch. The left side hosts a power jack, an Ethernet port, a USB port with charging capabilities, a headphone jack, and a 4-in-1 SD card slot. The system has dual-band 802.11ac and Bluetooth 4.0 for wireless networking and a SATA 128B solid state drive (SSD) for storage, with Windows 10 Home pre-installed.

Powered by a 1.6GHz Quad-core Intel N3150 processor and 4GB of memory, the Yoga 11e turns out to be a mediocre performer, though slightly better than last year’s model that was outfitted with an Intel Celeron N2930 processor. Released in early 2015, the Intel N3150 is part of the Braswel platform with base clock speeds of 1.6GHz – 2.08Ghz, which is decent for most college tasks.

By combining a Celeron processor and 4GB memory with Intel HD graphics, the end result is a laptop that may not stack up well against expensive workstations and premium systems, but still has the chops to carry most students and office workers through their daily work in spreadsheets, databases, or large Word documents without a hiccup.

The Lenovo ThinkPad Yoga 11e isn’t what you envision in a dream ultraportable, neither does it match the performance you’ll get from pricier midrange convertible-hybrid laptops. However, it’s one of those choices that are hard to pass by if you need a laptop that can stand up to the bumps and bruises of classroom use and daily commute on the road, it fits the bill well. Although its IPS touch screen is responsive and delivers vibrant colors, it’s a relatively low-resolution display for an otherwise superb laptop.

If you want more bang for your buck and need more muscle and aren’t overly concerned with ruggedness, check out our Editors’ Choice midrange convertible-hybrid laptop, the HP Spectre x360 – 15t Touch. If money is tight, the Lenovo Flex 14 might as well be your best bet; it’s not as durable as the Yoga 11e, but it offers better all-around performance. 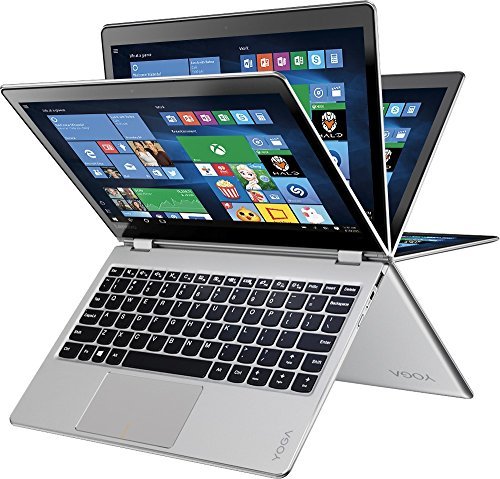