Designed for everyday use, the LG 32MA70HY-P is a huge 32-inch monitor for budget buyers. It uses an In-Plane Switching (IPS) panel to provide rich colors, better image quality, and wide viewing angles. Granted, you don’t get built-in speakers and an adjustable stand with this model, but it compensates with solid images and good contrasts for much less than competitors, making it our top pick for inexpensive extra-large-screen monitors.

Screens like this always look unobtrusive at first. It features a 32-inch Full HD (1,920-by-1,080) panel with a non-reflective coating and a peak brightness of 250 cd/m2. The panel looks vast, dominating the desk, and the black aesthetic draws the eye. It lacks a curve, which is quite common in this range, but for the price it’s a very reasonable package.

Though it looks disarming, at first, when you sit closer, the wide-screen makes loads of sense. It has a 65Hz refresh rate, a 5-millisecond (gray-to-gray) pixel response, a Mega native contrast ratio, and a 16:9 aspect ratio. The screen is framed by thin, black-bezels and is nested in a matte-black cabinet that weighs 14.3 pounds.

It is supported by a curved stand that offers minimal degrees of tilt [-5° (front) ~ 10° (rear)], but doesn’t support height, swivel, or pivot adjustments, not does it have in-built speakers. However, it does have an audio-out port, and it comes with a VESA mounting plate (compatible with 100mm VESA mounts) that you can use to mount the monitor to a wall. You can’t swivel the screen, which is common with widescreens –the ergonomics of the extra-large screens don’t guarantee for such kind of movement.

The LG 32MA70HY-P is easy to set up out of the box –all you do is attach the stand to the rear of the screen and the base easily attaches with a screw – and its ports all face towards the back, making connectivity simple but a bit complex when using the wall mount. LG has included one HDMI port, a D-Sub port and a DisplayPort and audio jack, but it doesn’t have a USB port.

It uses LG’s on-screen commands which is very easy to navigate with accurate response for the inputs. There’s a quick settings menu to adjust brightness, contrast and other options in the Picture menu that allows you choose the picture mode, color temperature and a host of other adjustments. It supports split-screen option, meaning you can work on two projects side-by-side comfortably.

There aren’t many flaws to the monitor’s overall design. The bezels around the screen aren’t thick, adding to the screen’s good aesthetic. There aren’t any speakers, and the lack of USB is painful.

For the most part, though, its superb –offering a good resolution and screen area paired with solid build quality at an affordable price.

The LG 32MA70HY-P started strongly, with impressive out-of-the-box performance. Its brightness level of 250 cd/m2 looks much better than LG’s quoted figure, and its bolstered with a 5M:1 contrast ratio. The high contrast is important, as it makes pictures vibrant, and helps this monitor deliver a wide array of shades –even closely matched tones are easier to tell apart.

On this monitor, we haven’t run into any dead pixels, a common issue among gaming monitors, and backlight bleeding and IPS glow were present, but negligible. As with all good daily use IPS monitors, the LG 32MA70HY-P provides wide viewing angles, with no noticeable color variations or loss of luminance when viewed from any angle.

For gamers, the panel’s 5-millisecond (gray-to-gray) pixel response and 65Hz refresh rate won’t suffice for many games, but it isn’t the worst either. I noticed screen tearing while playing GTA V on the PC and while playing Fallout on the XBOX 360. Many gamers will be hard pressed to find graphic solutions to handle 5K gaming, especially with the release of the Pascal-based NVidia GeForce GTX 1080 Ti graphic cards. If you need to enjoy smooth gaming, the Acer Predator XB271HK offers a few nice features that will appeal to gamers.

The panel’s 10.6-millisecond input lag (time taken for the monitor to react to a controller command) is fairly short, though it doesn’t beat the 9.6-millisecond standard for most gaming monitors. The monitor consumes about 37 watts of power while set to Text mode and 33 watts while set to Movie mode and a paltry 32.7 watts in Power Save mode.

The LG 32MA70HY-P is an excellent choice for designers and photographers seeking a good-size display that offers solid performance at a reasonable price. Its thin-bezel design delivers a seamless viewing area that even permits for two or more monitors to be positioned side by side, and it even offers split-screen support. Moreover, its IPS panel delivers accurate colors and good image quality, and doesn’t use much power, but it’s limited to a 1,920-by-1,080 resolution.

The IPS panel does a good job displaying highlight and shadow detail, and even if its green accuracy is slightly off, it doesn’t interfere with the overall image quality. Wide viewing angles let you share the monitor without worrying about color shifting, while the thin bezels allow for a dual-monitor setup. A more ergonomic stand would be nice, as would at least a single USB port, but neither gripe prevent the LG 32MA70HY-P from earning our Editors’ Choice for affordable extra-large-screen monitors. 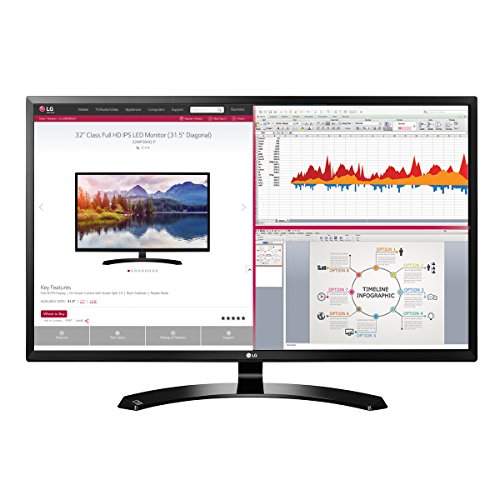