The LG 34UC80-B is a 34-inch curved panel that offers exceptional screen quality and a solid range of features, all at a price lower than its rivals. It doesn’t make so many compromises that would justify the lower price, including lack of speakers which are sensible at the end of the day. It’s an exceptional, affordable choice.

The LG 34UC80-B is one of the most fascinating monitors you can find out here. It sports a huge 34-inch diagonal, and it up its gaming credentials with a gentle curve. It stands out as the only ultra-wide monitor that’s excellent for gaming, watching HD movies, and even graphic-critical work.

And, that’s not its only appealing attribute. It features AMD’s FreeSync, and the panel runs on LG’s own AH-IPS –panel, with 10-bit color depth support. Plus, the panel is factory calibrated to cover over 99% of the sRGB color gamut, which is the industry standard for photo editing and related color-critical projects.

Screens like this often look unassuming at first. The 34-inch diagonal is wide, stretching across the screen, and the curve can’t be missed. For the simple and sleek design, ergonomics includes a -5°/20° tilt, a max of 120mm height adjustment, and VESA mount support. Just like its peers in the 34-inch range, its curvature of 1900R delivers an immersive experience.

Wide and curved screens make loads of sense when watched closely. The LG 34UC80-B’s 3,800mm slides into a gentle arc, thus, image distortion won’t be a problem, instead, the sides tower the screen towards the user. It’s unobtrusive, not distractive.

For connectivity, there are two HDMI 2.0 ports, a DisplayPort 1.2, a headphones jack and a pair of USB 3.0 ports. There is also a USB port which supports fast charging of peripherals, but you’ll have to enable it first via the OSD. While at it, remember that when fast charging is enabled, data transfer to and from the connected device isn’t possible.

It gets a 21:9 aspect ratio, which is practically more useful than taller 4K screens, with the extra width being better for films, and it provides extra screen real estate for working.  If you ever wanted a screen for work gaming, this one has its credentials in order, with immersive scenes on modern titles. What makes it better is the fact that it has more room to maneuver in FPS titles, and even the fastest games really benefit.

The UWQHD resolution of 3,440 x 1,440 pixels has its pros and cons. For instance, with the 21:9 aspect ratio, the screen is able to deliver a rich pixel density of about 110 PPI (Pixels Per Inch). This is arguably the sweet spot between big screen real estate and picture detail, meaning you’ll have both plenty of workspace as well as crisp and vivid visuals.

Most movies shot at the native aspect ratio of 21:9, so you’ll be able to enjoy your favorite shows and movies on the screen. The same aspect ratio is supported by lots of games, but you’ll have to do with black bar at the sides or stretched visuals on certain games. To be safe, first check the basic game requirements before purchasing, although we can guarantee than a number support 21:9 aspect ratio.

The LG 34UC80-B started strongly, with impressive out-of-the-box performance. Its brightness level of 300 cd/m2 looks much better than LG’s quoted figure, and its bolstered with a 5M:1 contrast ratio. The high contrast is important, as it makes pictures vibrant, and helps this monitor deliver a wide array of shades –even closely matched tones are easier to tell apart.

On this monitor, we haven’t run into any dead pixels, a common issue among gaming monitors, and backlight bleeding and IPS glow were present, but negligible. If your system uses an AMD graphics card, it’s possible to use the compatible graphics card to synchronize the GPU’s frame rate with this monitor’s refresh rate. If you do that, you’ll have eliminated screen tearing and stuttering that occurs within the 48-75Hz FreeSync range connected via the DisplayPort connector.

On the other hand, if using an Nvidia GPU, it’s still possible to use the monitor at 75Hz by creating a custom resolution available in the variable refresh rate technology. However, at 75Hz, playability is smoother and with the Dynamic Action Sync feature enabled, the input lag averages ~10ms.

Response time is a vital consideration for gaming screens, and the LG performs very well. Its average response time of 5ms is excellent, anything below 20ms is good for gaming. So far, among similarly priced 1440p ultrawide monitors, the LG 34UC80-B has the best response time speed, with near absent motion blur and ghosting in fast-paced games. There’s a Response Time Control feature in the OSD (On-Screen Display) that you can use to further eliminate ghosting.

Surprisingly, fast-paced games have smoother playability on the 75Hz LG 34UC80-B than competing 100Hz VA-panels with the same 3,440 x 1,440 resolutions, such as the Viotek GN34C as it doesn’t have much blur. However, there are few benefits in using a 100Hz panel including more fluid and smooth visuals on fast-paced games.

Colors remain accurate, their temperature only deviates by a small margin across the entire screen. This is a vital attribute for gaming and movies –meaning they’re important for a multi-use panel like this.

On these sides of gaming monitors category, screen quality is the most important feature and, the LG 34UC80-B delivers: it’s got a higher resolution offering, a great contrast ration, decent black level and the best response time. All these make for accurate colors and maintains good uniformity as well as wide viewing angles despite the screen’s curve and width. It’s one of a kind in the category.

For the price, it undercuts the competition without sacrificing on too many features. The resolution is as high as rivals, and it’s a fine move from its predecessor from last year, making it as better match for cheaper graphics cards and is AMD FreeSync compatible. 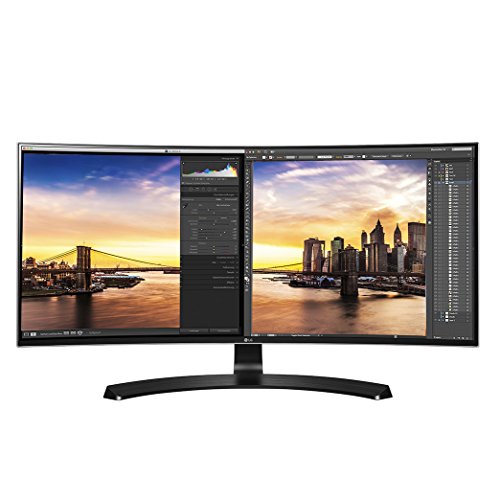 It comes with a few tradeoffs, though. Its default screen settings aren’t the most accurate and you won’t need to use the preset gaming modes, and there aren’t speakers. Build quality and adjustability are fine too. That all said, offers great screen quality, a nicely curved design, with subtle features, and AMD FreeSync – all for less than rivals.

If you’re in the market for an ultrawide display with enough flexibility for everyday use, media work and gaming, the LG 34UC80-B is a gorgeous, powerful all-in-one package.The Acer Predator XB271HU bmiprz remains our Editors’ Choice for its design and immersive gaming features.