The LG Gram 14 is an incredibly lightweight, notebook with speedy performance and all-day battery life. It doesn’t deliver the premium feel you’d expect of a high-end ultraportable, but if portability is a must-have, then it should be on your short list.

The LG Gram 14 (2017) combines the strengths and portability of this year’s 13-inch Gram and makes up with a larger screen as part of LG’s portfolio of ultraportable laptops. It weighs just over 2 pounds, but packs enough processing power thanks to a seventh-generation Core i7 processor and has more storage than most machines in its class.

To that, add almost 15 hours of battery life and what you have in your hands is a stunningly fast, lightweight laptop that will compliment your executive lifestyle. Oh, the design, chassis material, and keyboard lack the premium feel we’d expect at this price.

At first, LG made an attempt at ultra-lightness with the 13-inch Gram, but it came out as rather flimsy, but with the Gram 14 they seem to have gotten it right. It weighs just 2.14 pounds and measures 0.6 by 12.7 by 8.3 inches (HWD), which is ultimately light and compact for a 14-inch notebook.

The light profile is attributed to the nano carbon-and-magnesium-alloy material used in making the body, which is way lighter than most metal alternatives, but better than plastic. Even as LG focused in making a portable 14-inch laptop, we still have notebooks in the same category, with more premium-feeling bodies, so it doesn’t feel like the premium laptop you’re paying for.

Compared: The Dell XPS 13 measures almost the same (0.6 by 12.0 by 8.0 inches) but weighs 2.9 pounds. The size notwithstanding, its aluminum and carbon build has a more premium feel than the gram’s carbon-magnesium alloys. The gram is even lighter than notebooks small its size, demonstrating how LG was dedicated to shedding a few pounds in the new design.

For instance, one of our top pick ultraportables, the Razer Stealth, a smaller 12.5-inch system clad in a metal body weighs 2.9 pounds, further emphasizing LG’s resolve to make its flagship laptops thin.  Overall, even with the lack of metal construction, the 2017 gram 14 does feel sturdy enough for daily commute.

The keyboard features adjustable backlighting –which is a good thing. However, they do feel flimsy especially when compared with their main rivals in this price range. Apparently, they’re not bad –they respond and function well– but the plastic used in construction feels low quality, as opposed to the excellent keyboards found on ultraportables like the XPS 13 and HP Spectre X360. As for the touchpad, it’s well-placed and responsive and so are the speakers that produce enough sound to fill a small room at full volume.

Clear Screen; Would be Better

LG inherited into the Gram 14Z970 the same screen they had in the Gram 13. It’s a 1080p touch display with great picture quality, delivering vibrant colors and strong brightness. It is a glossy screen, though it doesn’t have a reflection problem and the In-Plane Switching (IPS) panel lets you view the screen from far back without distortions.

It does look good, but it doesn’t compare well with laptops in the same price range that feature more superior resolutions, such as the HP Spectre x360 (4K) and the Dell XPS 13 (3,200 by 1,800). In fact, even the 12-inch Blade Stealth offers a QHD display (2,560 by 1,440), thus the gram 14 remains deficient of a sharper resolution and better digital screen accuracy, which is somewhat disappointing.

Even with the slim profile, LG added in a few useful ports and doesn’t go the Apple MacBook way with only a USB-C port.  The Gram 14 boasts a full array of connectors, including a USB-C port, two USB 3.0 ports, an HDMI port, a micro-SD slot, and a headphone jack. Internet connectivity comes via 802.11ac with Bluetooth 4.2. For storage, there’s a 512GB M.2 SSD, which does not only guarantees speedy loading but also doubles the 256GB storage space you get on competitors like the XPS 13, Blade Stealth, and even the HP Spectre 13.

Lightweight, and Speedy Too

Powering the LG Gram 14Z970 is an Intel Core i7-7500U CPU with integrated Intel HD Graphics 620 and 8GB system memory. This is a notable improvement from its 13-inch counterpart’s Intel Core i3, which does count for a lot, especially improved processing power. With a Kaby Lake Core i7 processor, the gram 14 is powerful enough to cruise through everyday productivity and business tasks like calculating multiple spreadsheets, seamless word processing, and even video conferencing.

If you put it side-by-side with similarly priced notebooks, both the XPS 13 and Blade Stealth do perform slightly better, while the HP Spectre 13 will pull about even. Even with that, it is still tricky to compare performance output here since all these laptops have different resolution screens –higher resolutions have been known to pull down scores. The LG Gram 14 has a 1080p resolution, and so being the lowest in resolution, it does take the honors, albeit with a few pauses.

For ultraportables that use integrated graphics, 3D rendering and gaming is always a wash as opposed to dedicated cards found in gaming systems and some workstations. With its Intel HD 620, the gram’s performance on most games is just below par, can’t go beyond 20 frames per second at 720p (don’t even bother in full HD), so you won’t be doing any serious gaming on this notebook. If you must play, you’d try less demanding 2D games, which should run okay, but for most modern games, you’ll have to look at something like the Acer Aspire VX 15  gaming laptop.

Ultraportables are always strong on battery life, and the Gram 14 tends to perfect on that. It will give you anything around 15 hours 27 minutes, which is a major improvement from the Gram 13’s 12 hours 29 minutes, and better than the Dell XPS 13 (10: 34), Razer Stealth (9:17), and HP Spectre 13 (8: 15). Again, a higher resolution screen not only plays a part in eating into resources but also draining the battery, so it is encouraging that the gram 14 will have enough juice to see you through a full day of work or travel.

The LG Gram 14 may not have the most luxurious metallic build that will give it a premium feel like most ultraportables in the same class, but it does stand out as a fast, full-featured, and long-lasting laptop. It is interesting to see how LG finally crafted an incredibly thin laptop into a miniature pearl that weighs barely two pounds and affirms the ultraportable status despite its 14-inch screen.

The screen looks gorgeous, it manages extra storage and offers extended battery life. That said, the competition sees to pack a few niceties for almost the same price range. 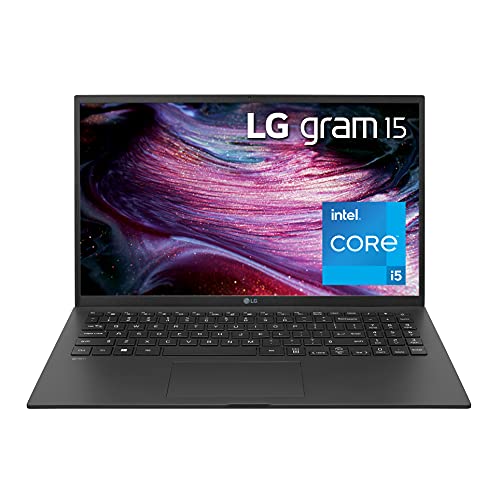 If I’m buying a high-end ultraportable, I want to get the premium feel of whatever I’m paying for, and sadly the gram 14 skimps on that with, a less than solid feel, and a 1080p screen that blurs it as a prime choice. If all you need is a lightweight notebook, then the gram is a good option.

That said, the Asus ZenBook 14 (2021 model) is a refreshed high-end ultraportable, that sports a sleek design, impressive keyboard, and a crisp display. It remains our Editors’ Choice for midrange ultraportables.