The Microsoft Surface Laptop is a stylish, powerful ultraportable that’s a prime choice for university students on budget, and anyone in need of a solid, travel-friendly PC. It doesn’t do much to shake the crowded category as Microsoft expected, but it works hard to stand at the top alongside leaders in its category.

The Microsoft Surface DAG-00005  is the Windows ultraportable PC folks down at Redmond, Washington D.C. have spent the past four years trying to create. It seeks to ride on the Surface Book and Surface Pro’s success. And ‘finally’ we’re seeing Microsoft steer clear of its usual gimmick of releasing a device that’s trying to be new and weird, rather opting for a full-fledged system that can easily compete in a crowded ultraportable category.

It’s a near-perfect laptop that is well-designed and powerful enough to run all your apps, but thin enough for daily commute—features a high-resolution screen, a perfect keyboard and is reasonably priced.

It enters a market crowded between the MacBook (as the gold standard) and the Dell XPS 13  as the Windows alternative for ultraportable well as the surging fortunes of Chromebooks; but we hope the new Surface will win the company new customers, especially students. In fact, the Surface Laptop is being billed as the prime choice for student who’ve always known Apple’s MacBook Air as the epitome of college computing, with a subtle balance of power and portability.

It’s also the company’s vehicle for Windows 10 S, a streamed version of Windows 10 that priorities safety over anything else, but a perceptual rival to Google’s Chrome OS.

At first glance, you just realize that the Surface DAG-00005 is cut from a different cloth, altogether. Just like the Microsoft Surface 2, our review unit has premium looks and easily stands out from the competition. As you open it, a 13.5-inch display slithers from beneath the keyboard, giving an even broader look at the screen. The screen here is a 2,256 by 1,504-pixel resolution panel, with a 3:2 aspect ratio, that offers crisp and sharp picture, although the resolution isn’t quite as good as what you’d find on the MacBook Pro or the Surface Book from last year.

Unlike the MacBook that has refused to get touch capability —even in the 2017 model; the Surface Laptop comes with a built-in touch panel, which is a one-up over Apple’s MacBook. It also supports Microsoft’s Surface Pen (sold separately), and so is the Surface Dial (can only be used on the deskside accessory, not directly on-screen).

The screen doesn’t flip over 360 degrees or detach from the keyboard as you’d expect of many pen-enabled PCs, including Microsoft’s latest Surface Pro. While still on that, we’ve always associated the Surface codename with slate-style tablet, but this one builds on the same idea but its ideally a laptop.

For styling, Microsoft has taken a completely new twist here and introduced a new design element. The Surface Laptop’s interior is covered with in artificial material called Alcantara. In fact, it’s the first thing you see as you flip the lid open, surrounding the keys and palm rests. It’s essentially a tough material derived from of polyester and polyurethane from the 1970s and has been used in cars and boats”. Microsoft offers this device in different colors, but I find the surface laptop burgundy quite satisfying to touch and look at.

Measuring 14.5mm thick, the Surface laptop is tin enough to carry around, and can easily be carried in one hand. At 1.25kg, you’ll find it incredibly light, fairly lighter than a MacBook Pro (but slightly heavier than a 12-inch MacBook Air), and it does look more like the Air. However, the Surface Laptop manages to deliver something the Air did in 2010: A perfect balance of power, utility, portability and good battery life, that most consumers actually want.

There exist some differences between Apple’s Air and the Surface Laptop, and the biggest rests in the hardware. Microsoft did include a big, bright, crisp 13.5-inch touchscreen, with a 3:2 aspect ratio. This is better than the 16:9 aspect ratio laptops, as it looks squarer, giving you ease of scrolling webpages and apps. As for the touch-screen, it looks insanely bright, and is super responsive.

Once again, the Alcantara fabric keyboard set the Surface Laptop apart, as it adds some comfort when typing, as opposed to aluminum-style finishes. For typing, the keyboard yields better than most Windows budget laptops, thanks to well backlit keys with good travel. The trackpad is equally responsive, but it isn’t as smooth as the feel of Apple’s MacBooks, though Microsoft adds up a touchscreen to compensate for the same.

In getting a really sleek Surface Laptop, something had to give–sadly, it’s the ports. Microsoft skimped on a design that rotates into a 2-in-1 hybrid tablet and made it a traditional laptop that doesn’t have a USB-C port that everyone in the industry is trying to push forward. For someone like me, who envisions a single cable that a bummer. Microsoft is really pushing us into #Donglehell, by not including even an SD card slot, and you’ll have to carry a dongle for the camera.

All you have in the name of connectivity is a single traditional USB port (and another one on the brick for charging a phone or tablet), a mini DisplayPort, a headphone jack, and a magnetic Surface Connector for power. Internet connectivity comes via 802.11ac Wi-Fi and Bluetooth 4.0 LE.

The base color is platinum (which is essentially silver-gray), and it’s the only color available for the base model (Intel Core i5, 128GB), so far. To get the other colors. Graphite gold, burgundy, or cobalt blue you’ll have to jump to the 8GB/256GB configuration (which is our review model. Our system is the burgundy model, and I can say it’s the best looking of the bunch, with a fabric cover that crisscrosses the wrist rest and in-between the keyboard keys, and extends to the bottom panel.

For this review, I featured the Microsoft Surface Laptop outfitted with a seventh-generation Intel Core i5-7300 processor, 8GB of Ram and 256GB SSD storage. This configuration is more powerful than the base model that comes with only 4GB RAM and 128GB of storage. That may prove to be way light for some users. With this combination of features, you won’t get any regular slowdowns unless you want to indulge in serious gaming or video editing. This is the model I’d recommend if you decide to get a Microsoft Surface Laptop.

The one important thing you need to know about the Surface laptop is that it ships with a new operating system named Windows 10 S. It’s not ‘new’ per see, because it’s essentially Windows 10 that has been locked down so you can only run apps downloaded from Microsoft’s official Windows Store.

The rationale behind the limitation has lots of benefits and equal share of tradeoffs. For instance, it means Microsoft is able to vet each and every app that goes into your system for malware. It also means that apps that would otherwise chew your resources and haggle down your battery are easily monitored, and you can easily receive more relevant security updates and patches.

For all those benefits, there’s a caveat, though. Ask yourself, is the lockdown worth considering that the Windows Store is a desert most of the time. It’s unlikely that you’ll find most of the apps you need there, and if there, they may not be better than what you get from the Apple Store for iPads, or Mac, or even the web. Additionally, you can’t change the default browser from edge to something like Chrome or Firefox (both aren’t in store).

When you download an app instead of installing the .exe file, a Windows pop up suggests to find it for you in the store. Surprisingly, Microsoft occasionally points you to alternative apps available in the store, which can be unfair. If you need the freedom you’re used to, it is possible to switch from Windows 10 S to Windows 10 Pro free (as of now and we hope it will be throughout the year and beyond), and it takes just a few minutes.

Battery life is equally excellent. I managed over seven hours, and on regular use it stretched to a little over eight. If you use it sparingly, with few apps open, you can easily clock 9 or even 10 hours. Microsoft claims that you can hit 14.5 hours of video, what they mean is full-screen video playback only, but that’s not how people use computers, you need other apps as well.

The Microsoft Surface is a very well-designed, nice-looking ultraportable system that is configured to impress with good battery life, a brilliant touch display and excellent build-quality. The configurations enable it to stand alongside top competitors in its category, but it doesn’t necessary surpass them.

For instance, the Surface Laptop was an ambitious project to disrupt the glory of Chromebooks and Apple’s MacBooks, but apart from a touch screen that you can’t get on any MacBook, there isn’t much you’re getting, which Chromebooks remain prime budget educational devices.

Personally, I found it exciting to use, but like most systems of its ilk, it’s just a remix of familiar components packaged differently. So, you should feel free to choose between the new Surface Laptop, Apple’s MacBooks based on the look and feel, but be assured you aren’t losing much in terms of performance. Should you go the Surface Laptop-way, I’d recommend the step-up model, Microsoft Surface DAG-00005 that features a Kaby Lake Intel Core i5 processor, 256GB SSD storage and 8GB system memory. 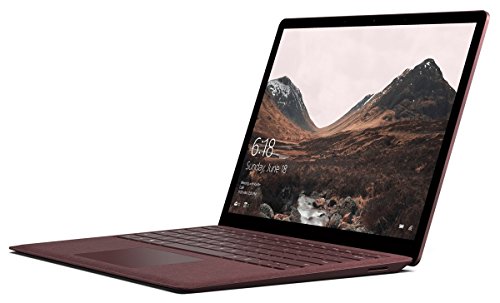