The MSI Aegis RS 12TG-284US is a powerful gaming desktop that doesn’t compromise anything, and it still manages to hit a price below the competition. It offers value that’s simply hard to beat elsewhere.

Given the high prices of graphics cards right now, buying a prebuilt gaming desktop like the MSI Aegis RS seems like the only reasonable choice to enjoy PC games. You’ll spend a little less than scouring for individual parts on your own, but a little more than in the past. The model we’re reviewing – the 12TG-284US isn’t the most powerful around, but it makes a compelling argument to go prebuilt with a price lower than hunting down for parts to DIY the machine yourself.

It’s among the best prebuilt PCs for 2022, with a unique design that allows for future upgrades and a price that’s too good to ignore – it can be had for around $2,000. Similar PCs from Asus and HP will cost a lot more, and MSI doesn’t skimp on extras on its gaming PC line. Things like a fully modular power supply and DDR5 memory come standard.

For a little less, the iBuypower Pro SlateMono 237i packs the same feature set RTX 3070 Ti, while the CyberPowerPC GXiVR8080A28 maxes out with an Intel Core i9-12900KF and a GeForce RTX 3070 graphics card. MSI also offers an RTX 3060 Ti version (12TG-285US), which offers almost similar performance, so the performance of this model should apply too, maybe with slight performance differences.

If you’re shopping in the sub-$2000 category, it’s tough to beat the MSI Aegis RS. However, a few oversights in the build and some small issues with the case illustrate what spending extra on a machine like the Alienware Aurora R14 can get you.

If you’re used to prebuilt PCs, then you’ll notice how nice the Aegis RS looks. This piece of kit is a showstopper. While it doesn’t look like much when it’s powered off, just power it on and the first allure of RGB confirms why MSI is the king of lighting. The machine looks charming when it’s all lit up, and it even comes with a dedicated LED button to change up the lighting if you don’t want to use the included software.

The RGB lighting is so pronounced because MSI includes many fans in the RS 12TG-284US – six in total, distributed across the front, top, and back. This is a lot of bling, and they can get a bit loud under heavy load. But they look great if you like some LEDs on your ideal machine. They’re MSI’s own fans, meaning they come with frosted blades, allowing the RGB to evenly shine through.

Moving away from the lighting, the case itself isn’t too impressive, it’s just a typical standard size and form factor as any mid-tower ATX case you’d find in the market. The only addition is that angular front panel with an MSI badge in the center, and it’s functional beyond just looks.

A tempered-glass mid-tower is always problematic with limited airflow, but the MSI Aegis RS 12 cleverly avoids that issue. The unique front panel is almost entirely open, allowing air to overflow into the case. MSI goes further to even include a dust filter upfront, so cleaning is very easy down the line.

A stubbier case design like the one on the HP Omen 30L looks fantastic, but the MSI Aegis RS still looks great. You’re getting a powerful gaming rig with well-deserved improvements, and when it comes to lighting, it’s hard to beat.

Simply said, this gaming PC offers all the ports you need and some more. A USB-C connection on the front is more useful for external SSDs like the Samsung T5, and the sublime selection on the back suffices for almost all your peripherals.

The MSI Z690 Pro motherboard used here is great, too. This is the Wi-Fi model, so it supports Wi-Fi 6E and Bluetooth 5.2. It also gets a 2.5 Gigabit port, which allows you to get to speeds above the standard Gigabit connection if you have fast enough internet.

The Nvidia GeForce RTX 3070 Ti is a sweet-spot graphics card and paired with the 12th Gen Intel Core i7-12700KF on the MSI Aegis RS 12TE-284US, the result is immersive gaming performance. Although all GPU prices are yet to get cheap (thanks a lot to GPU shortage), the RTX 3070 Ti still hits a great value mark, in between the RTX 3070 and the RTX 3080. It’s more than enough for 1440p, with just enough pep to make 4K playable, especially with upscaling in the mix.

On the Shadow of the Tomb Raider benchmark (1440p, highest settings), the high-end CPU and cutting-edge graphics card deliver good performance, averaging 123 fps which is enough pixel-pushing ability to keep it ahead of the similarly configured iBuypower system (107 fps.) However, the Corsair ONE i300 (156 fps) and Alienware Aurora R13 (168 fps) machines with higher-end RTX 3090s perform markedly better.

Stacked up against the slightly more powerful RTX 3080 in the HP Omen 30L, the MSI Aegis RS holds its own. It is fairly faster in Fire Strike and within a few points in Time Spy, and it shines in Assassin’s Creed Valhalla. This is the newer Core i7-12700KF at work, which can boost your frame rate in open-world games like Valhalla.

At 1440p, the Nvidia RTX 3070 Ti is an absolute powerhouse, blowing through most AAA titles with at least 60, but mostly around 100+ fps. Even in Metro Exodus: Enhanced Edition without DLSS, the RTX 3070 Ti sits pretty at 69 fps at 1440p – and that’s with all the shiny ray-traced effects enabled.

Even at 4K, the Nvidia GeForce RTX 3070 Ti in the MSI 12TG-284US remains unshaken. In games like Dirt 5, Final Fantasy XIV, and Horizon Zero Dawn, the RTX 3070 Ti has no problem at all staying well above 60 fps at max settings, making it an easy choice if you play a lot of MMOs and want to play at 4K.

Both of these chips come with 12 cores, but only eight of those cores are performance-focused on the Core i7-12700KF. Still, it outperforms the 12-core Ryzen 9 5900X in Geekbench and gets within striking distance in Cinebench. Elsewhere, the flagship Core i9-12900K in Corsair ONE i300 is about 15% faster, but the Core i7-12700KF remains excellent for productivity and content creation.

If you’re a professional creative or artist, a higher-end configuration is better. However, for the hobbyist who wants to game and stream, edit a few YouTube videos, or dive into 3D modeling, this midrange MSI Aegis RS 12 configuration is a perfect choice.

The MSI Aegis RS 12TG-284US is a powerful gaming desktop that doesn’t compromise anything, and it still manages to hit a price below the competition. It comes in various configurations to choose from, and it uses parts from known vendors so you can easily upgrade it down the road. MSI even includes a fully modular power supply and a motherboard that supports Wi-Fi, while most vendors don’t.

If I was to create my own gaming PC, this is exactly how I’d do it. But, top-tier graphics cards and other requisite parts are hard to come by, I’m glad MSI has done it for most of us, at a reasonable price. While it has a few problems, particularly the build quality and the case aren’t great, it’s great to see MSI sacrifice the aesthetics here than with the other components.

A little more attention to detail like what Dell has done with the Alienware Aurora R14 would go a long way, but the MSI Aegis RS 12 is still a fantastic machine in the top=tier of prebuilt gaming PCs.

As a whole package, the MSI Aegis RS 12TG-284US is a powerful gaming rig with few frills. If you need a PC to play games, this will stand up, even in 4K with the right settings. 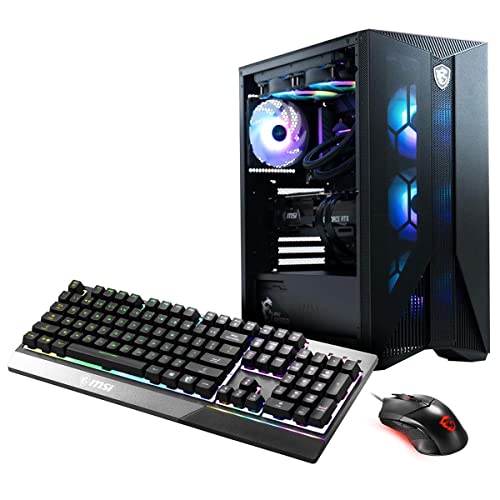 Should you buy the MSI Aegis RS?

Yes. With the Aegis RS, MSI is offering an incredibly powerful prebuilt PC that’s cheaper than DIYing a similar one with identical hardware. It looks great, is a strong performer, and can be had at a very reasonable price.