The MSI Creator 15 A10SFS-287 made its debut at CES 2021, and before the year ends, its already available in the market. The laptop features a powerful processor and is designed for creative work, such as photo and video editing.

Our review unit feature an eight-core Intel Core i7 processor and XXXL-size battery to distinguish it from the rest of the pack by delivering excellent performance and almost 10 hours away from the mains. While it doesn’t come with a mini-LED display, like the one available on the MSI Creator 17, it still is a lot suaver compared to the similar MSI P65 Creator 9SF.

That said, a few items hold it back from earning our Editors’ Choice award (such as a hot-running chassis and ‘meh’ keyboard), but we still recommend it over the Asus ProArt StudioBook 15 for its solid feature set.

Once again, the Creator 15 is a superior alternative to the Razer Blade 15 Base Model, which is great for gamin. But doesn’t offer as much performance for the bucks you’ll be spending on it.

The Creator 15 looks more like MSI’s GS66 Stealth 10SE-039. However, it swaps the gaming model’s high-refresh display for a 4K one; changes out the RGB-rainbow keyboard backlighting for white-only per-key lighting, and instead of black, it goes for an all-gray chassis. Of course, there are software differences that we’ll cover later.

The Creator 15’s lavish gray exterior is all metal and is well built. I like the way you can open the lid to 180 degrees flat, a potentially position for collaborating with colleagues – I just wish it had a touch-input display.

Measuring 0.72 x 14.1 x 9.8 inches (HWD), this laptop is wholly portable for a rig packing a 15.6-inch screen. MSI lists its weight at 4.63 pounds, though it feels slightly heavier. Still, the MSI Creator 15 is best used as a stationary desktop computer – its bulky and runs fairly hot so you won’t want to use it on a lap or away from a surface.

The MSI Creator 15 offers a standard port selection, but with only one USB Type A port, the fact remains that users will need to work with adapters. These can be used on the solo USB Type C port, while the Thunderbolt 3 can be used for a variety of applications.

The laptop’s ventilation holes on either side have been pushed towards the from, and that means one thing, you will definitely have some cables in the way, depending on what you use the ports for. There’s also an HDMI port and an SD card reader; wireless connectivity comes in way of Intel Wi-Fi 6 and Bluetooth 5.1.

My review unit comes with a 4K (3840×2160) screen that checks all the core boxes for creative work. Its gorgeous display surface produces a clear picture and, surprisingly, it doesn’t carry the distracting reflections of some glossy screens.

The hinges supporting the display are properly stiff to minimize wobble when collaborating, yet they still allow for one-handed lid opening and use. With good color coverage (MSI rates this panel at 72 percent of NTSC gamut, or close to 100 sRGB coverage) and ample brightness, this is without a doubt one of the best screens you can get in a workstation laptop for professional creators.

The MSI A10SFS-287 notebook offers a good contrast ratio of 1326:1 and peak brightness of 464 cd/m2, both combined with the aforementioned 75 percent (AdobeRGB) create a vivid and clear screen content.

The preinstalled MSI Creator Center lets users adjust the color display of the screen themselves, and that comes handy for custom color profiles during use.

The MSI laptop has comfortably sized keys and two levels of white backlighting are the main highlights for the Creator 15’s island-style keyboard. Its shallow 1.5mm key travel makes for easy typing, but the tactile feedback is quite minimal.

This keyboard’s layout problem arises from its origins, MSI’s own gaming notebooks. The wider-than-normal left Ctrl key forces the Function (Fn) key to the extreme right of the spacebar, making Fn-key combos difficult. Swapping the FN key with the Windows key in the MSI Creator Center trades one problem for another, as it makes Windows-key difficult as well.

MSI uses a wide clickpad with a surface that’s responsive to swipes and touch. The integrated fingerprint sensor doesn’t get in the way of clicks and can be activated easily both by touch and by mechanical pressure. The excess width could be useful for tracking wide in apps like Photoshop, but its usefulness on day-to-day usage is minimal.

All told, this configuration is powerful hardware for the money. Most competing notebooks in this price range include maybe six-core/12-thread Core i7 chip, like the Razer Blade 15 Base Edition; it comes at a hefty premium for an admittedly gorgeous OLED 4K/UHD touch display. Meanwhile, the Creator 15 is a super-bargain next to the non-touch HP ZBook 15 Create G7.

Though marketed for professional creative – video editors etc., the Creator 15 plays nice with games, too. At 1080p on ultra (or highest graphical setting), the Creator A10SFS-287 averages 71 fps in Total War: Warhammer II, 76 fps in Shadow of the Tomb Raider, 88 fps in Far Cry, and 191 fps in Overwatch, with ray tracing off.

All that performance is in line with what the Nvidia RTX 2070 should get in a system specced like the MSI Creator 15. And with a display that refreshes at only 60Hz, you don’t really need a more powerful graphics card.

On a single charge, the Creator 15 delivers a decent seven hours 38 minutes on typical use – not the up to 10 hours of battery life MSI advertises for this laptop, but battery mileage will always vary depending on how far you push the machine. However, compared to other mobile workstations, seven hours is just okay; Dell XPS 15 and MacBook Pro 13 both have battery lives of over eight hours.

The MSI Creator 15 blends the right features to earn our nod in the creative category. These include a sleek, stylish-yet-professional design; an eight-core Intel Core i7 processor, Nvidia RTX 2070 graphics card; a vivid, high-res (4K) display, a standard IR camera, fingerprint reader; Wi-Fi 6; and nearly 10 hours of battery life. That’s an outstanding resume for any creative notebook.

Though it is held back by just one USB Type-A port, and its hot-running chassis, that keep it from earning our Editors’ Choice award, but those downsides can easily be overlooked.

All said, the Creator 15 is a superior performer than both the Asus ProArt StudioBook 15 and the Razer Blaze 15 Base Edition for around the same or less money. Mind the heat, but seriously put the MSI Creator 15 A10SFS-287 on the short list. 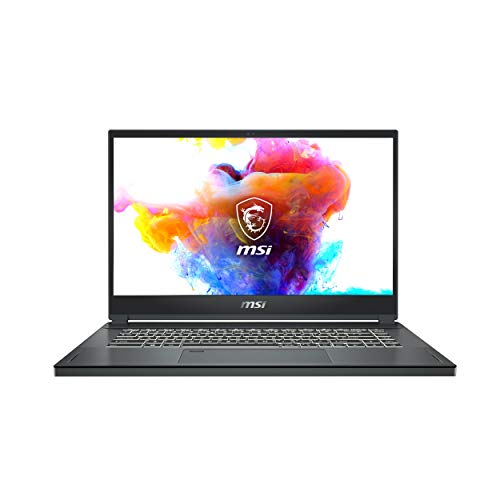