The MSI Creator Z16 (A11UET-043) is a competent laptop marketed for professional creatives but is actually a hybrid device for content creators and gamers alike. While it attempts to excel at both, it faces a quagmire that makes it a toasty middle ground than a champion of both worlds despite its great performance and value.

The MSI Creator Z16 is a professional laptop that combines the benefits of a mobile AAA gaming laptop with that of a mobile workstation, designed for creatives as an Nvidia Studio laptop. MSI already offers some of the best gaming and hybrid-style professional ultrabooks, but it seems MSI Creator Z16 is created to take on the Apple MacBook laptops with powerful hardware optimized for pro-creatives.

Our review unit, the MSI A11UET-043 is inspired by the MacBook Pro series, but the standout feature must be that 16-inch 16:10 display, which is lately the ‘Swiss Knife’ among professional creatives, bolstering productivity alongside a stylish, timeless design. While it doesn’t come with design flourishes and fashion statements over flashier products like the Acer ConceptD series, it packs some incredibly powerful internal components that make it a perfect shoo-in for a wide range of content creators.

Professional video and photography editors will love the display’s 100% DCI-P3 color coverage and touch screen, while anyone looking to run modern AAA games on the side will appreciate the 120Hz refresh rate backed by an Intel Core i9-11900H CPU and Nvidia GeForce RTX 3060 GPU.

Overall, the MSI Creator Z16 is a fine-tuned creative laptop, that will not disappoint if you bought in a sale, but its steep price tag isn’t so appealing especially when you realize there are better-optimized devices with better specs available for less.

The MSI Creator Z16 can be described as a laptop that offers the ‘best’ of both worlds, with an appeal to creative professionals who want the power to run demanding games as well as equally resource-intensive applications. It’s a pretty innovative approach that hasn’t phased out the idea of a gaming laptop to sport outlandish RGB lighting and an edgy chassis.

The only downside of being an all-rounder is that better creative workstations and standalone gaming laptops are available at much lower prices. If you don’t mind having a machine with a ‘gamer’ design and sole lights RGB s on the body, a device with better specifications than our review model can be picked up for under $2000, such as the Asus ROG Strix Scar 15 (Intel Core i9-12900H, RTX 3070 Ti), but you sacrifice the 16:10 aspect ratio.

Again, the only GPU option on the MSI Creator Z16 being an RTX 3060 feels a little underwhelming, and it could have benefitted greatly from an additional option for an RTX 3070/3080 for those who need a little more power. MSI didn’t include an HDMI, instead, you have Thunderbolt, but that’s still a bother for anyone who frequently uses additional displays, and makes the A11UET-043 incompatible with equipment like graphics drawing tablets.

The MSI A11UET-043 design is going to be a mixed bag, but there’s a lot to love about this machine. It comes in plain metallic grey color with an MSI dragon on the lid, but it’s etched in such a way that it’s difficult to see unless you catch it in the right light. MSI plays things safe by not including any frills or a bold design, as we see in most gaming laptops. That’s a clever design approach, as you now have a laptop capable enough to run modern AAA games, but it has the looks to rest easy on the office desk.

Generally, the design is OK, nothing obtrusive but it feels a little boring when you consider what is being offered elsewhere. The muted industrial look is fine and we can say it’s a breath of fresh air from the blazing vents and flashy RGB lighting available on gaming laptops out there.

Its build quality is sturdy and the chassis is constructed from solid metal, weighing in at 4.9lb and measuring 14.13 x 10.08 x 0.64 inches. At that size, this notebook is perfectly portable and it will fit into a standard backpack with ease, and the solid construction feels reassuring if you need a laptop to tote on your daily commute. You can carry it around to college, work on cross-country flights and it will not suffer any scratches at all.

The only drawback, however, is that for some reason MSI didn’t include an HDMI or Display Port, which is unusual given how useful they are in both creative offices and gaming environments. You’ll have to dock the devices using the thunderbolt connections via a docking station, but that’s still not enough for anyone who needs to use a graphics drawing tablet for their projects.

The touchpad is on the small side of things given the amount of space available on the base of the laptop. The keyboard has the same issue, appearing too small for the device itself, but typing on it is a fantastic experience altogether. You’ll need some time to get used to it from a design perspective, but it still offers a comfortable typing experience. This keyboard is powered by SteelSeries, which is popular for its gaming keyboards, but besides the RGB lighting, there’s nothing to suggest this is a ‘gaming first’ keyboard.

The MSI Creator Z16 is an official Nvidia Studio laptop, a badge awarded by Nvidia that designates that the machine has been designed from the ground up with creative professionals in mind. In the case of the Creator Z16, the display emphasizes that badge more than anything else.

It’s a 16-inch screen with slim bezels, much like the MacBook Pro. Far and above the MacBook Pro, however, the MSI Creator Z16 offers a touch display that comes in handy when shuffling through webpages and applications, giving it an edge over the Apple flagship.

In practical terms, having a 4K display isn’t a requirement for a creative machine, and its inclusion would certainly push down the refresh rate but for such a steep asking price, it feels like you’re not getting the best bang for the buck by trying to compromise between playing games and editing high-resolution photographs and video footage.

The screen is bright enough, measuring in at around 397 nits which is above average for a premium laptop, but the display is rather glossy which makes viewing the screen in a brightly lit environment difficult. You shouldn’t run into any issues viewing the laptop indoors, such as in an office, just remember to stay away from open windows during the day.

Under the hood, the Creator Z16 gets all the power a creative would ever need. It packs an 11th-gen Intel Core i9-11900H processor and an Nvidia 3060 CPU, this is almost all you’d ever need to power the most demanding applications, making this laptop perfect for video and photography editors. We’d have easily recommended it for digital artists if only it had an HDMI port, but if you use a mouse for sculpting or rendering, then you’ll find this machine much more valuable.

The 32GB of RAM and 2TB SSD storage on our review unit is fine for playing games and storing huge files, and it’s certainly ideal for actual creative work, managing over 25 or so Chrome Tabs alongside Photoshop and the laptop won’t show signs of slowing down, this is actually what you expect from a device packing some serious hardware.

The RTX 3060 GPU is also the only graphics card option available across all the different MSI Creator Z16 specifications we’ve seen, so either way, you’re only getting 6GB VRAM. Again, this is enough muscle to play more recent games, boosted by Nvidia’s DLSS and Ray Tracing technologies. Once again, for the price, we just wish it had more powerful mobile hardware like an Nvidia or AMD workstation or even a beefier model from the current RTX 30 series.

Still, it plays modern games fine at even high settings. For instance, it averages 44 fps in Cyberpunk 2077 at max settings with DLSS enabled, so its moniker of a capable ‘part-time’ gaming laptop is wholly justified. It’s well suited for running less-demanding games like Valorant that will take advantage of the 120Hz display.  The 720p webcam is just mediocre, but most laptop webcams are, it’s a bonus to get a better one on a device like this.

The battery life’s appeal depends on if you’re coming from a gaming or workstation angle, lasting 6 hours 13 minutes in PCMark 10 battery simulation, and 6 hours over a looped video playback test.

As a gaming laptop, that’s quite commendable with most laptops averaging 4-5hour, but we’ve seen the Asus ROG Zephyrus last over 8 hours on a single charge. Others like the Alienware m15 R7 are incredibly popular gaming laptops with solid hardware, but can barely crawl past the three-hour mark.

For a portable workstation that’s far below most machines in this range, like the Dell XPS 15 and MacBook Pro-16-inch that last well over 12 hours on a single charge. So, if you’re planning on staying away from a power outlet, you might want to consider the Creator Z16’s battery potential before buying.

Should you buy the MSI Creator Z16?

The MSI Creator Z16 is a competent professional creative’s mobile workstation, that would be an ultimate prosumer workhorse if only MSI had given you options of an Nvidia RTX 3070 or 3080, instead of just the mid-tier 3060 at a price that can get you better elsewhere.

That said, the Z16 easily handles every photo and video editing task you throw at it. With its gorgeous, QHD touch display, powerful Intel Core i9-11900H CPU, 32GB RAM, and large speedy 2TB SSD storage, the GPU doesn’t look like a dealbreaker at all.

Sure, competitors are offering much better machines and value in that matter than MSI is offering with Creator Z16: For a little more money, Apple offers the MacBook Pro (with Apple M1 Max Chip) that features a higher-resolution 16-inch, 16:10 aspect ratio display, a 10-core CPU and a 32-core GPU. And, if you don’t mind some RGBs on the chassis, the Asus ROG Strix Scar 15 (Intel Core i9-12900H, RTX 3070 Ti) is another great alternative that will set you back almost $1,000 less. With both alternatives, however, you sacrifice the touch screen. 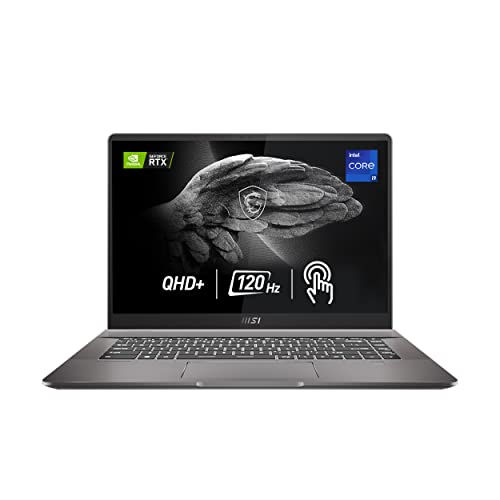 Overall, there’s much to like about the MSI Creator Z16 (A11UET-043) professional laptop. This is an elegant, punchy performer for all its worth, provided you can look past the slightly steep asking price. If you’re a professional content creator looking for a powerful MacBook Pro alternative, this MSI Creator Z16 will save you some money compared to a similarly specced Apple.