The MSI GL62M 7RD-1407 is an entry-level gaming laptop, designed for anyone who fancies playing on the move and not willing to spend so much on an ultra-gaming laptop.

The MSI GL62M 7RD-1407 is an entry-level device that checks all boxes in the prosumer gaming league. Its pricing and classification in the MSI line-up point towards a system will fit into a tight budget, but still deliver excellent playability. Its spec sheet sits on the sweeter side of entry-level gaming systems: Nvidia’s GTX 1050 GPU, a 7th Gen., Core i5 CPU, 8GB memory and 256GB solid state drive (SSD) storage option.

Nevertheless, it isn’t the most powerful system in its category, but for anyone in need of a portable system for paly and work on the move, it’s a real deal. If you need something with a thin profile and lighter than the Acer Predator Helios 300, our Editors’ Choice, then you should seriously have the MSI GL62M 7RD at the top of your list.

MSI uses the same case as most of its predecessors in the MSI GL62M-line, only that it gets thinner here. And a few more differences too. Like, the MSI 408 doesn’t get an optical drive, which is a sacrifice you need to embrace in getting a slender device. The body is mostly matte black plastic, with a thin red accent on the rear, joining the dual fan grilles. MSI laptops are meant for expandability, and to achieve that you’ll have to remove the underside.

The matte display features full HD resolution and In-Plane Switching technology that offers wider viewing angles, but the effect isn’t well prominent when the screen doesn’t have a glass coating. If you factor the new graphics card, 1080p is still ideal for notebooks, which aren’t configured to compete with desktops that run QHD+ OR 4K resolution, but you don’t get meaningful performance drops.

The SteelSeries keyboard is well designed and comfortable to use. It boasts single backlighting and an anti-ghosting key. The red lighting pattern with a silver lining across the three zones is well-crafted, the keys are comfortable to type on, but too much travel makes them feel somewhat bouncy. The touchpad is slightly offset towards the left, but its smooth and sturdy; with responsive left-and right-click functions just beneath the touchpad.

Port options on the GL62M are plentiful and varied, considering that you won’t be doing VR gaming –that takes up a few of your ports at once. That feature isn’t supported on GTX 1050 cards, but if it’s a must-have, you’ll have to grab a system with a GTX 1060 GPU and above which supports that capability.

The storage option here is a 256GB solid state drive (SSD), which you can easily swap with a bigger capacity drive. While not a lot for all your files, it’s a better option as compared to a bigger capacity rotating hard drive. Its sibling, the MSI GL62M 7RDX-1408 packs a 128GD SSD alongside a 1TB, 5,400RPM hard drive. This is more than the Acer Predator Helios 300’s storage options as it only offers a 256GB SSD but skimps on a storage hard drive.

Alongside Nvidia’s GeForce GTX 1050 (with 2GB DDR5) graphics card, the MSI 7RD is equipped with an Intel Core i5-7300HQ processor and 8GB RAM. The CPU’s base clock is 2.5GHz, but it can stretch thanks to Turbo hitting a maximum of 3.1GHz (four cores). These clock speeds are almost 200MHz higher than what you’d get from its direct Skylake competitors (Intel Core i5-6700HQ).

For that, the system yields better results in benchmark tests (4819 on PCMark 8, and 142 points on CineBench R15), and it gets a performance boost as well. However, any meaningful in performance isn’t directly a result of change in architecture, apparently Kaby Lake and Skylake aren’t so different–focus is on energy efficiency.

Given the new graphics system, though, we’re more interested in the 3D and gaming performance. With the new GeForce GTX 1050 graphic card, Nvidia adds an entry-level range model to its GPU line-up in early 2017. It belongs to the Pascal generation, with support for DirectX 12.

It features a 2GB GDDR5 VRAM, making it a better performer over its predecessor the GTX 960M. The GL62M performs about 10 percent better than the ASUS ROG G752VT-DH72, thanks to the new GPU and efficient cooling system that allows the system to seamlessly clock higher speeds.

The system is muscular enough to play modern PC games smoothly. It won’t give you the butter-smooth frame rates you’d get from high-end systems like the ASUS ROG Zephyrus GX501, but it still delivers playable frame rates on Full HD resolutions –Resident Evil 7 (56FPS); GTA V (65 FPS) and Need for Speed (61 FPS).

If you intend to run games in 4K on an external display, the GPU might disappoint. It isn’t cut for such a requirement, you’ll have to look at a notebook with a GTX 1060, like the Acer Predator Helios 300, or even better, a GTX 1070 or GTX 1080.

As always, this ilk of gaming notebooks are just portable enough to allow you move in a pinch to your next destination, but they aren’t designed for use all-the-way.

The MSI GL62M 7RD-1407 need not struggle to be an affordable entry-level gaming notebook. Not that it is the cheapest, but it’s uncommon to find an MSI ringing a price that can …just maybe – get you a desktop replacement, at the very best. It wouldn’t be a stretch to label it a budding prosumer’s choice, as it inches closer to a desktop than most notebooks in the same category can on all but form factor.

You’re going to carry it with you often, it will fit into a backpack, it features the latest GTX 1050 graphics category and scores well on productivity alike. That said, there is a good screen and gaming aesthetics than its rivals, and, it’s hard to recommend it on anything but the newest graphics card, powerful processor and elegant design, especially at this price.

The MSI GV62 8RD-200 (released mid-2018) is a newer version of the MSI GL62M 7RDX, with the same components, but adds 16GB Intel Optane Memory and Coffee Lake chip (New Intel 8th Gen Core i5-8300H). With this module, it amends the only issue we had with its predecessor –lack of a solid-state-drive (SSD). 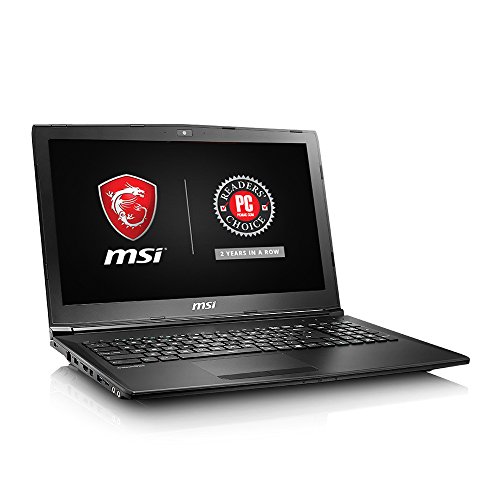