The MSI GL62M 7REX-1896US sports a timeless, portable design that will appeal to anyone who is frequently on the move and want to carry games along, to avoid the hustle of connecting to an external display. Its performance is good, but isn’t the best among its midrange competitors that offer even better components.

Unless you have a sky-high budget, getting that ideal gaming laptop will always attract a few compromises. The MSI GL62M 7REX-1896US  is one of those systems that satisfy that premise, but not prohibitively so. Its GPU is fairly new in the gaming scene, but it doesn’t meet the recommended threshold for virtual reality headsets, and it cannot produce the same frame rates we’ve seen from similarly priced competitors like the Acer Predator Helios 300, that readily offers VR capability.

Nevertheless, the base specification does not sound bad: Kaby Lake quad core processor, Nvidia GTX 1050Ti, 8GB RAM, 126GB SSD + 1TB Hard drive storage. That combined with a slightly thinner and lighter profile makes it an appealing for folks who need to play on the move.

MSI uses the same case as most of its predecessors in the MSI GL62M-line, only that it gets thinner here. And a few more differences too. Like, the MSI 408 doesn’t get an optical drive, which is a sacrifice you need to accept in getting a thinner device. The body is mostly matte black plastic, with a thin red accent on the rear, joining the dual fan grilles. MSI laptops are meant for expandability, and to achieve that you’ll have to remove the underside.

Overall, the design is stylish and has the gaming allure in the right portions. In fact, it’s a system you might be tempted to use in the office –were it not for the red accents and ‘gamer-inspired’ SteelSeries keyboard. Portability is something MSI attempted to perfect in this system, and at 1.06 inches thin and just over 5.29 pounds, the GL62M is extremely portable over its 17-inch siblings, like the MSI GL72M 7RDX-800 (1.16 inches; 5.29 pounds). If you need something even more portable, the Asus ROG Strix GL502VM is worth a long look; measuring 0.9 inches thin and weighing 4.9 pounds, but packs a better GPU and is VR-ready.

The 15-inch matte display features full HD (1920-by-1080) resolution, and uses In-Plane Switching technology that offers wider viewing angles, but the effect isn’t well prominent when the screen doesn’t have a glass coating. If you factor the new graphics card, 1080p is still ideal for notebooks, which aren’t configured to compete with desktops that run QHD+ OR 4K resolution, but you don’t get meaningful performance drops.

The built-in SteelSeries keyboard is well designed and comfortable to use. It boasts single backlighting and an anti-ghosting key. The red lighting pattern with a silver lining across the three zones is well-crafted, the keys are comfortable to type on, but too much travel makes them feel somewhat bouncy. The touchpad is slightly offset towards the left, but its smooth and sturdy; with responsive left-and right click functions just beneath the touchpad

Port options on the MSI GL62M 7REX-1896US are plentiful and varied, considering that you won’t be doing VR gaming –that takes up a few of your ports at once. That feature isn’t supported on GTX 1050 cards, but if it’s a must-have, you’ll have to grab a system with a GTX 1060 GPU and above which supports that feature. On the right flank is a USB 2.0 port, an SD card slot and the power jack.

This system fuses a 256GB SSD (for Windows and programs) and a 1TB 5400rpm hard drive for storage. This combination offers ample storage, but it’s surprising to see a slow hard drive make its way here, instead of a faster 7200rpm, but it isn’t a deal breaker. This is more than the Acer Predator Helios 300’s storage options as it only offers a 256GB SSD, but skimps on a storage hard drive. While 128GB is a little tight once you install games on the drive, the system is practically upgradable, so you can swap it with a bigger capacity SSD.

For a gaming laptop, the graphics card is perhaps the most important component. The MSI GL62M 7REX-1896US packs an Nvidia Geforce GTX 1050 Ti with 4GB of GDDR5 memory. This is part of Nvidia’s latest line of Pascal architecture, and largely replaces the GTX 965M used in previous midrange gaming laptops. Unfortunately, even if it’s a newer card, it doesn’t translate to class leading performing. It is an average performer on most AAA games, and when you tone up the settings playability tends to suffer.

While not playing, the 7REX’s seventh-generation Core i7-7700HQ chip, speedy hybrid storage drive configuration and 8GB of RAM (max 32 GB) can most certainly handle any productivity tasks, as well as any demanding tasks like video editing. For that profile, it stacks well as a system that can perform well on specialized media tasks, like converting audio files, editing images in Photoshop, or any other tasks an average PC user may likely perform in a day.

Obviously, a midrange 1050 Ti-powered system isn’t expected to deliver butter smooth frame rates like its high-end GPU competitors, but if you’re considering the MSI 7REX, you should be content with the resolutions it delivers. It is possible to use the 1050 Ti card to power a VR headset like the Oculus Rift, but its advisable that you probably don’t. Both Oculus and HTC have a basic recommendation of a GTX 1060 GPU or better.

It averages 47fps on Valley frame rate tests, 67 fps on Titanfall 2 and 60.3 fps on GTA V, all played at full HD (1080p) settings. This level of performance would be great for a general-use laptop, but for a system billed as a dedicated gaming laptop, it’s a smidge disappointing. Plus, it doesn’t support VR gaming. Its closes rival, the Acer Predator Helios 300 uses a GTX 1060 GPU, is VR-ready and manages smooth playability on most AAA games: Titanfall 2 (96 fps) and 60.3 fps on GTA V (90.3 fps).

Finally, the 7RDX-1408’s battery lasted 3 hours, 42 minutes, on rundown tests, which is expected of a gaming laptop. This is way lower than even a desktop replacement, but we have a few scoring well including the Dell Inspiron 15 – 11 hours 06 minutes; Razer Blade (early 2017) – 10 hours 29 minutes; and, Acer Predator 15 that will last 5 hours 36 minutes. As always, this ilk of gaming notebooks are just portable enough to allow you move in a pinch to your next destination, but they aren’t designed for use all-the-way 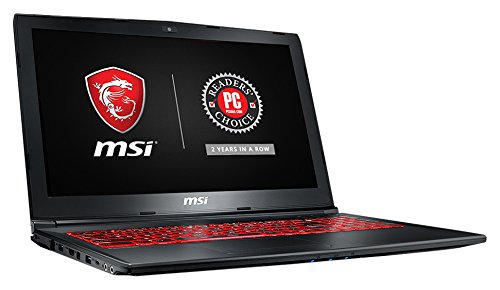 Like the new class of mainstream counterparts, gaming laptops come in various sizes and flavors. The MSI GL62M 7REX affirms the new concept, among others, that you don’t have to stick with bulky black boxes with insane accents that would be absurd if you bring them into a professional setting, in order to enjoy your games. On the other hand, while the design looks future-driven, this system will mostly appeal to folks who want a laptop that can’t be mistaken for anything than gaming.

But in the same category are machines with better gaming performance like the Acer Predator Helios 300, which means that the MSI GL62M 7REX-1896US offers a superb display, size, weight and, of course, pricing. Those are serious considerations, especially if you’re always on the move and need to play games away from your desk, for that, you can consider it in your list.