The MSI GS65 Stealth-483 is one of the best gaming laptops you can buy today. For the price, it packs a solid feature set, sleek design and performance that outclasses most competitors in design and style.

With the MSI GS65 Stealth-483, you’re getting an elevated gaming laptop, that offers the absolute best of technology that MSI can afford. The result is a sleek, portable 15-inch laptop that’s fitted in a 14-inch profile that sees you through high-end gaming as well as intensive productivity work without breaking your piggy bank.

Previous iterations of the MSI GS65 Stealth brought immense power in understated, yet attractive packages unlike bald competing gaming laptops. With the new Stealth, we like it so much that we’ve also named it among the best MSI gaming laptops of 2020.

If you’re looking for the ultimate gamer and crowd pleaser, you’ve just found it in the MSI GS65 Stealth-483 – and can be had for cheaper than key competitors.

The laptop feels premium and very light, weighing just 4.19 pounds and a meager 0.69 (17.33mm) thin, against the Asus ROG Zephyrus GX501’s 4.97 pounds and 0.7 inches –it has held the bulb for thin-and-lightweight gaming laptops until the MSI Thin–051 happened. It will slide easily into any backpack and won’t weigh you down, which is impressive considering that it’s a device meant for daily commute.

The GS65 Stealth is available in many configurations, all bearing the same resolution but some with a GTX 1070 and differing amounts of RAM and storage. For anyone out here looking for an ultra-thin gaming laptop, the Series offers some degree of choice to match your needs, but it’s not anything close to fully customizable. Our review model, the GS65 Stealth-483 is outfitted with a full HD (1920 x 1080) 240Hz screen, 16GB RAM, RTX 2060 GPU and 512GB SSD NVMe storage.

The major boost on the GS65 Stealth-483’s performance is the Intel “ products formerly Coffee Lake” processor, in this case the six-core Intel Core i7-8750H (2.6 GHz-4.5GHz). This is an 9th generation processor that gets better scores than its “Kaby Lake R” predecessor with the addition of two more cores, whose benefit mainly shows on strenuous multicore tasks like media projects or epic gaming sessions. With two extra cores in tow, it will churn out massive spreadsheets and render video files without lagging.

This is possible considering that Far Cry 5 is DirectX 11-based, while Rise of the Tomb Raider can be fired to DX12, which is essentially what a benchmark does. Tested at 1080p, the MSI GS65 Stealth-483 delivers 98 fps in Normal settings, but the values drop to 84 fps in Ultra settings; and Rise of the Tomb Raider garners 119 fps in Medium settings and 93 fps in Very High settings. Both scores are slightly better than what you get on the Acer Predator Helios 300 (2021) fitted with Nvidia’s RTX 3060 graphics card.

Simply put, the extra cost of the RTX 2060 doesn’t pan out, especially when stacked against GTX 1660 Ti-based systems. That’s is partly due to the fact that the RTX 2060 can’t make great use of ray-tracing, like you would with high-end RTX 2070 and RTX 2080 variants. As such, since the performance is about equal to the non-RTX cards, the added cost isn’t really worthwhile. Regardless of how it fares head to head, if you have your eye on this laptop, in a larger sense, this performance is solid.

If you’re looking for a gaming laptop for the first time, you might not be aware that almost none of these devices bring along decent battery life. But, the GS65 breaks the paradigm, and so do other thin and light models including the Zephyrus and Alienware 15.

It now brings decent battery life to a category where even four hours is a rarity, and goes ahead to promise up to eight hours on a single charge. This is far better than, say, 90% gaming laptops out here, but there’s still room to grow.

The MSI GS65 is an impressive midrange gaming laptop that we’ve reviewed to date. The laptop meets or outclasses its most performant rivals and easily trounces most of them all in terms of design and style. That said, we wish for a few more, like better native audio, and the laptop tends to get a little hotter than we’d like on our laps while under load.

All told, we appreciate the niceties offered for the price, and small conceits for a laptop you can confidently both take into work and into your next gaming session. And for the price, the MSI GS65 Stealth-483 is one of the best gaming laptops you can buy today. 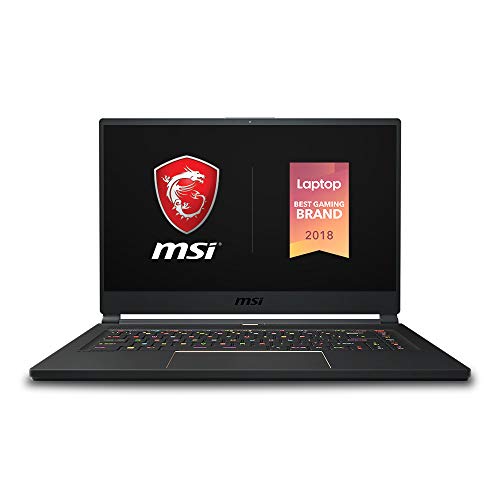