The MSI GV15 11SC-633 is about as cheap as gaming laptops get, and for the price, you get an affordable machine that’ll work as designed. It handles everyday esports and has the processing power for basic computing.

With the MSI GV15 11SC-633, it seems like MSI is finally taking on the budget laptop category with some affordable builds while packing the absolute best of technology without sacrificing too much in way of performance. The result is a nice-looking 15-inch laptop that sees you through 1080p gaming as well as mid-complex productivity without breaking the piggy bank.

The MSI G15 gaming laptop brings just enough power in an understated yet nice-looking package unlike before when a budget gaming laptop meant an ugly-looking behemoth with blinking gaming power. Under the hood, it packs an 11th gen intel Core i5-11400H CPU, a GTX 1650 GPU, 8GB RAM, and 256GB SSD storage; just enough power to run modern titles at 1080p and productivity tasks on the side.

Both of these alternatives offer incrementally better gaming performance, but you also get to spend more for the same. In that case, for anyone shopping on a tight budget, the MSI GV15 11SC-633 looks like a perfect choice that deserves a top spot on your shopping list.

With its 1.6-inch screen and fairly small bezels, the MSI GV15 11SC-633looks like most other MSI gaming laptops. Sure, the keyboard backlighting is fixed red, but pretty everything else you’d expect from a gaming laptop is present, and MSI didn’t try to cut too many corners here.

The chassis is mostly plastic with a machined metal backing to the screen, but generally, it feels sturdier than I expected at this price point, and the lack of a full-metal body means it’s more lightweight than other gaming laptops in its class. It weighs 4.63 pounds and measures 18.5 x 3.5 x13 inches, making it portable enough for daily commutes, but it’s still heavier than the latest crop of gaming ultraportables, including the Asus Zephyrus 14 or the Razer Blade 14.

The keyboard here is pretty standard, but the keys have decent travel and don’t feel spongy; meaning, it’s comfortable to use for either gaming or typing. The plastic frame obviously means the laptop gets some flex at the center of the keyboard when pressed firmly, but you’re likely not going to notice this during regular use. The trackpad is nice and responsive, but with the amount of space below the keyboard, I wish it were a little bigger.

Given the asking price, I can say the screen is pretty impressive: MSI offers a 1080p IPS-level panel with good maximum brightness and good color reproduction. While the blacks aren’t particularly sharp as seen on more expensive laptops like the Alienware m15 R7, the overall sharpness is fantastic. Our review unit comes with a 144Hz refresh rate, making it great for esports, backed by the Nvidia GeForce GTX 1650 Max-Q GPU.

Finally, it gets a decent range of ports, including three USB 3.2 Gen 1, one USB Type-C, Ethernet, and a headphone/mic combo. It also gets a 720p webcam that’s acceptable, plus speakers and a mic that are viable options for video calls, fitting the dual purpose of a laptop meant for both work and play.

The Nvidia GeForce 1650 graphics card inside the MSI GV15 isn’t going to win any accolades at any resolution above 1080p, but it’s not trying to. If you’re happy with frame rates that hover above 50, you can play most games at 1080p with your graphics settings set to High, which is great.

If you’re willing to drop your settings a bit, hitting 60 frames per second shouldn’t be a challenge in most titles. In Hitman 3 (High, 1920 x 1080) you can get around 64fps, but in ultra settings, it drops to 58fps. The game still looks great, too, thanks to the bright colors of the 11SC-633 display. Ray tracing isn’t available in the lower-end GTX cards, so don’t get your hopes up there.

CPU performance is generally decent here; the 11th-gen Intel Core i5-11400H does crumble in comparison to its 12th-generation counterparts, but you won’t find any glaring issues with how the CPU handles tasks. Performance n CPU-dependent games like Total War strategy series is great. Given the price tag, the MSI 11SC-633 thoroughly impresses with its overall gaming performance.

Thermal control is solid, too. The fans are fairly silent when idling and while they do ramp up slightly during games or resource-intensive workloads, they’re not as loud as some budget gaming laptops I’ve seen. Still, the MSI GV15 remains nice and cool while idling, but the chassis gets a little warm when gaming. Core component temperatures remain within range, but you can get a laptop cooler if you find it going overboard.

One potential bottleneck on this MSI gaming laptop is the RAM. Our review model features only 8GB RAM and 256GB SSD, certain tasks have potential for slowdown; nothing too egregious, but in case you’ll be running memory-sipping software or trying to open 20+ Chrome tabs at once, it might get a little sluggish. Fortunately. Both the memory and storage are upgradeable, so if this is a huge issue for you, there’s the option to slot in some new RAM.

The MSI GV15 11SC-633 packs a 52.4Whr battery which offers a little more power than previous models, but it’s still far from all day. The fairly thin chassis means there simply isn’t enough room for a larger battery, and while you might expect the lower-end hardware to draw less power, the MSI GV15 can’t manage more than 5 hours of use with brightness at 50% brightness.

That’s not terrible, but it isn’t impressive either. Lasting around four to five hours over general tasks like web browsing is fine, but the MSI 11SC-633 won’t last over two hours in most games even in power-efficiency mode. It also takes longer to charge to full than most laptops, but that shouldn’t be a problem if you’re the ‘overnight’ kind of user. Basically, like most other gaming laptops, it’s designed to be used for gaming while plugged into a wall outlet.

The MSI GV15 11SC-633 is about as cheap as gaming laptops get, and for the price, you get an affordable machine that’ll work as designed. It handles everyday esports and has the processing power for basic computing. The keyboard is decent, and the MSI GV15 is slimmer and lighter than most competitors.

The MSI GV15 11SC-633 is fairly slim, light, and handles modest gaming – and it’s quite cheap. It’ll do the job if you’re looking for a budget notebook for both work and play without going far from a power outlet. But if you can afford more, you can do better. 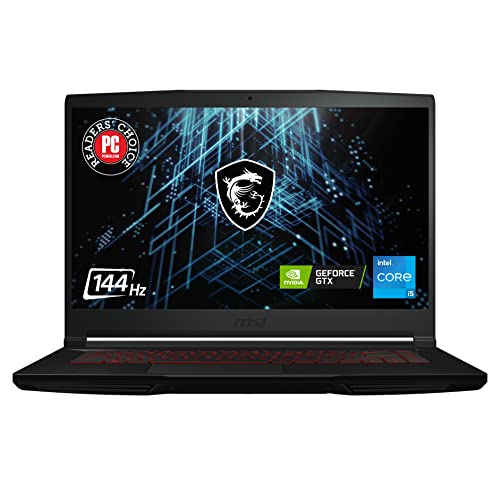