The Optoma UHD38 is a solid 4K HDR home cinema projector that’s seriously good for gaming, thanks to an ‘Enhanced Gaming Mode’ and 4,000 ANSI lumens that deliver lots of brightness, contrast, and vivid colour than ever.

The Optoma UHD38 is a low-cost 4K projector that’s ideal for all-around use in the home, and it has extra-special features that will satisfy gamers. With 4,000 ANSI Lumens, the UHD38 doesn’t struggle to churn out super-bright images, meaning you use it during the day – alternatively, you can use it as an outdoor projector, provided you have a good surface or screen to project onto.

However, the real thriller comes with the projector’s ‘Enhanced Gaming Mode’ that shortens input lag, making for 16.7ms response time for console and PC games played at 4K/60Hz, and offers an even faster 8.9ms at 1080p/120Hz if you don’t mind a drop I visual detail.

Sure, you’ll likely find faster specs on LCD monitors, but not many projectors or TVs deliver such detail unless you’re investing in the really high-end models. However, what the UHD38 offers that you can’t get in smaller monitors is immersive, super-sized images that are crisp, with vibrant HDR color and widely excellent contrast. To that, it adds a 32:9 ultrawide aspect ratio, which some games now support.

About the Optoma UHD38 Projector

The Optoma UHD38 Projector is a refreshed upgrade to the Optoma UHD30, now offered in a very capable all-round package, but it may not be for everyone. Reason? That would mostly be its long-throw lens. Unlike the Optoma Cinemax P2 Ultra Short-Throw projector, the UHD38 is capable of creating a 300-inch image, which is great if you have enough room in your living room and a wall to support that super-sized gaming span. Just keep in mind, that this long-throw lens does make the minimum image be somewhere around 100-inches when the UHD38 is placed about 3m away.

Well, this compact DLP projector isn’t going to be the most ideal plug-and-play projector for most homes, but if its super-sized, immersive, and vibrant images are what you’re looking after, then the Optoma UHD38 comes highly recommended.

The Optoma UHD38 is available worldwide, though the price tag varies depending on where you’re buying it from. It’s the flagship of Optoma’s two-strong DLP projector lineup for 2021 and as a successor to the Optoma UHD30 from 2020. The main difference between the UHD38 and the step-down Optoma UHD35 is brightness; 4,000 ANSI lumens, and 3,600 ANSI lumens, respectively.

The design of Optima’s projectors has evolved over the last generation or so, moving from the ribbed surfaces and open grills on the old Optoma UHD40 to cleaner lines, with better decorative vents and a few more curves. On the UHD38, all the onboard controls are on the top, while all the connections have been pushed to the rear.

There’s also a manual focus ring on the lens along with a zoom lever on the top, but it gets a rather tight amount of flexibility, offering a mere 1.1x of zoom at maximum range. With a 1.5:1 throw ratio, the Optoma UHD38 isn’t exactly what you’d call a short-throw projector, so you’ll need a bit of space to get the most out of it.

The UHD38’s most exciting feature is that it boasts more brightness than ever. At 4,000 ANSI lumens, this projector can work during the day and can push convincing images beyond 100-inches, if you have a screen or wall big enough.

The extra brightness comes with better lamp life: 4,000 hours in bright mode, 15,000 hours in dynamic, and 10,000 in eco mode, which is the same as the UHD30, which comes with 3,400 ANSI lumens. The UHD38 comes with a couple of built-in 10W speakers, which offer pretty decent quality given their small size.

The Optoma UHD38 offers everything you’d need in terms of connectivity, except for a DisplayPort input. For video, there’s the legacy VGA input alongside two HDMI 2.0 ports, both supporting 4K/60 or 1080p up to 120Hz. Sadly, there’s no Bluetooth audio as you get with some projectors, but it’s safe to assume most users will either have a full surround speaker setup or at least a soundbar, and you can easily get wireless headphone audio directly from your console or media device.

Optoma has finally crafted a projector that’s optimized for gaming, as it is fine-tuned for pretty everything else. As mentioned, the UHD38’s headline feature – Enhanced Gaming Mode – is fantastic with its lag-free fluidity but fails to peak with 4K. When playing a game that’s natively 4K/60Hz, the UHD38 delivers only a 16ms response time (still better than most TVs) and it doesn’t 4K/120Hz.

At 1080p/120Hz the UHD38 manages 8.9ms and at 1080p/240Hz a measly 4.2ms. These benchmarks apply to whatever presets you use, from Cinema through Gaming, Reference, and Bright. Well, a lot of these features are marketing details since most humans aren’t going to notice, and the fact that the UHD38 goes well below 40ms is impressive enough.

Most importantly, fast action sequences during games and movies look fluid enough, camera pans don’t attract any judders and there’s no trace of that old DLP horrible – ‘rainbow effect’. Overall, the UHD38 projector delivers a satisfying image whatever the source and resolution.

When displaying 4K on the projector, you’re assured of an image that’s just under 8.3 megapixels. Still, images remain crisp, superbly detailed, and finely immersive. Colours remain vibrant and well saturated from the projector’s eight-segment DLP colour wheel – which is enough to make colorful games pop – though we’ve seen both more impactful HDR and better black levels on some high-end projectors.

On the UHD38, a Gaming mode adds extra fidelity to games while movies on 4K Blu-ray look satisfying if watched in Cinema mode.

For all its great all-around image quality – save for average black levels – it is a great projector for the home. Still, it may not be the most flexible and the blame lies squarely with its long-throw lens, whose 1.5:1 throw ratio and paltry 1.1 zoom mean you’ll need a sizable room to project any image above 100 inches. However, if you have anything around 3m of distance from your wall, then this is a fantastic projector to invest in.

Should I buy the Optoma UHD38?

You want epic gaming day and night. Or, want to get the best from your next-gen console.

The UHD38 is a fantastic home cinema projector, with extra-special features for gaming, particularly the ‘Enhanced Gaming Mode’ that lessens input lag to 16.7ms response time, which is great for next-gen consoles. It will do 4K/60 on your PS5 or Xbox Series X, or 1080p/120 if you fancy high refresh rates over resolution, and will do that with less input lag.

And while you can find 4K TVs at the same price with better connectivity, better contrast, and stronger HDR, it’s just impossible to get such a massive screen for that much. What’s more, gaming on a projector doesn’t get more epic than this. With 4,000 ANSI Lumens brightness and long lamp life, the Optoma UHD38 is a solid home cinema projector that’s seriously good for gaming. It comes highly recommended. 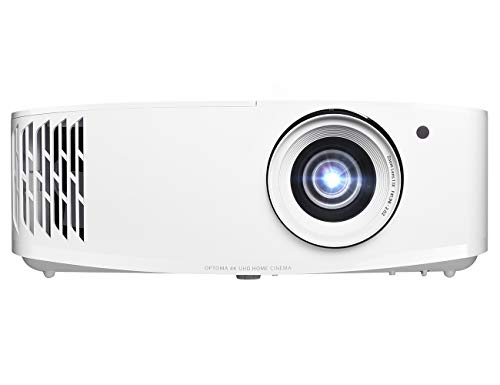