The Samsung C27F398 is a great monitor – for a very reasonable price. It packs a high-performance VA panel, a tighter 1,800mm radius curve that’s much better than most competing screens’ wider 2,400mm-radius curve.

Curved monitors are the latest trend in desktop computing, and while some offer minimal benefits at most, the Samsung C27F398 we’re reviewing offers incremental value for the buck. In doing so, it packs a high-performance VA panel, a tighter 1,800mm radius curve that’s much better than most competing screens’ wider 2,400mm-radius curve.

While at it, Samsung doesn’t do anything to improve the resolution over the ordinary 27-inch 1,920-by-1,080 curved monitor format. However, for the much you’re paying for this monitor its absolutely acceptable, provided it lives up to the brand’s usual image quality standard. And it does, giving a great centerpiece monitor for everyday use.

This Samsung 27 inch curved monitor is a budget offering, only that it gets a few premium features along the way. On a worktop, you’ll be looking at a glossy black front with a brushed matte black rear and a few classy bezels on the front. The bezels do a nice job concealing the panel’s borders, something that makes it look cool and classy. That’s just about where it all ends towards getting the looks of its high-tier siblings.

Build quality is middle-of-the-road, with a few tradeoffs that place it a few steps behind Samsung’s high-end monitors like the 32-inch Samsung Odyssey G7 or the MSI Optix gaming monitor. For one, the plastic build feels cheap than usual and the entire package feels excessively light and fragile.

A Y-shaped base props it onto a desk, and the orientation takes less desk space. Still, 27-inches isn’t small for any office desk, it provides ample space for multitasking despite the hinge type attachment being a clear weak link. The C27F398 only has tilt-only mechanism, an omission that most competitors correct with inclusion of at least height adjustment and sometimes pivot adjustment. 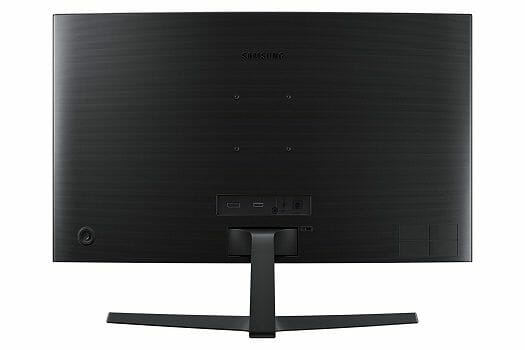 Connectivity on the Samsung LC27F398FWNXZA inch curved monitor is excellent –at least for a budget monitor. On the back panel, there is a DisplayPort and HDMI ports, instead of the legacy DVI or VGA, meaning the monitor is ready for modern systems. While it doesn’t get built-in speakers, it gets an OSD joystick feature that Samsung has been flaunting in its premium-class monitors to replace ageing buttons. The joystick also gives the system a cleaner look without sacrificing access to menu options.

Being a budget monitor, we didn’t expect all ergonomic adjustments and still have it at a low price, though. If all those adjustments are must haves, you can hook up the monitor to a VESA standard mount with a 75 x 75 bolt pattern for much less that you can spend if you opt for a monitor with all ergonomics.

Having a 1800R curve radius on a budget monitor is slightly aggressive, it seems like Samsung were not taking chances in topping some ultrawides that were already in the market. Images remain clear and not distorted to a larger degree.

If you’ll be using this Samsung curved monitor for movies or casual games, you’ll realize that the tighter curvature increases the monitor’s value over flat monitors. For instance, the display’s corners look much closer especially if you sit close enough making it fairly immersive, but you’re better off with a larger screen if a wider aspect ratio is a preference over everything else. Still, this monitor excels on most fronts that most budget display fail to impress, although it fails to meet our expectations of a VA panel.

For instance, it is only able to produce 97% of the sRGB color gamut volume with a struggling default accuracy of Delta 3.5. If you tweak the OSD and input a few calibrations, you can get a way with a few improvements of that can reduce the errors to Delta E .8, which is in the same ballpark with prosumer display units.

Gamma is slightly off at 2.1 (out of the box), but calibration and reducing the default brightness increases it to 2.2 for excellent tracking. On the other hand, the monitor excels in contrast, with a maximum 2900:1 output when you have the brightness settings correctly tuned. If you get it right, the display looks lush with improved grayscale performance and black luminance 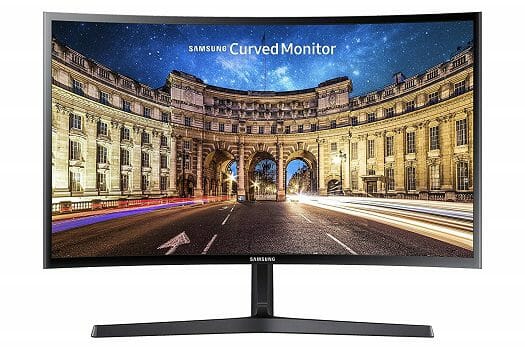 The display does look a bit brighter on the center when displaying a full black image but it’s a non-issue for most games and movies. As expected, a few tradeoffs had to be made to reach the low price but the Samsung C27F398 would use some improvements.

Also, for Vertical Aligned (VA) curved gaming monitors, slow pixel response times that translate to blurring are expected in fast-paced games or even on action movies. Luckily, the monitor already packs a three-stage Response Time setting which you can use to clear ghosting and smudging.

The Samsung 27 inch curved monitor is FreeSync certified with a functional range of 48Hz to 72Hz, but it has not been tested for G-Sync compatibility, a feature you get on high-end gaming monitors. As needed, you can increase the monitor’s refresh to 72Hz without overclocking, hence, adding to the monitor’s functionalities. All this can be done by activating FreeSync or setting a custom resolution in the Nvidia Control Panel.

The Samsung C27F398 has a 10ms lag, which is very responsible despite the monitor not having an extended refresh rate. A short input lag is perfect for competitive gaming, but you’re better with a 144Hz or 240Hz variant like the ASUS ROG Swift PG258Q if you’re after smooth playability.

The Samsung C27F398 offers great value for anyone buying a daily-use widescreen for the office or general use at home, and that includes gaming.

Of the monitors we’ve reviewed recently, the LG 27UD58-B is a close competitor with its 27-inch 4K VA panel. Its color accuracy is much better as compared to the Samsung C27F398, only that it doesn’t have either that all-important curve or is it anywhere near as affordable.

However, it gets you a high resolution and short input lag with excellent color quality, which isn’t something to be sniffed at.

But if curves are your thing and you don’t have the money to spend on a high-end monitor with a higher resolution that can be used for gaming and the likes, then the Samsung LC27F398FWNXZA is a worthwhile upgrade.