The Samsung CRG9 (LC49RG90SSNXZA) is an ultra-ultrawide 49-inch curved monitor with a 5120 x 1440 resolution and uses quantum dot technology to create a luxuriant workspace.

A few days before CES 2019, Samsung gave an early start with a range of new monitors, including the Samsung CRG9 (LC49RG90SSNXZA), an upgrade to the company’s massive 49-inch professional/gaming monitor, that offers an even higher resolution and slick design.

It’s a super ultrawide monitor, with screen curvature that’s designed to fill your entire field of view with its brilliant VA panel. For gamers, this one here supports great gaming features, making it one of the big-screen monitors that score well for productivity purposes and a truly immersive gaming experience too.

It starts at a price lower than widescreen competitors like Philips’ Brilliance 499P9H monitor and Dell’s UltraSharp U4919DW curved monitor. Did Samsung cut any corners to deliver an ultrawide monitor with great visuals at such a price?

While the image quality is paramount, it’s important to consider the overall look, feel, and customization of the frame the monitor is attached to. The Samsung CRG9 offers a good-looking solution in this regard, with a footprint and design that’s not very different from other 49-inch monitors in the market.

This ultrawide monitor comes with a stand that, although not very slim, is nearly as large as the monitor itself. As a result, it gives the frame some minor tilt and swivel control. Being a curved display, you’re most likely going to want to sit right in front of it if you can, to fully enjoy the immersive wraparound effect.

In any super ultrawide monitor, there’s always an aspect of them being unstable, due to their size, but the Samsung CRG9 proves a steady hand. It is supported by an articulated armature clad in brushed silver color that spouts from the backside of the base. The arm does a good job holding the monitor and accounts for the Samsung LC49RG90SSNXZA’s impressive adjustability.

Every other monitor is adjustable in some way or another, usually a little up and down with a slight tilt to the forward or back — and the larger but less flexible Samsung 49-inch monitor is an example. The monitor offers decent ergonomic adjustments, including swivel, tilt, and height. Again, with these adjustments, this monitor manages to improve on a simple aspect of the user experience that is usually ignored by competitors.

The basic configuration is handled with a set of familiar on-screen menus, that are easily navigable and responsive. The menus themselves are clear, concise, and surprisingly robust. Here, you get lots of options. You can adjust the screen brightness, contrast, and individual color levels also configure which version of HDMI or DisplayPort you want the monitor to be running (1.4 or 2.0) on each of the input ports.

We can’t discuss this Samsung ultra-wide monitor without mentioning its overwhelming size. You’re getting a really big monitor. With a 48.8-inch diagonal wingspan, as well as 5120 x 1440 resolution, this monitor has a comfortable 600cd/m2 brightness level, that peaks at 1000cd/m2. The deep 1800R curve makes the already impressive presence of the monitor even more appealing. Just placing it on your desk transforms your workstation into a futuristic command center.

The screen looks clear, color reproduction is vibrant, and the 4ms response rate makes it even more robust. Of course, 1440p resolutions are easy to find at this price point, but this one is on a different level, but slightly below 4K. The Samsung CRG9 is a dual QHD monitor, meaning its 27-inch 2560 x 1440 monitors fused into one, brilliant gaming display.

The Samsung LC49RG90SSNXZA monitor is not 2K or 4K…just in between, maybe 3.7K if you do the calculations. Finding content that easily fits into this resolution is never easy, but most games easily leverage the appropriate aspect ratio and ample screen space. Games like Fortnite and The Witcher 3: Wild Hunt support its odd dimensions with ease, but streaming services like Netflix, HBO Now, and Amazon Video have trouble scaling content without losing quality.

HBO Now, in fact, gets the most trouble scaling to the Samsung LC49RG90SSNXZA’s enormous yet unusual size, with a zoom on one corner of the video and chops off the rest. You’ll have better luck if you simply hook up a game console or download your favorite streaming service’s official app instead of streaming from your browser.

This isn’t the monitor’s fault, and it’s a common symptom you’re going to see on any monitor with a resolution a little outside the norm. The Samsung LC49RG90SSNXZA will suffer the same fate. If you’re in doubt, it’s best to simply use 4K content on these monitors — browsers and streaming services do a better job in scaling down content than they are at scaling up.

The Samsung CRG9 specifications alone look impressive, but the monitor has another trick up its sleeve: A technology called quantum dot, that has been around for a while and works by filling the screen with nanocrystal semiconductors. This tech delivers unparalleled color depth, better contrast ratios, and all sorts of impressive stimuli for your retinas.

From edge-to-edge, this monitor delivers rich, velvety colors. Gameplay is enhanced by AMD Radeon FreeSync2, a sweet 4ms response time and 120Hz refresh rate, in addition to quantum dot technology and HDR 1000 that accelerates delivery of realistic color and better contrast. The latest gaming desktops, especially those using Nvidia’s RTX 20 Series graphics cards (RTX 2070, 2080, 2080 Ti, etc.) will have a field day here. Even at the very high settings, motion is fluid, colors don’t bleed, and they are precisely where they need to be.

It’s easy to see why — right out of the box, the LC49RG90SSNXZ sports an impressive 3000:1 contrast ratio, 32:9 aspect ratio and it displays 125 percent on the sRGB spectrum and covers 95 percent DCI-P3 and supports 1.07 billion colors.

How does that impact practical use? It means you’re getting a monitor that looks great, without tweaking a single setting. All you do is pull it out of the box, plant it on a desk, connect to the mains, and you’re done. You no longer have to mess around with the default settings to get the most out of this monitor — it’s bold, it doesn’t need any coaxing.

How did Samsung do it? Well, that excellent contrast ratio is a result of that quantum dot, which impressively handles color much more efficiently than your standard LCD. In tech terms, they’re molecular-sized prisms that bend light to different colors ‘frequencies’ depending on their size. As a result, these nanocrystal semiconductors act as a filter between the LCD’s backlight and the display, which ensures that colors go where they need to when they need to, and not anywhere else.

The use of quantum dot managers to push the Samsung CRG9 ahead of the lean competition in the 49-inch gaming category, without inflating the price tag. Even five years down the road, the Samsung C49RG9’s quantum dot make its colors sharper, more vibrant, and much more accurate. And, you might get even better scores with some little calibration.

The Samsung CRG9 is an ultra-ultrawide 49-inch curved monitor with a 5120 x 1440 resolution and uses quantum dot technology to create a luxuriant workspace. Its design supplants typical two-monitor setups, and they both look immersive either way. As always with extra-wide monitors, size and scope often compensate for any shortcomings, and its price makes it an excellent pick for gamers and business professionals working long hours.

Simply put? No, there isn’t a better alternative. The Samsung CRG9 sits comfortably in the premier zone when it comes to price, performance and image quality.

There’s the Philips Brilliance 499P9H, if you need a USB-C dock, a pop-up webcam and built-in speakers, but you’ll lose out on that deep Samsung curve and the rich contrast provided by the CRG9 quantum dot display.

Similarly, you could pick up the ViewSonic ColorPro VP3881, a 38-inch IPS monitor, which offers an immersive gaming and professional experience in a massive panel, but on a smaller screen and a few dollars less the CRG9’s price. 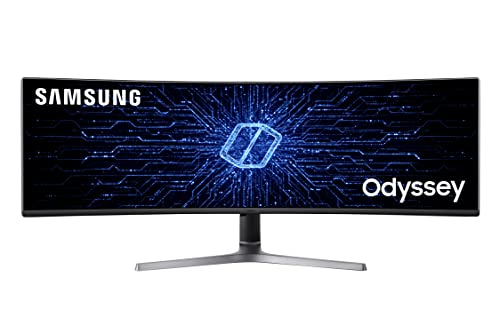 Yes, you should. It’s expensive for a monitor, but cheaper than other 49-inch offerings. And, for what you get, it’s a good deal. The Samsung LC49RG90SSNXZA will definitely outlast your current gaming rig, and if you’re buying for a general use, it will last longer — as an office workspace, 32:9 is cutting edge, if not an overkill.

So far, the company has outdone themselves with a 49 inch monitor – Samsung CRG9 (LC49RG90SSNXZA), and with a below the competition retail price, this is one monitor you’ll hardly pass up.