The Samsung Q70T QLED TV (QN55Q70TAFXZA) lives up to the company’s strategy: make cheaper sets, but cut some corners to do so and hopefully the savings make up for lower performance. Its lowest offering was seen in the Samsung Q60T QLED TV, that suffered from this approach.

As an upgrade, the Q70T, finds a better balance, though it faces stiff competition from cheaper models, including the TCL 6-Series and Sony’s X900H Series.

The most significant change in the new QN55Q70TAFXZA we’re reviewing is the price; it costs less that the same 55-inch Q70R, but still costs more than the TCL 6-Series Roku TV (R635). The only tradeoff for that price cut is the shift from dual LED backlight to the full array backlight on last year’s Q70R.

Also, its sound is weaker, but unlike the Q60T, Samsung didn’t downgrade the processor on the Q70T, which helps to keep the overall picture pretty high.

Across all these models, the Samsung Q70T QLED is almost identical, offering the same number of ports, the same 4K resolution, 4K resolution and HDR support on the same QLED display. In fact, they use a dual backlight and run the same processor.

Therefore, we expect almost similar performance on all sizes, as well as same strengths and weaknesses as the 55-inch model we used in this review.

Samsung design simple, yet elegant QLED TVs, and the Q70T is no exception. The 48.4 x 9.6 x 30.9-inch unit doesn’t take up lots of space on a TV stand and it doesn’t look imposing when hanged on a wall. It has thin bezels around the QLED screen and the dark grey plastic enclosure looks great, not like the cheap fragile enclosures we see around.

In case you don’t fancy having your TV hang on a wall, the Q70T comes with boomerang-style feet that clip easily and securely into the bottom of the unit. If you need to prop it, you can use a standard 400 x 400-millimeter VESA mount or Samsung’s mini wall mount, a handy accessory when you want to minimize how far your TV is separated from the wall.

Port options are excellent: four HDMI ports, including one with eARC support and one that supports HDMI 2.1, that’s available on Xbox Series X and PlayStation5. In addition, it has an RF antenna input, but it doesn’t support legacy technologies like composite video. If you don’t mind wired, you can connect a soundbar via optical digital audio and it also has Bluetooth for connecting headphones wirelessly.

Our review unit, the Samsung Q70T QN55Q70TAFXZA delivers a sharp picture with vivid colors overalls. You’ll be impressed by the crisp detail when watching moves – like while watching Avengers War on 4K Blu-ray, the lighting from Thor’s fingertips is ever noticeable than you’ve seen before. Similarly, the gigantic breaking waves and underwater scenes in My Octopus Teacher come through in excellent detail.

The Q70T produces deep blacks and its contrasted colors are simply impressive. All these can be attributed to HDR10+ support (but not Dolby Vision), that helps it produces vibrant hues. The Samsung QN55Q70TAFXZA maintains good color consistency from various angles, something the less premium Samsung Q60T can’t manage, although you’d notice some negligible dimming at the edges.

For gamers, the Q70T handles action scenes pretty well; like the battle in Wakanda in Infinity War, without loss of pixels or blurring. During gameplay on Xbox One S, the panel switches to game mode and handles the race at 200 MPH in Forza Horizons as well, but the background isn’t that crisp. Similarly, when playing Call of Duty the focus of the action was sharp but the background isn’t.

Like all other Samsung QLEDs, the QN55Q70TAFXZA runs the same Tizen platform. It comes with large variety of apps – Netflix, Prime Video, Hulu and Apple TV that come pre-installed. Setting up the TV is simple through on-screen prompts, or you can download the SmartThings app to make everything easier. Either way, you’ll need to create a SmartThings account to use all the available features.

Another area where the Q70T excels over its predecessor is its voice assistant options, whereby it includes Samsung’s Bixby, Amazon Alexa and Google Assistant as options, where the older model only had Bixby.

The remote remains unchanged – Samsung’s standard wand-style remote, which is comfortable at hand and gives easy access to tings you’ll want to do most, like adjust the volume and get to the home screen. You also have a play/pause button, channel changer, microphone for the voice assistant and a shortcut to Ambient Mode. 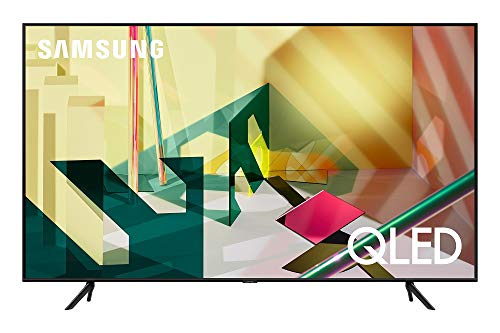 The Samsung Q70T QLED TV is an excellent QLED with vivid colors and great black levels. Like its siblings in the Q70T range, the 55-inch model that we’ve reviewed produces crisp 4K images, is bright enough to watch during the day and is a great choice for gamers who need a fast set. And, it costs much less than the 2019 model, meaning it should be a great choice if you’re shopping for a midrange QLED TV.

But the competition can’t be just ignored. TCL have the 6-Series Roku TV (R635) that’s much cheaper and delivers better color accuracy and very short lag time. It remains our top pick in this price range. But big brand names sometimes matter, and if you’re after the looks of Samsung and want the singular cachet of brand, the Samsung Q70T QLED TV (QN55Q70TAFXZA) is a fairly affordable set that will meet most of your needs.