Samsung’s QLED TVs are big, beautiful and expensive LED-backlit LCDs paced with the best performance-enhancing technology the company has access to offer. We’re always skeptical of just how good a picture your eyes can sip out of an LCD compared with the thrilling color range, perfect contrast levels, and perfect OLEDs like the LG E8P can offer. The Q6FN line sits at the bottom of the QLED series, and at the 55-inch Samsung QN55Q6F model we are reviewing, it’s comparable with the Sony XBR55X900F in price and features.

The 4K resolution panel boasts excellent HDR support and a 120Hz refresh rate, and not to mention some of the latest features to appear in smart TVs, including Bixby voice technology and built in content discovery that pairs live TV and streaming options in a better way than ever before. But even with a premium design, Samsung has reserved some of the best features for more expensive models like the Q9F series, leaving the Q6F series with more pedestrian touches. For instance, in the Q6F series you’ll have to do with a less advanced version of QLED technology and edge-lit technology.

In spite of all this, the less expensive Samsung QN55Q6F manages to offer strong performance, fully utilizing its display and adding great audio, to deliver an updated smart-TV experience and a stellar design.

The Samsung Q6F marks the return of Samsung’s QLED premium TVs, with the base model boasting some of the Q Series’ most distinctive features. Top in the line is something Samsung call 360-degree design –referring to good looks from any angle, and it doesn’t necessarily refer to the viewing angles alone. While most televisions have un-appealing back panels, the QN55Q6F’s design looks good both front and back.

Samsung understands a thing or two, that a TV can be placed in the middle of the room, so they designed a back panel that’s easy on the eyes too. The back panel has a textured back plastic surface, with ribbed angles running horizontally. There is a metal trim on the edges of the panel, but it doesn’t overlap the glass panel, and if you look keenly you can see the glass layer covering the display panel.

Even with the looks that might convince you to place it on a table in the middle of your living room, it can still be affixed to a wall or other stand with a 400 x 400-millimeter VESA mount. The set measures 48.3 x 9.8 x 30.7 inches and weighs 39 pounds. If you decide to have it on a table, the included feet with a silver finish latch easily even without a screw, and includes built-in cable routing for a clutter free assembly. 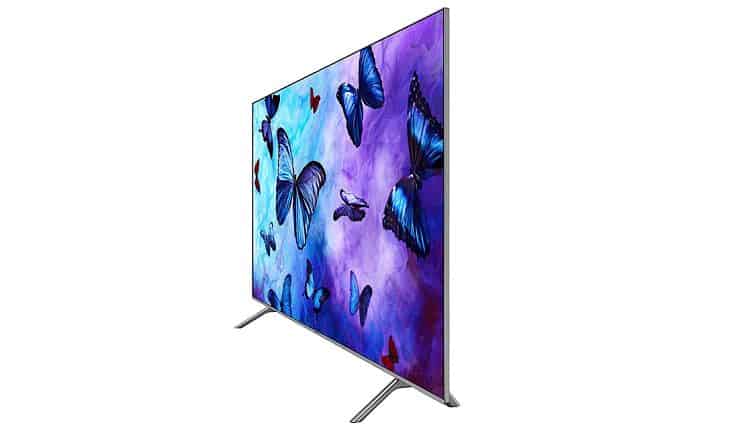 All ports are located on the back of the TV, set on a connector panel on the right-hand side. It is a recessed panel that’s 11-inches from the right-hand edge, which is a little less accessible but the port selection is unmatched. Whereas the Samsung Q7F uses a separate Connector Box and a OneConnect cable, this one uses the same rear-mounted ports.

The separate AV panel is once again a reserve for the more expensive models. On the Samsung Q6F, there are four HDMI ports (one with ARC), two USB ports, a digital optical port for surround sound, an RF connector for the antenna and cable, and a LAN port in case you need to use wired networking. Wireless connectivity comes in way of built-in 802.11ac Wi-Fi. This TV comes with Samsung’s automatic device detection, meaning you can plug an Xbox One X and it will be detected and labeled according, as an Xbox complete with an Xbox logo on the menu ribbon.

The remote here is a tiny, slightly curved wand measuring 6.4 inches and just over 1.4 inches wide. It has a more pronounced circular navigation pad, flanked by power, number, voice, and color buttons on the top, and back, home, and play/pause buttons on the bottom. You don’t have physical numbers, rather a button that displays on-screen numbers (0 to 9) or colors (red, green, yellow and blue), just like you’d find on some home entertainment devices.

A pair of buttons sit below the buttons and are used for Volume and Channel options. Overall, it’s a minimalist, functional remote that is quite straightforward to use. Apart from controlling the TV, this remote is a universal controller for other home-entertainment products.

The Smart Hub platform powered by Samsung drives the TV’s connected features. It has gotten an upgrade with Bixby; the voice assistant Samsung is using in its flagship smartphones to compete with Siri and Alexa. As expected, the interface is clean, attractive and has plenty of useful features including voice search and a web browser. It also supports screen mirroring for supported PCs and mobile devices through WiDi and Miracast, that are being phased out in favor of Google Cast. For those who don’t have Samsung devices, you can use a Chromecast for screen sharing.

Samsung takes a good hit at Smart Hub app selection, but its tiny when compared to Roku TV, Amazon Fire TV, or Android TV. Still, it gives you access to major streaming services, including Amazon, Google Play Movies & TV, Hulu, Netflix, and Vudu. But it doesn’t include streaming sites like Sling TV or DirectTV Now, or even Crunchyroll or Twitch. Music options are plentiful, though, including Deezer, iHeartRadio, Pandora, SiriusXM, Spotify, and TuneIn.

The Samsung QN55Q6F has impressive specifications including a 120Hz refresh rate and quantum-dot technology that adds the Q in the QLED moniker. Still, viewing the Samsung Q6F is a mixed bag of impressive and mediocre. Overall, the performance is good across the board, it remains excellent in spite of some limitations – limitations that emerge from the base version of QLED offered on the Q6F, but surprisingly absent in the high-tier Q9F models, such as the 65-inch Samsung QN65Q9FN.

When watching the brightly hued BBC One’s Dynasties: Emperor Penguins, it was very clear that the Q6F reproduces excellent colors. Whether it was the colony of Emperor penguins in the Atka Bay swatting their flippers at each other, or the group of mothers trapped in a ravine during winter and unable to carry their chicks on slippery walls, the colors were vivid than ever. Color is fairly accurate on this set, putting it in the same category with high-end TVs like the Sony XBR-X900F and the less expensive 55-inch TCL 6 Series Roku TV.

As expected, Samsung delivers decent HDR support, for as long as you don’t care about Dolby Vision. On the QN65Q9FN basic HDR standards are supported –HDR10 and Hybrid Log Gamma (HLG) for live content. However, instead of using Dolby’s industry-leading option, Samsung opted for its in-house competing HDR10+. Content that comes in this proprietary format is not very common, with only Amazon streaming and 20th Century Fox’s Blu-ray discs offering HDR10+, but its still early to declare Dolby Vision a must have in TVs.

Nevertheless, HDR content looks impressive even with the set lacking localized dimming. Most movies you’ll be watching will render the kind of low you expect from an LCD panel. All these trickles down to brightness, where the QN65Q9FN shines with a superb 1,418 nits, which is better than the Sony X900F’s 1,278 nits and last year’s Samsung Q7F’s 1,006 nits, while the less expensive TCL 6 Series holds down with only 607 nits.

For most users, any TV whose price goes northwards of two grand must have excellent 4K as standard. While 4K performance isn’t the industry-mark for a decent TV set, Samsung does a good job in processing content delivered in 4K resolutions, with motion smoothing that makes for crisp details and no artifacts. You will be surprised at how well this set reproduces densely clustered details without the common screen pixilations ‘door-effects’, even when the images in question are of low quality. Fast action appears very smooth, with cars and fight scenes in movies coming out with minimal stuttering.

For gamers, the Q6F supports both 4K and HDR gaming out-of-the box. Interestingly, you don’t have to adjust or input specific adjustments to get into play. Here we are talking of support for 60 and 50Hz output and 10-bit color, even if most gaming monitors out here max at 144Hz for modern titles. Modern games like Assassin’s Creed: Origins are rendered well with the Egyptian environments popping with bright and vibrant colors.

The Samsung 55Q6FN’s twin 40-watt speakers have a built-in subwoofer for extra bass. When watching a movie or a YouTube stream, intense conversations and whispered dialogues are audible and easy to hear, and loud noises such as gunshots are very clear than most subwoofers can produce.  Should you want more, a sound bar will increase the audio volume or Dolby’s Atmos support, but it still remains one of the few TVs that excel in clear, quality sound output.

The Samsung Q6F also has a fair share of its flaws. First, its viewing angles are a bit discouraging with noticeable color shifting when viewed even from 45 degrees off axis. Also, backlighting isn’t quite uniform especially when you begin to notice shadows in the corners of the screen. These kinds of imperfections are clearer when using test images, but the clear eye never realizes such flaws.

While at that, we expected to see Samsung’s new and improved QLED technology at full display here, with the full-array backlighting and advanced filtering tech as exhibited during the CES and Samsung’s launch even last march. It is unfortunate that the Q6F gets a bit of the tech, while still being a QLED display with quantum-dot technology. It lacks Samsung’s OLED-like black levels nor does it have a full-array backlight, both features have been reserved for the company’s top models, like the Q8 and Q9.

The Samsung QN55Q6F is the company’s base flagship TV, and rightly so. While it can’t reach the contrast extremes of OLEDs and skimps on high-end QLED features, it still shows the widest color range we’ve seen yet, and very strong color reproduction for an entry-level edge-lit LCD TV. In fact, it showcases many things Samsung has done in its latest smart-TV range, especially the excellent audio and elegant design.

It gets a few flaws that are profoundly hard to fix hardware elements such as edge-lit LCD panel or the hard to reach ports. None of these are deal-breakers, but for an excellent Q6F QLED TV, they do keep it from being the best. If you prize color range and near-perfection in your TV of choice, OLEDs have matured a bit more, thus you can consider the likes of the LG OLED65E8PUA, the Sony XBR-X900F or the Samsung QN65Q9FN, but be prepared to spend slightly more. But if you’re in the market for a 4K set at a good price, that blends strong performance with an elegant design, the Samsung QN55Q6FNAVXZA is easily a best buy. 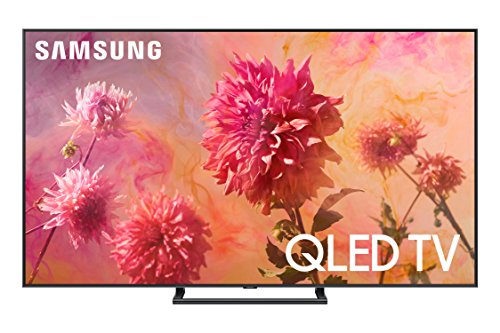