The Samsung QN65Q60RAFXZA QLED TV is a showcase of many great things, from Samsung’s impressive smart-TV platform to its robust gaming capabilities and elegant design

The Samsung QN65Q60RAFXZA (popularly known as ‘Samsung Q60’) might easily be the most affordable version of Samsung’s QLED lineup – a series of highly optimized LCD displays built to compete with more expensive OLEDs – and that’s worth getting excited about. If you’re in the market for a well-made smart TV that blends superb performance with an elegant design, the Q60 is certainly worth considering as one of the best TVs out there.

Our review panel boasts 4K resolution, solid HDR 10+ support and a 240Hz refresh rate, with voice assistant technology built in and content discovery that pairs live TV and streaming options better than before.

Among Samsung’s QLED TVs, the models in the Q range have high points, especially the Samsung Q90 QLED, which earns a top spot as one of the best TVs of 2019 with excellent performance to match its premium price. On the other side of the spectrum sits the Q60 we’re reviewing, which costs roughly half the price of the q90. The cheaper version picks the same stylish design, the same quantum-dot enhancement and a similar smart-TV experience, and goes even down to the charm of the Bixby voice assistant.

When placed on a shelf alone, the allure of Samsung’s design philosophy shines. We’re talking of Samsung’s signature ribbon texture that covers the back panel, making the near-black plastic look more stylish and feel premium, compared to the plain black plastic used on many more-affordable TVs.

The black plastic build is more basic than the metal-trimmed design on the expensive Q90 model – or even the less costly Samsung Q6F (2018), the Q60’s predecessor. But the bezels on the QN65Q60RAFXZA have a subtle brushed finish that’s better than the plain matte finishes used on other sets in this price range.

The stand is also different; instead of a C-shaped center stand with a single foot and a large square footprint, the Q60 gets two boomerang-shaped feet on either end of the TV. With this design, the set looks simple in both looks and assembly, much better than the single-piece, C-shaped pedestal stand of the Q90 QLED.  It’s also more minimalist than what you find on the older Q6F QLED, but the overall effect is the same: a sturdy base for the TV that can be easily assembled.

Measuring 57.3 x 32.9.1 x 2.3 inches without the stand, the Samsung QN65Q60RAFXZA is fairly slim for an LED TV, although it may look a bit chunkier since Samsung’s design tends to use fairly uniform cabinet thickness. It weighs 58.2 pounds and the set is designed to be either placed on a table or hung on the wall using a 400 x 400-millimeter VESA mount. 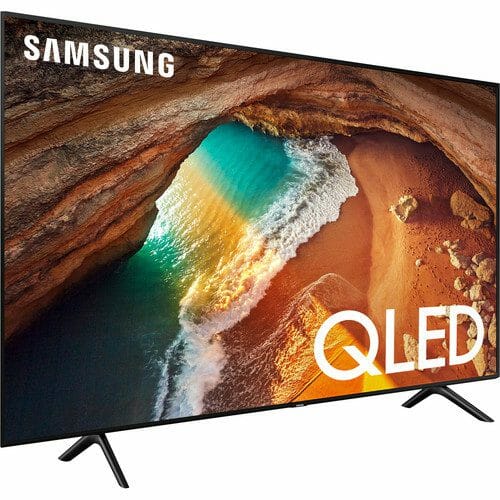 All ports are set on a rear-facing recessed panel, and they include: Four HDMI ports, two USB ports, an Ethernet port and an RF connector for attaching the antenna. One of the HDMI ports also supports audio return channel (ARC) for seamless one-cable connection to a soundbar.

Unlike the expensive Q90 with a separate box of ports, the ports here may be difficult to access especially when you hang it on a wall. For wireless connectivity, the Samsung Q60 has both 802.11ac Wi-Fi built in and Bluetooth.

The remote here is a tiny, slightly curved wand measuring 6.4 inches and just over 1.4 inches wide. It has a more pronounced circular navigation pad, flanked by power, number, voice, and color buttons on the top, and back, home, and play/pause buttons on the bottom. You don’t have physical numbers, rather a button that displays on-screen numbers (0 to 9) or colors (red, green, yellow and blue), just like you’d find on some home entertainment devices.

A pair of buttons sit below the buttons and are used for Volume and Channel options. Overall, it’s a minimalist, functional remote that is quite straightforward to use. Apart from controlling the TV, this remote is a universal controller for other home-entertainment products.

The one area where the Samsung Q60 undoubtedly matches its more-premium QLED siblings is in smart TV features. Since it runs the same software and apps as its more expensive stablemates, the Q60 delivers a premium smart-TV experience, starting from the clean home screen to the rich integration with smartphones and smart home devices.

On the Q60, you have the Samsung SmartThings dashboard, which pairs with everything from your router to your connected appliances, making the TV a hub for controlling the entire home. Also, Samsung’s smart TVs are the first smart TVs to have access to the Apple TV apps. This means you can enjoy all your iTunes moves and shows as well as Apple’s upcoming original Apple TV+ shows without a separate tv box. In the current year or so, the app will find its way onto other smart TV ecosystems, but for the moment, it’s a Samsung exclusive.

Samsung pairs this TV with Bixby, which is the company’s response to Amazon’s Alexa. It suffices for basic voice interaction – like searching for shows, checking on weather conditions or sports scores – it does a fine job. Other functions, let’s say, complex search or adjusting the TV settings are occasionally frustrating since Bixby doesn’t quite understand what you readily say. This assistant. Is also on the slow side compared to other voice assistants available on other smart TVs.

But, if you’d rather use Google Assistant or Amazon Alexa, you can quickly pair a Google Home or Amazon Echo to the TV and use your favorite voice assistant. 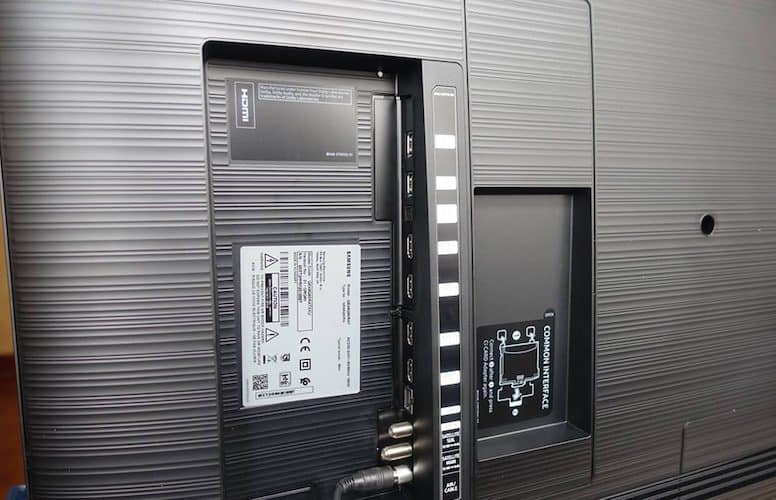 Samsung’s QLED range of TVs are known for exceptionally good performance when compared to other LCD TVs. And while the Samsung QN65Q60RAFXZA does offer excellent performance in some aspects – color quality and motion handling, in particular, are impressive – the total package is held back by issues that simply don’t show up on other models in the QLED line. Issues with backlighting, viewing angles and performance in High Definition Range (HDR) make the set a bit less impressive and that might make it compete against less-premium 4K TVs that nonetheless offer an equal or better picture overall.

When watching the brightly hued BBC One’s Dynasties: Emperor Penguins, it was very clear that the Q6F reproduces excellent colors. Whether it was the colony of Emperor penguins in the Atka Bay swatting their flippers at each other, or the group of mothers trapped in a ravine during winter and unable to carry their chicks on slippery walls, the colors were vivid than ever. Color is fairly accurate on this set, putting it in the same category with high-end TVs like the Sony XBR-X900F and the less expensive 55-inch TCL 6 Series Roku TV.

As expected, Samsung delivers decent HDR support, for as long as you don’t care about Dolby Vision. On the QN65Q60RAFXZA HDR standards are supported – HDR10+ and Hybrid Log Gamma (HLG) for live content. However, instead of using Dolby’s industry-leading option, Samsung opted for its in-house competing HDR10+. Content that comes in this proprietary format is not very common, with only Amazon streaming and 20th Century Fox’s Blu-ray discs offering HDR10+, but it’s still early to declare Dolby Vision a must have in TVs.

Nevertheless, HDR content looks impressive even with the set lacking localized dimming. Most movies you’ll be watching will render the kind of low you expect from an LCD panel. For most users, any TV whose price goes northwards of two grands must have excellent 4K as standard, but this one costs less and still offers solid colors.

While 4K performance isn’t the industry-mark for a decent TV set, Samsung does a good job in processing content delivered in 4K resolutions, with motion smoothing that makes for crisp details and no artifacts. You will be surprised at how well this set reproduces densely clustered details without the common screen pixilations ‘door-effects’, even when the images in question are of low quality. Fast action appears very smooth, with cars and fight scenes in movies coming out with minimal stuttering. 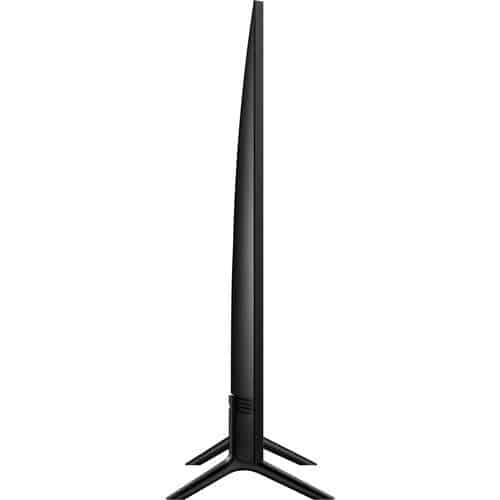 The Samsung Q60 is a great gaming TV with support for game consoles. Samsun’s QLED TV automatically detect when a console is connected and adjusts the display mode accordingly. For instance, when you connect an Xbox One X, the Q60 supports almost every feature and display mode offered by the console.

Gaming in 4K is supported at up to 60Hz, as is HDR10 for gaming and video capture. For content streaming, it supports 10-bit color and multiple frame rates (24, 50 and 60Hz), along with HDR10 for streamed content. And that brings out one predictable omission on this Samsung TV: While the Xbox One X can play back Dolby Vision HDR content, the Samsung Q60 doesn’t support it, thanks to Samsung’s HDR10+ format.

That aside, the QN65Q60RAFXZA offers one unmatched perk for gamers: lag times as low as 16.4 milliseconds. That makes this set one of the most responsive TVs around for gaming, coming in behind on the Hisense 55H8F (14.2 milliseconds).

The Samsung Q60’s 2.1 channel audio and twin 40-watt speakers can handle high volume, but it may not offer the rich sound you would get from a set with additional speakers for simulated surround sound. In fact, we’d recommend pairing the Q60 with a Samsung HW-Q60R Harman Kardon soundbar for better sound overall.

The Samsung Q60 QLED TV is a showcase of many great things, from Samsung’s impressive smart-TV platform to its robust gaming capabilities and elegant design. If you want to upgrade from a low-cost model but aren’t willing to spend several thousands for a premium OLED, Samsung’s QLED TVs continue to provide the best alternative LCD panels you can’t beat. Issues like stubborn prompts and excessive Bixby branding may be fixed with an issue down the road, but right now they stand out as minor missteps in an otherwise excellent smart-TV platform.

Still, none of these flaws are deal-breakers – the Q60 is an excellent TV -with a few flaws like everyone else – and they don’t keep it from being one of the best. If you’re in the market for a 4K set, don’t write off the Samsung QN65Q60RAFXZA QLED – you might easily miss out on a supremely designed and well-performing smart TV.