The Samsung UN55KU6600 line of curved 4K HDTV combines excellent picture quality with a broad feature set that will remain relevant for a few years to come. In fact, it is an excellent way to jump into 4K with style without spending a whole lot of money.

Samsung is a popular curved TV manufacturer, and most of its panels are available in most homes today. The Samsung UN55KU6600 (6 Series) once again proves that Samsung can make an excellent display with little consideration of the shape. This ultra-high-definition (4K) has all the enthusiast-level television features that you’d expect of a set of its caliber.

Talk of impressive contrast, accurate color, and a collection of features you’d need on a daily basis from an HDTV. It isn’t the best HDTV we’ve seen in its class, with competitors like our Editors’ Choice LG OLED C1 offering advanced features and thin bezels in their displays, but the Samsung UN55KU6600 still remains a top contender. That said, it suffices as a stylish, attractive way to move up to 4K without the distracting light bloom on flat panels — as the KU6600 sports a curved display.

The 55-inch curved is bordered by a flat plastic bezel, tapered slightly inward like most picture frames. It eschews the shiny metal edging or other bells and whistles of Samsung’s high-end models, save for a chrome Samsung logo on the bottom bezel. Nevertheless, it still has the same attractive looks of premium stablemates, and as usual, the curved panel is stunning. The screen comfortably sits securely on a somewhat large, T-shaped black plastic stands that sports a brushed gunmetal finish on the curved front of the face.

Samsung was quite generous with ports for connectivity. The back of the television features a handful of other, less commonly used ports, while a number are placed facing right. These include an Ethernet port for a wired network connection (if you don’t want to use Wi-Fi), a coaxial connector for over-the-air/cable television, and composite and component video inputs (3.5mm, for use with the included adapters). Others include 3 HDMI ports, and 2 USB ports among others. It measures 48.9 x 12.2 x 30.7 inches and weighs in at 35.7 pounds.

Samsung’s Smart Hub-connected HDTV system is simple and easy to use, with bright, colorful tiles arranged across the bottom of the screen similar to those on LG’s WebOS 2.0 system. The major streaming video services are here, including 4K-capable apps for Amazon Instant Video, Netflix, and YouTube. There is also plenty of useful location- and subject-specific apps, like local news portals for a variety of stations.

These Smart Hub games aren’t noteworthy, but you’ll have to bring along your Bluetooth gamepads and it isn’t a replacement for a full-fledged game console or PC for serious gaming.

The included remote isn’t identical to the one included with Samsung’s JS9500 Series. On the JS9500 Series, the remote is a gently curved, rectangular black wand with a prominent squares navigation pad. On the KU6600, the remote has the same black wand but instead of a square navigation pad, it features a prominent round navigation pad and a handful of HDTV controls. There are built-in motion sensors that activate when you rest your thumb on the pointer, with options for Volume and Channels, as well as moving the on-screen pointer like a mouse.

Besides the apps, the UN55KU6600 also supports screen mirroring through Smart View App, so you can stream your smartphone or tablet’s screen to the HDTV. The Smart Hub also includes a Web browser, which is relatively easy to use thanks to the motion-sensing remote and on-screen mouse pointer. Smart functionality come in way of built-in Wi-Fi and Bluetooth.

Contrast levels, brightness levels, and color accuracy are the main features we all look out for in HDTVs. The Samsung UN55KU6600 delivers an acceptable contrast ratio, although slightly below the Vizio M65-C1’s 10,858:1, it is still a respectable showing, especially for a TV in the lower price range for curved HDTVs. If you want better performance than either of those options, you’ll need to invest a lot more in an OLED television, like the Editors’ Choice LG 65EF9500.

Its panel technology allows for perfect black levels, for vastly superior contrast. The Vizio M65-C2 shows similarly accurate colors. OLED once again goes further, as the LG 65EF9500 can display a broader range of colors than both TVs without any color skewing or tinting.

On the UN55KU6600 curved tv, 4K content looks excellent. I watched Hush on Netflix in 4K, and it looked sharp and vivid. Shadows and highlights had plenty of detail thanks to the screen’s solid contrast, and textures like Kate’s black hair were crisp and easily identifiable.

1080p video upconverted to the UN55KU6600’s native 4K also looks very good. I watched Casino Royale on Blu-Ray on the television, and fine details looked as sharp as they could without coming from a 4K source video. Some noise and artifacting were present when all image smoothing features were turned off, but setting noise reduction levels to Low produced a very crisp picture that lacked the blotchiness of overzealous image processing.

Input lag is the amount of time it takes for a display to update after receiving a signal, and this is one of the few areas in which the UN55KU6600 disappoints. The HDTV showed an input lag of 114.6 milliseconds, which is twice as high as most screens we test. If you play very fast-paced video games that require precise inputs, this isn’t the best display for you. Ideally, a dedicated gaming monitor can show less than a tenth the input lag of the UN55KU6600, but for big screens you’ll have to realistically settle for a third to half the lag.

Under normal viewing conditions, the Samsung UN55KU6600 is a not-so-excellent energy saver, even with our calibrated settings and no energy-saving features. Setting the Energy Saving setting to Low makes that watts number drop and it dims the screen slightly. You can make the HDTV use less power with higher Energy Saving settings, but this dims the screen further. This is about in line with similarly sized 4K TVs.

There isn’t anything particularly wrong with a curved display, but we’ve consistently found it doesn’t improve the viewing experience in any observable way. Whether you should get a flat panel or a curved one is a matter of personal taste more than anything else. The Samsung UN55KU6600‘s design looks striking, like most curved televisions, but it doesn’t offer any real benefit beyond style. And it should be noted that curved TVs are more difficult to mount.

The Samsung UN55KU6600 curved TV series is an excellent way to jump into 4K with style. We’re still not sold on the curved display, but the ultra-high-definition picture quality is undeniable and the list of features is comprehensive. The Vizio M65-C2 stands as one of the best values you can find in big-screen 4K HDTVs, and it delivers Smart Functions that can’t be beaten.

On the other hand, if money’s no object, the LG 65EF9500 offers the best picture available. But if you want a big HDTV that can handle 4K and you don’t want to break the bank, the Samsung UN55KU6600 is the way to go, whether you prefer curved displays or not. 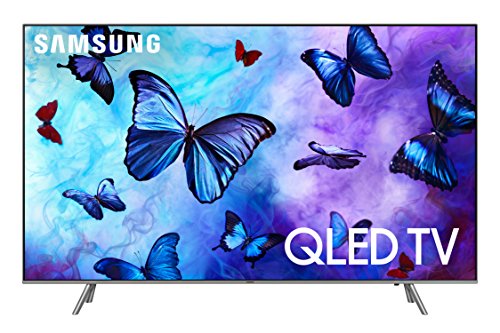