The Sceptre C305B-200UN is easily one of the best budget gaming monitors in the market, With excellent performance for the price, AMD FreeSync for tear-free gaming and a versatile, sleek design

Sceptre may be best known for its budget TVs and monitors, but the company’s expertise in displays makes it a force to reckon with in the broad monitor world. The 30-inch Sceptre C305B-200UN proves that, packing feature after feature into a beautiful curved UWHD display that touts a high contrast ratio, excellent response times and premium touches such as AMD FreeSync.

While its billed as a gaming monitor, the spec sheet and size put it in the midst of productivity monitors, and it can easily double up as a home-entertainment screen. In fact, its enormous size and stylish design work in tandem with the monitor’s curvature to put you into your games in a way a traditional monitor doesn’t.

Whether you love curved displays, or think it’s a nothing more than marketing hype, this sprawling, beautiful display makes traditional monitors feel flat in more ways than one. Those perks and a reasonable price earn it a spot on our best gaming monitors list. 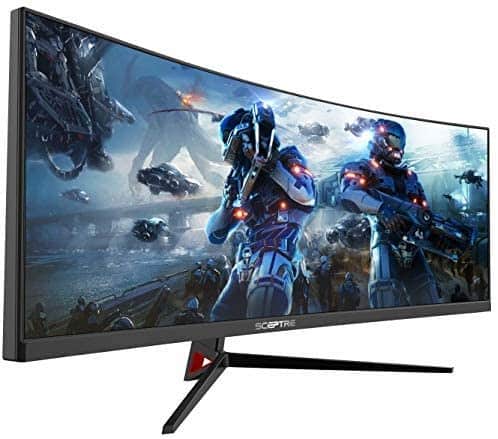 Like its 27-inch sibling, the Sceptre C275B-1858RN that we reviewed recently, this Spectre gaming monitor has a minimalist aesthetic, for a curved gaming monitor. It lacks the splashed colors and aggressive, angular stylings seen on competing monitors like the

Alienware XW3CK and AOC CQ32G1. Instead, the monitor’s chassis is made of a dark-grey plastic, a familiar design among Sceptre’s office/productivity monitors.

The only real node to the gamer aesthetic are two red LED strips at the back of the monitor, that can be disabled in the OSD. Pretty everything else looks understated, making this panel look more of a workhorse than a gamer. The V-shaped base supports the 30-inch screen, and it doesn’t mimic the over-the-top designs used on so many gaming monitors around.

The display itself has a curved panel. When compared, the LG 34UC89G has a gentle curved with a 3800R curve, meaning the arc itself has the same radius as a circle with a 3800-millimeter circumference – while the Alienware AW3418DW (1900R) has a more pronounced curvature. The Sceptre C305B-200UN is more aggressive than both, with a curvature of 1800R, since lower numbers indicate a smaller, tighter arc. 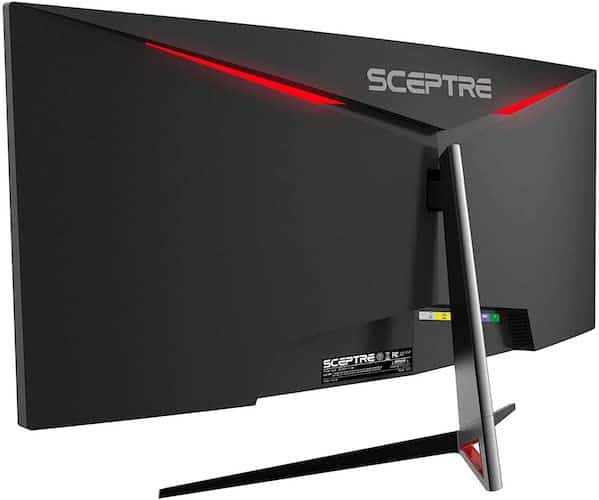 This Sceptre curved monitor is marketed as a gaming display, but it equally shines as a productivity monitor. The 200Hz refresh rate lets games run silk smooth, though you do get some pixilation on fast moving objects, especially when dark pixels are involved. If you experience that, you can set the monitor to 144Hz, at this refresh rate, ghosting is minimized.

The display also boasts a 5-millisecond response time, which is lower than the 1ms available on most gaming monitors, but it’s still ideal for fast-paced action. It also supports AMD’s Radeon Freesync, which matches frame rates and refresh rates to prevent screen tearing. In many respects, FreeSync is similar to Nvidia’s G-Sync technology, only that it doesn’t require the added expense of additional hardware inside the monitor.

While VA panels are known for inferior response time, the C305B-200UN delivers the kind of performance you’d certainly expect of an inexpensive 200Hz VA panel. So, depending on the game you’re playing the available gaming preset modes (FPS and RTS) will adjust the settings accordingly.

Still, the monitor’s color quality is pretty great. When playing Grand Theft Auto V, you’ll notice that night scenes look a little more true to life, with bright, glowing headlights and signs that pop against the low light. Colors look vibrant, including the blue images of California and the red sports car, all with sharp and clear details at 2560 x 1440 resolution.

When playing less demanding games, you can take advantage of the full 200Hz refresh rate, and if pixel trailing becomes too noticeable, you can switch back to 144Hz. The Sceptre C305B-200UN has a less than 5ms input lag, which is barely noticeable even at 200Hz.

With excellent performance for the price, AMD FreeSync for tear-free gaming and a versatile, sleek design, the Sceptre C305B-200UN is easily one of the best budget gaming monitors in this category. It’s also one of the most affordable ones, given its feature set.

However, it’s not perfect.  The curved display introduces some problems into an otherwise stellar monitor, such as color issues and warping at the curved ends of the panels. The 34-inch Alienware AW3418DW offers a higher 1440p resolution and touts Nvidia G-Sync, which is a better version of adaptive frame-rate technology and the only option for anyone using Nvidia graphics card. But it costs more for the extra gaming features.

All that said, the Sceptre C305B-200UN is still a superb choice for enthusiast gamers, content creators and office users, and is substantially more affordable than the Alienware AW3418DW. If you especially want a value monitor for gaming and work, this is the monitor for you. 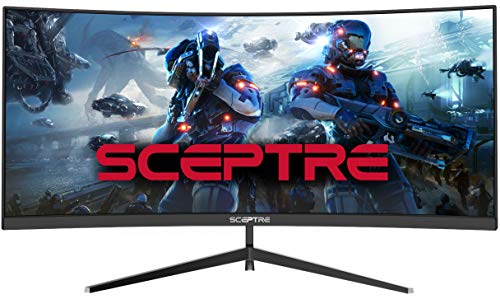