The Sceptre E448B-FSN168 is a great super ultra-wide monitor for work and media consumption and delivers good gaming performance too. With an aspect ratio of 32:9, it’s a stunning display that costs much less than competing ultrawide monitors. We only wish its vertical resolution were better.

We’ve seen some massive PC monitors dominate the market in the last few years, but the Sceptre E448B-FSN168, with its 32:9 aspect ratio, is one of the most affordable widescreen panels currently on offer. Its 44-inch (43.8-inch viewable) screen has a great presence (even before you turn it on) with its signature white screen bezels and stand. It looks like something that would easily fit into a living room.

Sporting a 3840×1080 (dual FHD) resolution, it’s capable of displaying a crisp and detailed Windows desktop and can support up to four (yes, count ‘em) full-sized A4 windows to be stacked next to one another. This is a great productivity boon for those working with multiple documents, browsers, and, particularly spreadsheets – you no longer have to do dual-27-inch monitor setups.

As ever with super-wide monitors in the range of 38-inch upwards, turning your head to look from one end of the screen to another can get a bit tiring on your neck. On the E448B-FSN168, there’s no curve to the screen that would reduce the distance your eyeballs need to refocus as they pan from side to side, but it still looks and feels comfortable. However, there’s the Blue Light Shift that reduces blue light, allowing you to use the monitor comfortably without straining your eyes.

Ultimately, this monitor looks lovable, but it feels like one that’s more designed for multimedia and productivity than gaming. It has decent gaming extras, including AMD FreeSync Premium support, a 120Hz refresh rate, 1ms response time, and HDR 600 support alongside high-quality built-in speakers.

The usual array of monitor adjustments and connections are available to tinker with, but they are not far from defaults. A remote is included too.

If it had a higher refresh rate – may be 144Hz or 240Hz – for better gaming capabilities, the Sceptre E448B-FSN168 would hands down be brilliant, but even without, it’s fantastic for work and play regardless. It’s expensive, but one of the most affordable in this 43-inch space, and many cashed-up casual PC users will find great value here.

The E448B-FSN168 panel is just about any wide-screen that would fit in a modern, compact living room, thanks to the white color that looks much better than the traditional black color behind the screen and on the stand. However, the stand does tend to scream that it’s still a computer monitor at heart, meaning it’s not cut to be a centerpiece of a family living room.

However, having an ergonomic stand on a computer monitor has its benefits. t comes with some generous adjustments including –5º to 15º tilt, –15º to 15º swivel, and a 120mm height adjustment. Such a setup makes accessing the input ports relatively simple, and a large cutaway at the base of the display around the back makes connecting your gadgets even seamless.

Talking of connectivity, the E448B-FSN168 has excellent input options, all located at the back of the panel. There’s a USB Type-C port, two HDMI ports (1.4 and 2.0), a DisplayPort, a headphone jack, and a USB hub with three USB A 3.0 ports and a USB-B 3.0 port. Most monitors max out with a pair of HDMI and DisplayPort inputs, though USB Type-C is becoming popular in high-end gaming models, too.

The Sceptre E448B-FSN168 has an IPS (In-Plane Switching) panel. On paper, IPS should deliver excellent viewing angles and bright colors than VA panels, but the latter delivers excellent contrast ratios and excel at providing incredible levels of detail in gaming and movie scenes.

Due to the sheer length and size of the E448B-FSN168 you’ll probably be viewing at least some of the screen at an angle, but you won’t notice any deterioration in image quality even at the extremities when sitting in front of it at a desk – but a curved screen would’ve been better.

As mentioned, the Sceptre E448B-FSN168 is designed more for productivity use than for gaming, even though it has all the credentials of a gaming monitor. Nonetheless, Windows 11 does a good job of scaling the desktop to the super-ultra-wide aspect ratio. It gives you a lot of screen space to play with, and you’ll be able to work quite comfortably with a large number of programs, apps, and websites all open at once.

However, the 1080-pixel vertical resolution limits the available vertical space, and if you’re coming from a monitor with a WQHD resolution like the Samsung Odyssey G7, you may find the Sceptre IPS 43.8-inch monitor a bit narrow.

Still, being able to load so many windows open while having one monitor on your desk is an excellent feature, and image quality out of the box is fantastic. The included remote helps you navigate the monitor’s adjustments, instead of joggling around with the joystick button.

While unlike the 49in Samsung CRG9 the Sceptre E448B-FSN168 isn’t designed primarily for gaming, there will be people who want to use it as one, with the super ultra-wide aspect ratio and 144Hz refresh rate being two compelling reasons. Sure, most modern games can cope with the unusual resolution and aspect ratio of the E448B-FSN168, but you may have to tweak a few settings to get most games to display properly.

The fast response time (1ms) and AMD Freesync Premium of the Sceptre E448B-FSN168 compared to most gaming monitors make gameplay feel equally fast. We’ve recently seen gaming monitors with both G-Sync and Free-Sync technology that combines high refresh rates with low response time for butter-smooth gameplay, although none of them can match the ultimate spectacle of the Sceptre E448B-FSN168’s 32:9 aspect ratio.

If the gaming-oriented Samsung CRG9 was a bit too expensive for your pockets, the Sceptre E448B-FSN168 is a very good alternative, offering the same rare 32:9 aspect ratio for a much lower price, and without sacrificing too many features.

It’s not quite a replacement or as good for gaming as the CRG9, but it still puts a good show – that super ultra-wide aspect ratio really can be impressive when you’re playing games. As designed, it primarily has some great productivity tools to make it an excellent choice for business use, especially if you often work over numerous monitors, as you can now swap out those for a single Sceptre E448B-FSN168 ultra-wide monitor.

Our only issue is the lack of vertical resolution – at 1080 pixels it makes things a little tight, but if you’re used to 1080p monitors, you’ll love the extra horizontal space. 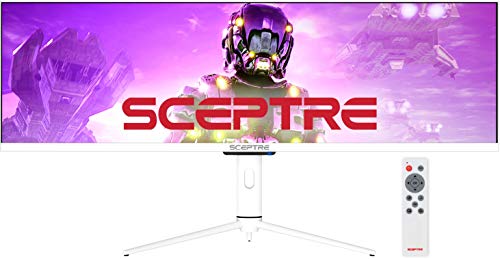