Our review unit, the SkyTech Archangel is a fantastic midtower that packs fluid 1080p performance in a premium package, but ends up costing much less than most competitors in its class.

When we sit down and factor the purpose of boutique PC builders in 2020, it’s certainly to create some of the most capable gaming rigs that you can’t do yourself. And, they do it quite affordably. The SkyTech Archangel arrives at a time when building your own PC is easier than before and competing custom PC manufacturers are creating unique chassis and souped up cables that are a sight to behold – you only need to look at the CyberPowerPC GXiVR8060A8 to see that.

The SkyTech Archangel uses a metallic chassis that’s very sturdy. Measuring 17.9 by 8.3 by 16.4 inches, it sits pretty well in the middle ground for a midtower. The look is gamer without being garish, especially with the minimalist aesthetic.

The internal structure and most of the exterior panels are made of steel, while the front and left panels are tempered glass. The latter provides a clear view of the roomy interior, you also get to see the trio of LED-lit fans.

The greyed-out inside looks much better than bare steel. It can have the side effect of making things a bit dark, but that’s not an issue with this Archangel; its three ring fans are brightly lit in RGB colors and extreme patterns. 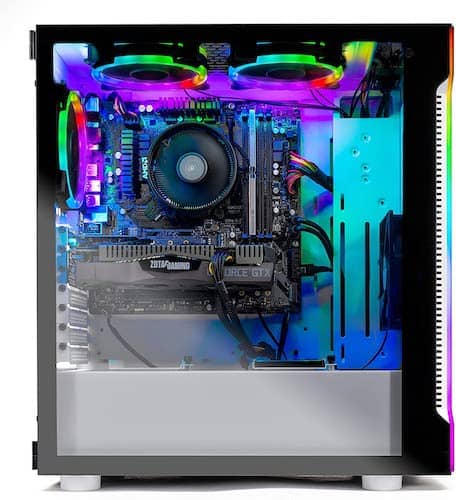 The mid-tower’s front edge has a pair of USB 3.1 Type-A ports and separate headphone and microphone jacks. We’d like to see a USB-C port and a media card reader up here for enhanced convenience.

Around the back, the motherboard ah five USB 3.1 ports, one USB Type-C, one HDMI, and an Ethernet jack, alongside headphone, line-in, and line-out audio jacks.

More ports are available on the Nvidia GTX 1660 Ti graphics card, which has one HDMI and three DisplayPort video-out connecters, in case you need to do a multi-monitor setup. Also bundled in the package are a standard gaming keyboard and mouse, the monitor is bought separately.

The SkyTech Archangel in our review is packed with an AMD Ryzen 5 2600X CPU, 16GB of RAM, 500GB SSD storage and an Nvidia GTX 1660 graphics card. These are respectable specs these days, especially for a gaming PC that can be had for less a grand. To be sure, this confirmation is more than capable of playing modern PC games at 1080p without issue. Playing Call of Duty Modern Warfare (2019) is a breeze on a 1,920 x 1,080 display, as is Rage 2 (2019). In fact, at that 1080p resolution and high setting, this PC is capable of reaching more than 70 fps on the Shadow of the Tomb Raider (2018).

The GTX 1660’s benchmark scores tell the same story, too. In Cinebench and Geekbench 4.3, it scores a single-core number that’s exactly what we’d expect from the CPU in here. The in game, this PC is a solid performer, too, with the Archangel hitting an average of 73 fps in Star Wars Battlefront II, which almost 18% faster than the RX 590 and 23% faster than the 6GB GTX 1060. However, it is almost 15% slower than the GTX 1070.

At the end of the day, the SkyTech Archangel is fine. If you take price and the latest trend in PC gaming into consideration, you immediately realize that it’s actually a pretty capable gaming rig. While at it, we can’t simply ignore a few of these things. For instance, not only can you save a few dollars by building your own rig with the same hardware, but you can find the same hardware from other boutique builders for less. The only caveat is that you can’t beat the kind of workmanship SkyTech did on this machine, and if you’re not careful, you might end up spending more to nab the same level of performance.

It’s simply easy to recommend the SkyTech Archangel to anyone shopping for a stylish, capable and upgradable gaming PC that costs less than what competitors are offering out there. 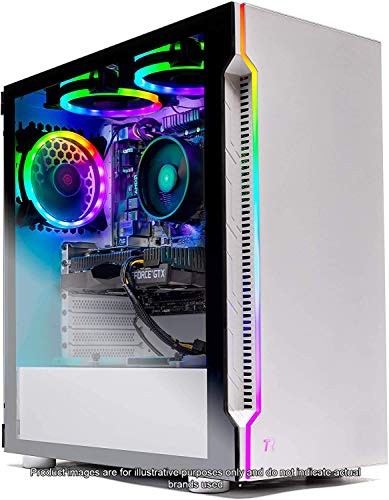