SkyTech accomplishes what it set out to do with the new SkyTech Shiva: provide a professionally-built platform for gaming. This pre-configured model we reviewed is a reasonable priced relative to assembling it yourself from parts.

The SkyTech Shiva is a compact gaming desktop for enthusiast gamers. Our review unit is the mid-tier model, equipped with an AMD Ryzen 5 2600 CPU, Nvidia’s GeForce RTX 2060 GPU, 16GB RAM and 500GB solid-state drive for storage. Unsurprisingly, it’s more than ready to play games in 1080p at high refresh rates, and can even achieve 60fps on 1440p gaming.

We like the compact size and most of the design, though the fans can be a bit loud. While it’s undeniably speed, other desktops we’ve reviewed at around the same price have eked out better performance, and those with Nvidia GTX 1600Ti came closer than we’d expect.

As configured, the Shiva looks like a better value if you’re otherwise smitten with this desktop, but the iBUYPOWER Element 9260 balances gaming prowess and productivity performance for a few dollars less. On the other hand, the CyberPowerPC Gamer Supreme SLC8260A2 remains our Top Pick for its combination of price, power and style.

The plus part on the SkyTech Shiva PC comes from its upgraded graphics (a GeForce RTX 2060 instead of a GTX 1060) and the solid-state storage (500GB versus 240GB) on the base model. Assuming the additional cost won’t break the bank, the 2019 model’s feature set is a no-brainer upcharge. The Shiva model otherwise shares its specifications with the SkyTech Blaze II except for the graphics card.

Mainstream PC makers don’t always have a pricing advantage over boutique gaming PC builders. The HP Omen Obelisk 875-1023 tower packs a sleek design, a Core i9-9900K processor and Nvidia’s GeForce RTX 2080 Super but comes at premium as well. SkyTech’s Legacy Mini fares better, priced just under a grand when equipped like the Shiva, but with a smaller design footprint.

The SkyTech Shiva is based on a mid-tower case, featuring a tempered-glass panel on the left side, offering uninterrupted views of the interior. On the outside, the PC has straight edges for a clean, non-polarizing look that’s plain white a shift from the usual black case designs. the case measures 26.2 by 14.2 by 24.5 inches (HWD) are normal for a midtower. I like the fact that there’s no bare steel anywhere on this tower.

For connectivity, there are four USB 3.1 ports, two USB 2.0 ports, a single HDMI port, an Ethernet port and audio/mic inputs alongside a built-in Wi-Fi antenna for wireless networks. Also bundled into the package are a free RGB keyboard and mouse.

The SkyTech Shiva isn’t the most powerful configuration preset among pre-built gaming PCs around. However, it does include all the power you need for playing today’s AAA titles at 1080p, 1440p, but it will struggle with 4K resolutions. If you’re gung-ho about 4K, consider upping your graphics card choice to a GeForce RTX 2080 Super, as the GeForce RTX 2060 in our unit is right on the edge of playability in some of today’s games.

For the price you’re paying, anything above 60 FPS on high settings is nothing short of excellent. Surprisingly, even when you adjust everything to Ultra quality, the clarity and fps take a dive but it doesn’t go below 60 fps. That’s expected for an RTX 2060 graphics card, but it still manages to hold its own against pricey GPUs. After all, you’re paying for a budget gaming machine that should only get you playing in Full HD (1080p) and high settings, and anything above the standard 60 fps is impressive.

When not playing, the SkyTech Shiva packs AMD’s Ryzen 5 2600 (3.4GHz), a hexa-core processor that’s an equivalent of intel’s Core i5 9400F processor; that you can use for productivity tasks, including media editing, word processing and other general computing task you may have. With 8GB RAM and 500GB SSD, this PC is powerful enough for use as a main PC in a small-office setup, and the fact that the front panel isn’t decorated with blazing LEDs makes it a good candidate to use almost anywhere.

Compared, the CyberPowerPC Gamer Supreme SLC8260A2 will get an edge in CPU-intensive tasks, thanks to its super-expensive RTX 2070 Super graphics card paired with a 9th-generation Intel Core i7-9700K processor, 16GB RAM and a 1TB NVMe SSD. It costs a few hundred dollars more, but it justifies the price in a highly upgradable case design, and strong out-of-the box performance for both work and play.

SkyTech accomplishes what it set out to do with the new SkyTech Shiva: provide a professionally-built platform for gaming. This pre-configured model we reviewed is a reasonable priced relative to assembling it yourself from parts. It’s hard to envision anyone doing a cleaner wiring job, and the component section in our review is top-notch. Other highlights on the Shiva include a clean, glass exteriors, decent cooling, component expansion, and a high degree of factory customization.

Overall, the components are all high-end, and the performance is undoubtedly strong, but it comes in a shade shy of some similarly outfitted desktops on raw performance.

Competitors to the SkyTech Shiva include CyberPowerPC’s Gamer Xtreme GXiVR8060A8, which is our Editors’ Choice for budget gaming desktops. In addition to a clean aesthetic, it offers solid gaming and VR performance thank to a 9th-generation Intel Core i5-9400F processor, a refreshed Nvidia GeForce GTX 1660 (6GB) graphics card, 8GB DDR4 RAM and 240GB SSD + 1TB HDD storage. It costs slightly less, and is definitely a great alternative if you want to save a few dollars, enough to buy a gaming monitor – something like the 24-inch Sceptre C248B-144RN. 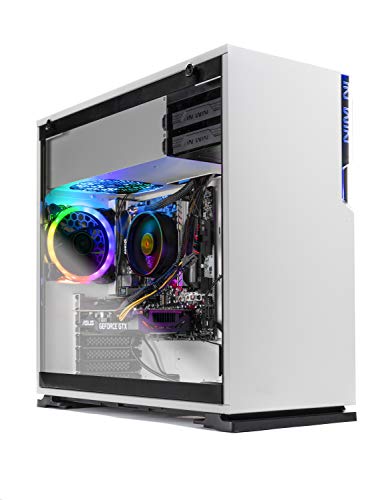 If you need something more powerful for gaming and work, the CyberPowerPC Gamer Supreme SLC8260A2 offers the best of both worlds. The Gamer Supreme is offered in a standard tower casing, but packs a 9th generation Core i7-9700K processor, Nvidia’s RTX 2070 Super GPU and tons of SSD storage. All these point to a future-proof gaming PC that costs much less that similarly configured mainstream gaming PCs from the likes of HP, Acer, Dell among others.

Yes. If you like the look and size of the SkyTech Shiva in general, that’s the main attraction here I’d point to, but it goes a notch higher with solid performance at a great price.