The SkyTech ArchAngel (ST-ARCH-GTX1050TI-V1) isn’t pricey, but there’s no question, you’re getting a well-designed, speedy gaming system for your buck. It doesn’t stack up to more expensive gaming systems, but it’s still among the best in its class.

How much luxury are you willing to pay for in an ultra-gaming PC? Often the main consideration when purchasing a boutique-built rig that’s incredibly affordable like the Skytech ST-ARCH-GTX1050TI-V1, but super polished and powerful as its top-tier competitors. Priced to make DIY gaming desktops sound scandalous, the Archangel is sweetly configured with the Pascal-based Nvidia GTX 1050 Ti graphics card, a 3.5 GHz AMD FX-6300 processor, useful ports and enough storage.

It isn’t much of a stunner as our Editors’ Choice, the CYBERPOWERPC Gamer GXiVR8060A, in terms of aesthetics and performance, but it’s a shoo-in for anyone with a not so-gigantic, and offers better DIY options.

The Sci-Fi inspired design of the ST-ARCH-GTX1050TI-V1 is, without a doubt, its raison d’être, and it’s very easy on the eyes. It screams gamer, but its near-rectangular chassis is white, with a pair of tapering lazy-black covers through which angel eye LEDs breathe light to the exterior, and beneath them is a black vent. The front upper deck is white, but it bent forward along the axis, but separated by a thin strip of lighting that runs up the front. The sides are dotted with white/blue panes, while the rest of the body is white, save for the black rear panel that holds the ports.

The design isn’t one of the ultimate space savers in this category, at least we didn’t expect it to be, staying clear of the smallest footprints of most mid-tower desktops: The system measures 20.2 by 8.5 by 18.2 inches, and weighs 26.6 pounds. It will look imposing in any room, and the design itself looks bold enough for serious gaming. Small size gaming systems like the ASUS GR8 II-T069Z might squeeze into a tight spot better than the Archangel does, but the design is more useful if your space lacks space.

There’s an optical drive, a bonus, as most manufacturers are shrugging it off, with the assumption that you’re more likely to download your PC games online from services like Steam or origin. As it is, you get a smooth array of access ports – two USB 3.0 and seven USB 2.0, but you don’t get a Type-C port that is becoming common among ultrabooks and gaming laptops. Others include a 7-in-1 Audio port, and an Ethernet port in the back, alongside Wi-Fi support. If you need to hook up your desktop to multiple displays, you have one DL-DVI port, one HDMI port, one VGA port and a display port.

For storage, you have a 1TB 7200RPM hard drive, which is quite standard for entry-level gaming desktops. Compared: the CyberpowerPC Gamer SLC8600A gets a 240GB solid-state drive (SSD) for windows and programs, and an extra 3TB 7,200rpm hard drive for storing your downloads, while the CyberPower Xtreme VR GXiVR8040A2 comes with a 128GB NVMe M.2 SSD+ 2TB, 7,200rpm SATA hard drive for data storage. That’s enough system memory for any current AAA game, as well as enough storage space for thousands of hours of entertainment, including games and video downloads. Bundled into the package is a standard gaming mouse and keyboard, and Windows 10 (64-bit Professional) pre-installed.

The SkyTech ArchAngel features a six-core AMD FX-6300 3.5GHz processor (turbo up to 4.1GHz), Nvidia’s GTX 1050 Ti (4GB DDR5) graphics card, and 8GB system memory. More memory would be useful, and the system is capable of upgrades to 32GB, but these are pretty speedy components as is. The processor gets an excellent score of 6300 points in CPU Mark test, putting it somewhere on the middle of the road (in-between the Intel Core i5 and Core i7) in terms of performance.

For users in the market for a desktop PC that can handle both media projects using Adobe Suites and enough gaming muscle, then this machine isn’t easy to pass by. On the other hand, the Cyberpower Gamer SLC8040A’s Intel Core i7 processor has a CPU score of 10,998 points, which is quite impressive for gamers, keeping in mind that it can burst up to 4.2GHz in Turbo mode, making it a better performer Archangel desktop.

Gaming is the main highlight here, and the GTX 105O Ti helps the ST-ARCH-GTX1050TI-V1 excel as expected for a budget gaming PC. It isn’t Nvidia’s top-of-the-line graphics card, but it does suffice with strong performance or most midrange systems in which its installed. The desktop maintained an average 69 FPS on Titanfall 2, 68 FPS on Battlefield 1 and 47 FPS on Fallout 4, all played at 1080p (1920-by-1080) resolution. The Corsair One Pro gets a GTX 1080 GPU, making it a gaming power house with smooth playable frame rates.

Incredible Power, for Much Less

The Skytech ST-ARCH-GTX1050TI-V1 isn’t pricey, but there’s no question, you’re getting a well-designed, speedy gaming system for your buck. It doesn’t stack up to more expensive gaming systems, but it’s still among the best in its class. In as much as its missing extras like an SSD for fast booting, it’s still good value. The bolstering design is a bonus if you need stand out in your room, and it’s easy to open up.

It’s powerful enough to get you started and allows you to gauge your interest in hardcore gaming. With all those in its favor, it suffices as one of those gaming rigs that are not easy to pass by, thanks to a perfect mix of features and performance. 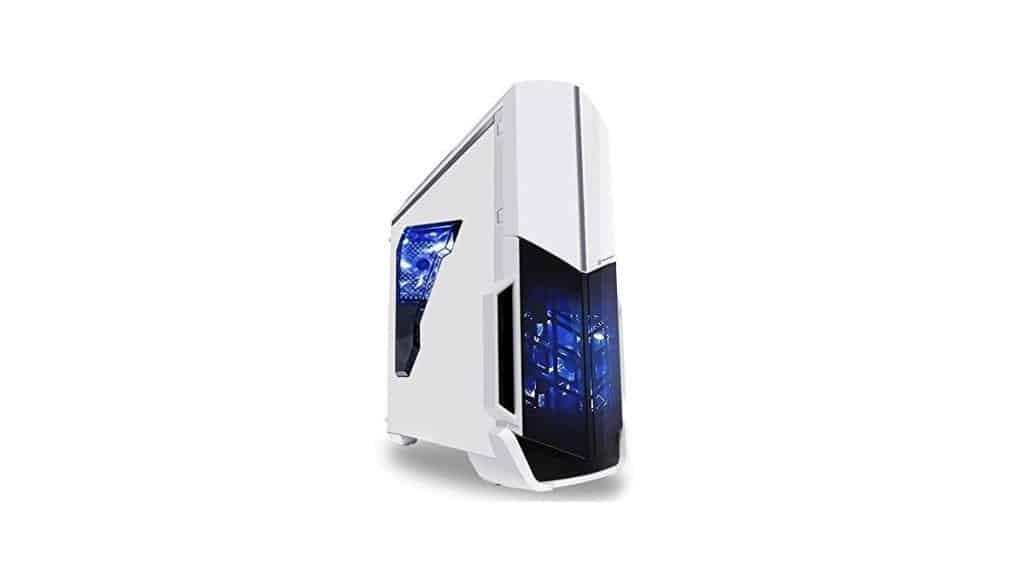