This high-end iteration of the SKYTECH ST-OMEGA-VR1080-7700K is a superb performer, in all fronts, and this gaming PC is built into a minimalist white case that belongs to much expensive machines.

For custom built gaming PCs, SkyTech’s systems are often highly configurable, with some of its units pushing the boundaries with top-notch components. Plus, if you need to recommend a system for a friend or family member, but want to avoid the obligation of providing on-going support, a pre-built rig is the best way to go. For that, the pretty sweet SKYTECH ST-OMEGA-VR1080-7700K is among the best you can have. For its high-end build, it’s prohibitively expensive, but it has the best parts, making it a win-win.

What you’re getting for the dollars is a nice collection of pre-assembled hardware christened in a Zotac GeForce 1080 graphics card with 8GB memory. Performance is as good as you’d expect for a top-tier gaming desktop, making it an easy choice to recommend.

With the OMEGA-VR1080, you’re getting a big system for a big price. It’s a big system. In buying the OMEGA, you’re going after power and size, in a package that’s meant to be seen as much as it’s meant to run your games and productivity tasks smoothly. It’s a modern minimalist design with a clean white finish measuring 19.6 by 8.4 by 18.8 inches (HWD), meaning you’ll need enough room on your desk for it to fit perfectly. At 42 pounds, it isn’t one of the lightest systems around; hopefully, you won’t have to move it once you place it in position.

Just about the only eye-catching design aspect here is the interior arrangement of components, viewable through a tampered side glass door that swings open and latch perfectly. Inside, there’s a delicate liquid-cooling system alongside a pair of pre-installed cooling fans on the front panel to provide the best cooling effect even on strenuous battles. There is intricate red LED case lighting, and neat cable management. You can easily tell where much of the cost comes from by looking through the windows. The system is finely assembly to perfection, and there are few DIYers out there who can match this caliber of work.

The system doesn’t have an optical drive, which is fine given that these days you occasionally need to play from DVDs, as most PC games can be downloaded from digital services like Steam and Origin. Plus, having one on the front would be a scratch on the case’s stylish austerity. Out of the box, the system has an excellent I/O selection: 1 x DVI, 3 x Display Port (Version 1.4), 1 x HDMI | 1 x USB 3.1 Gen2 Type-A, 1 x USB 3.1 Gen2 Type-C, 4 x USB 3.1 Gen1 Type-A, 2 x USB 2.0, 2 x USB 3.0. The system is Wi-Fi ready, and comes with a bundled keyboard and mouse. 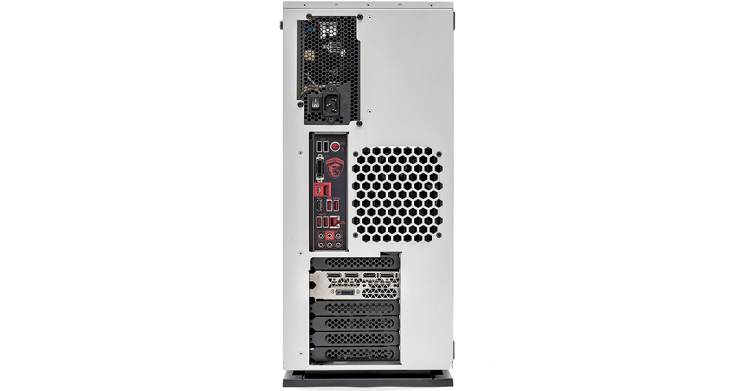 The Nvidia GeForce 1080 graphics card, overlain with liquid-cooling plates, is the main feature for showcase here. There’s 16GB of G.Skill 2400GHz memory, a 240GB OCZ TL100 M.2 boot SSD, and a huge 2TB hard drive for storage. The power supply is a Thermaltake 700W, far better than what you’d find in most systems, and wrapping it all: an Intel Core i7-7700K processor. The motherboard underneath is a high-end Gigabyte GA-Z170-Gaming K3, that’s continuously themed with red lighting. All these parts are highly customizable when ordering, or later, though you won’t need to do much in terms of upgrades.

With its raison d’être being exquisite planning and design, and premium components, the ST-OMEGA-VR1080 is a real workhorse Although you can’t see the hidden 120mm cooling solution block, the machine is a powerhouse on almost all fronts, and the Kaby Lake CPU delivers even more overhead. As configured performs well on benchmark tests, with its  4.2GHz, the seventh-generation Intel Core i7-6700K processor, 8GB Nvidia GeForce GTX 1080 and 16GB DDR4 memory are more impressive on most fronts.

For general performance, this system gives you more computer than you pay for; giving it a hang-on among the high-end desktops we’ve tested recently. As it is, multimedia projects should be a breeze, that’s if you need to work on video or photo editing while not gaming.

Gaming and 3D performance is where the OMEGA really separates itself from the pack. Most of its immediate competitors are fast desktops equipped with GTX 1070s in SLI, but the 1080 upgrade steers the system to the front, delivering the best frame rates per second (FPS) in the category. Set to Ultra quality settings and 1080p resolution, the ST VR1080 and its GTX 1080 doesn’t struggle to soar 249 frames per second on Heaven test and 134 frames per second, far ahead of the usual 60 fps target.

To get a grip of its resilience, bumping the same tests up to a 4K resolution, indeed very demanding for any system, it still managed to hit 102 fps on Grand Theft Auto V and 97 fps on Fallout 4. These are still smoothly playable frame rates, and not far off the typical GTX 1080 scores across the board, but still impeccable compared to other desktops using this graphics card.  The fact that it sticks so close to gaming rigs high up in the category like the Origin Chronos, make it a more desirable system given the price differences.

A Solid PC for Gaming and Productivity

The SKYTECH ST-OMEGA-VR1080 is undeniably a performance beast, that packs premium components assembled for a king. For what you’re paying, you’re truly getting a top-tier system with this configuration. For the price, I may not whole-heartedly recommend it, since I have handled systems like the CYBERPOWERPC Gamer Xtreme VR GXiVR8080A, which has a better configuration, for around the same price.

That said, the assembly, cooling rig, tampered glass side panel and luxurious count for much in the SKYTECH ST-OMEGA-VR1080-7700K. If you need power, beauty and customization in a super-exclusive package, you should seriously start from here. 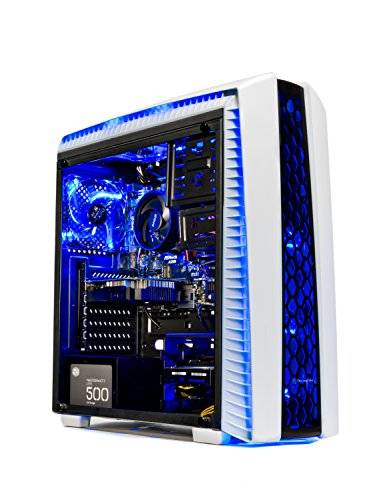