The 75-inch Sony X850F (XBR75X850F) is a beautiful, colorful and brilliant mid-priced 4K HDR TV. It does an excellent job in highlighting the improvements Sony has introduced over and above the already excellent series from last year.

Sony has proven that it can make very attractive, mid-tier, TVs. The company’s A1E OLED competes with LG’s appealing OLED models, and its top-tier LCD TVs can get impressively bright and vivid. Add the core functionality of Android TV for connected features and you get a pretty fathomable package. The Sony XBR75X850F is the company’s latest flagship LCD series, offering premium design and performance without pretty reaching the price and quality that OLEDs can.

Starting for a reasonable price, the 75-inch bringing along an X1 Extreme processor into the range, it stands out as a favorite for 2018. Clearly, the X850F is Sony’s souvenir to customers who need quality picture but can’t step up to Sony’s high-end A1E OLED and A8F OLED models.

It’s an impressive TV that delivers solid competition to other flagship LCDs, though, if shopping in this price range you should have one eye on OLED models. However, if you’re on a fixed budget and need a crisp sports TV for the Super Bowl, this 4K TV is an easy choice to recommend.

The X850F uses Sony’s minimalist, angular aesthetic. The 75-inch screen is surrounded by thin, brushed black metallic bezels, and has the same sharp angled corners as its predecessors. The bottom bezels look different with a chrome-colored trim that serves as an accent, and is low enough that it doesn’t get in the way of glares from overhead lights. There is an LED indicator hidden in the middle of the bottom bezel, beneath the Sony logo and serves as yet another flair on the front of the TV.

A pair of rectangular gray legs support the screen, protruding outwards from the back of the TV, forming a strong support base.  The power cable attaches to a rear-facing port on the right side of the screen, while the rest of the I/O ports sit in two rectangular recesses on the left. On the left recess there is an HDMI port, two USB 2.0 ports, and four 3.5mm connectors for headphones/audio out, composite/component video in, and infrared remote control with included IR blaster.  Other ports on the other recess are three more HDMI ports, a USB 3.0 ports, an Ethernet port, an optical audio output, an RS-232C port and an antennae connection. 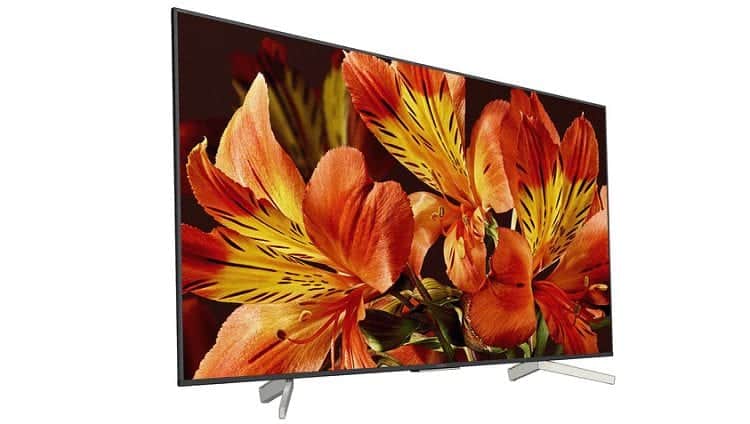 Right now, the Samsung Smart Touch remote is the best we’ve used and we hoped that Sony would maybe copy the design in the new flagship. Not so soon. On this series, the included remote is the usual blocky-buttoned wand with a black rectangle aesthetic. It has a circular direction pad and menu buttons in the middle, and a number pad above it as well as playback controls, volume and channel rockers below it.

About the only notable feature here is the Google Assistant button near the top of the remote that activates the built-in microphone that enables you use the voice assistant on the TV. Also, there are two dedicated service buttons sandwiched between the number and navigation pads that provide easy access to Google Play Movies & TV and Netflix. It feels cramped together, especially when you compare it with what LG and Samsung are offering, and Roku-based TVs that offer tons of features without straining through the menus. 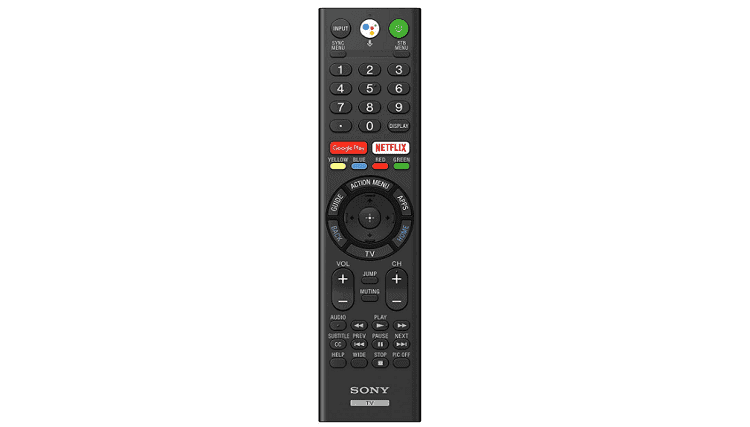 With some rival TVS using Roku TV or Fire TV Edition to deliver smart apps, the Sony XBR smart TVs use the Android TV platform for apps, services, streaming media, and interface. Android TV remains to be a powerful platform to beat, backed by a strong feature-set and flexibility. Of course, it doesn’t offer the full selection of Android apps as you would have on a smartphone or tablet, but the Google Play Store offers a wide selection of useful apps than all the other platforms. On Android TV platform, you have all the big names including: Amazon Video, Google Play Music & TV, Netflix, Sling TV, YouTube among others.

On the XBR75X850F, you can also use Google Assistant for voice cues, accessible through the dedicated button on the remote, although it doesn’t support handsfree, of which you might need a separate hands-free device like a Google Home Mini. With Google Assistant, you can search for media, skip to different apps, check weather reports and even control compatible smart home devices.

It has a full spectrum of features that can easily be compared to Amazon’s Alexa that is built-in Amazon Fire TV devices and TVs. The TV also supports Google Cast out of the box. That said, the X850F’s flexibility is fairly limited by the TV’s processing hardware that is sometimes bowed down by the tons of features available.

Navigating the Android TV interface can sometimes get jerky, compounded by the fact that the remote that connects wirelessly to the TV and the microphone that still requires an infrared line of sight for the buttons to work. Interacting with the X850F would be better, but it’s still good, coming in the backdrop of worse interactions we’ve seen in TVs that cost even more. 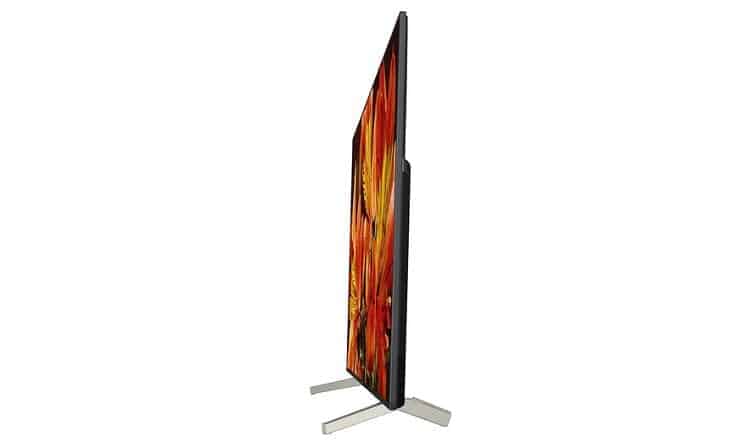 The Sony XBR does a good job with HDR playback, but it is far from perfect especially for anyone looking something beyond a dynamic standard range television. Similarly, its SDR is a far cry from being excellent with limited light and color range. The problem, basically, lies with the type of LCD panel used –an IPS panel that can’t deliver convincing black level/contrast performance. If you consider the way IPS panels work, you’ll realize that black scenes will look much grey and washed out – a problem that causes subtle shadow details getting lost in the grey edges.

Thus, the problem holds true for the 850F, that uses an IPS panel and lit from the edges rather than directly from behind. And more so when the edge lighting lacks any local dimming to help concentrate the light only where it’s needed in a picture. In fact, SDR content requires much less brightness than HDR content, but the X850F still struggles to delivers convincing black colors during dark scenes on Blu-ray or DVD, leaving then dull.

Keep in mind that not having very satisfying black levels reduces the vibrancy and dynamism of the TV’s color palette. On the positive, though, IPS screen have an advantage over VA rivals in that the offer wider effective viewing angles. As such, the X850F’s dark scene problems are made to look less of a deal-breaker in that in all other ways its pictures are quite superior for its money.

Thankfully, HD pictures are nicely upscaled to the screen’s native 4K resolution by Sony’s new processor. The new series is fitted with Sony’s X1 Extreme video processor, a jump from the standard X1 processor used in last year’s X750E models. With this component, the new sets are up to 40% more powerful, thanks to a unique twin-database system that works by eliminating noise from sub-4K sources.

This approach breathes life to HD Blu-rays and even DVDs, that look more detailed, like genuine 4K sources without amplifying any noises they may contain. It is impressive to see that in less than a year, there is new technology in mainstream TV that can upscale HD to 4K, and that can only be Sony’s X1 Extreme processor. Surprisingly, it uses the same approach to convert standard dynamic range (SDR) images to high dynamic range (HDR), resulting in visually unique, consistent and vibrant images.

Sony is so confident with this HDR upgrade system, that it’s applied in default to a majority of the X850F’s picture presets. As such, the TV’s mid-range price notwithstanding, it does deliver high-end performance, especially when it comes to HD and SDR content, resulting from the newer state of the art technology in HD-to-4K and SDR-to-HDR upscaling.

The XBR75X850F does support HDR signals in both HDR10 and hybrid log gamma (HLG). In fact, there is a latest firmware update, that also supports Dolby Vision content streamed through online services. For the most part, the TV does a fine job with 4K sources, thanks to Sony’s X1 Extreme processing and Triluminos color management that combine to deliver excellent light precision and noise management in order to impact as much as possible on precise 4K pictures.

About the only issue again is the use of an IPS panel. But this time the IPS issue is taken a notch higher by the way Sony’s TV needs to ramp up brightness in order to keep up with the intense demands of high dynamic range sources. In as much as the X850F only manages to deliver a little more than 500 nits of peak brightness, it is still strenuous for the IPS to handle.

As for sports content and content consumption, bright colorful content like BBC’s Life Story look excellent and detailed. You can easily pick fine details like fur and leaves at very sharp detail, with colors looking natural and balanced. Only that they aren’t as nearly vivid as they are on the LG OLED C8P Series. Still, it is a very attractive, eye-catching picture with solid color performance.

For gamers, 1080p video games and other upscaled, fast-action content comes through very well on the screen’s 4K resolution, with occasional 60 frames-per-second gameplay appearing smooth and fluid. However, this doesn’t mean that the X850F is a great choice for video games, it does produce good picture quality, but input lag is a factor that prevents it from getting a high rating.

Input lag (time between display receiving signal and updating screen) is where the X850F fails to impress, with a very high 105.3ms input lag in Cinema Pro mode. In Game picture mode, the input is cut to more than half, but even if it were to go to 41.8ms, it is still twice as high for a TV we’d recommend for gaming. Still, you can play games on this set and others of its ilk, but the input lag can be disruptive. For gaming, a TV with input lag of around 20ms or lower is more preferable.

As you marvel at the X850F’s vivid colors, your power is being sipped sequentially. Under normal viewing conditions with the Cinema Pro mode preset, the TV consumes 207 watts. In Power Saving (Low) the TV consumes 158 watts, but you’ll do with a dimmed screen, though, watchable, while Power Saving (High) drops consumption top less 65 watts, but uncomfortably dims the picture.

Sony’s 75-inch X850F TV is a beautiful, colorful and brilliant mid-priced 4K HDR TV. It does an excellent job in highlighting the improvements Sony has introduced over and above the already excellent X750F series from last year – enhanced processing, better brightness, subtly enhanced backlight dimming zones, even superb motion performance – resulting in picture quality that is sure to humble many more spendy 4K TVs.

Its black levels aren’t the best around, but it isn’t something you’d consider much when you are paying slightly less for a TV whose performance attracts a premium price tag. On the other hand, it highlights how, Sony in a quest to reduce costs ended up putting a low-contrast IPS panel at the heart of an otherwise perfect X850E. A decision that will certainly drive away anyone interested in utilizing high dynamic range technology’s huge quality potential.

In this Sony XBR75X850F review, its clear that the TV is an affordable way for movie fans to get their hands on Sony’s excellent video processing. For that, I’m hard pressed to recommend the Samsung QN75Q7FN (2018 model) that uses an excellent screen filter and super bright, ultra-colorful ‘QLED’ Quantum Dot picture technology to deliver some of the punchiest HDR pictures seen to date.

If you must stick with Sony TV, the Sony XBR75X900F uses a VA panel and LED lighting to deliver far superior picture with excellent black levels.