The TCL 50S425 is an affordable 50-inch 4K Roku TV that offers good value and capability for its small price, but our recommendation does come with a few caveats. 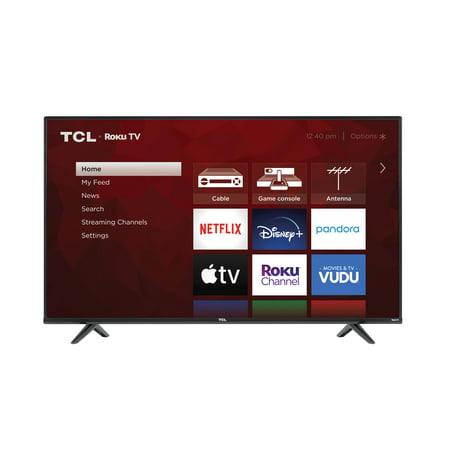 We check hundreds of products every day for the best prices TCL’s Roku TVs are, with only a few exceptions, best known for delivering best quality TVs at extremely affordable prices. Our review unit, the TCL 50S425 is a 55-inch Roku TV that TCL makes, and in smaller sizes, it sells for prices more affordable than many bargain 4K smart TVs.

But there’s a lot more to the TCL 4-Series, from the excellent Roku Smart TV experience to speedy response times, that will be a sure hit with gamers. Sure, it has a few rough edges, like flawed motion handling and mediocre HDR performance, but on the whole, it’s a great 4K TV that can be had at a low price.

As modern TV designs go, the TCL 50S425 is very basic, with minimalist black bezels surrounding the display, a pair of simple plastic feet for the stand and a matte-black panel across the rear of the chassis. The black back panel is accented with a row of tessellated triangles along the top and a stripe of ridges right above the component box that makes up the lower half of the TV chassis. Ideally, this are purely aesthetic embellishments, with no functional purpose.

Measuring 49 x 28.4 x 3.1 inches without the stand, the TCL 4-Series is small enough that one person can assemble and move the set, but the 26.7-pound weight is still large enough that a second person is recommended. Its 3.1-inch-thick design can be hung on the wall with a 200 x 200 millimeter VESA mount, but it will stick out a few inches from the wall.

Port and input selection come in way of three HDMI ports, including HDMI ARC for connecting a soundbar without having to run additional audio cables. You also have an ethernet jack for wired internet connectivity, while 802.11ac Wi-Fi is available for wireless connections.

There’s a single USB 2.0 port for viewing digital media files or powering a streaming stick, while an RF connector lets you hook up an HDTV antenna for over-the-air broadcasts. Additional ports include a composite video input, optical digital output for surround and a 3.5-millimeter jack for headphones or a stereo patch cable.

With the Roku TV platform, the TCL 50S425 can access a wide range of streaming services. The major players here include Amazon Prime Video, DirecTV Now, Google Play Movies & TV, Hulu, Netflix, Vue, Sling, Vudu and YouTube. As expected, Apple is missing in the list and Google Music isn’t also available, but you still have Amazon Music, Pandora, Spotify, and many other streaming services.

The TCL 50S425 boasts a 4K display, firing full 3840 x 2160 resolution, with direct backlighting and HDR (high dynamic range) support. The result is relatively goo (if basic) viewing experience, and better viewing experience than you might expect at this price range.

The TCL 50S425 doesn’t stand out when it comes to brightness, even in Bright (HDR) mode with the backlight turned up; it maxes out at 244.05cd/m2, which is half the 488. 01cd/m2 peak brightness on the 6-series. Again, it lacks local dimming that’s available on the 6-series, and its Dynamic Contrast settings can only brighten or dim the entire screen simultaneously.

Unlike other sets, the TCL 4 Series TV doesn’t offer any sort of automatic switching to game mode or detection of a game console, such as an Xbox One X. When you switch to game mode, it is a bit intuitive, since the mode is not offered in the regular selection of picture modes, and does require navigating into a separate menu of advanced picture settings to activate.

The 50S425 supports 4K gaming, and you can stream content with 10-bit color support at 24Hz. However, this panel does not support additional frame rates for streamed content, nor does it support HDR modes for either gaming or streaming. That’s fine is HDR content isn’t at the top of your list, but it doesn’t mean that games will appear less impressive than on other 4K sets.

Input lag is the amount of time it takes for a display to update after receiving a signal, and this is one of the few areas in which the 50S425 puts forward a modest score. The HDTV showed an input lag of 32.4 milliseconds, which is better than most budget sets we’ve reviewed.

The TCL 50S425 is an affordable 50-inch 4K Roku TV that offers good value and capability for its small price, but our recommendation does come with a few caveats. For instance, the lack of local dimming means that HDR content won’t look as dynamic on this TV, and its motion handling has a few noticeable flaws. This won’t be a problem during slow paced drams, but you’ll certainly notice it on action films and other kinetic content that will look less impressive on this set than on competing 4K sets.

But those competitors all cost more, some almost double, and for most shoppers, the defining feature of a TV isn’t the HDR format it supports or the precision of the backlight; it all gets down to price. With the 50-inch’s current price, it’s hard to find a 4K set in this price range at all, and the TCL 50S425 delivers great resolution, decent color quality and, sure, it supports HDR – albeit, only the basic HDR format.

The TCL 50S425 is also a great choice for gamers, who are not pretty much after format support and will surely appreciate the set’s speedy responsiveness.

As a value-focused Roku TV, the TCL 50S425 offers some of the best value we’ve seen on a cheap 4K TV. It is our newest budget-favorite 4K Roku TV, and is a great bargain for anyone shopping on a budget.