The new TCL 6-Series R635 is the real deal for budget TV buyers out there. It represents enormous value for its affordable price and offers premium picture quality than the competition. The inclusion of Mini LED technology greatly boosts contrast of the 6-Series and the AiPQ Engine does a great job upscaling HD video.

Available in three sizes (55, 65, and 75 inches), the TCL 6 Series R535 is a 4K Roku TV that uses Mini LED – a technology that usually goes into TVs that costs thrice as much –, and it adds a Quantum Dot filter for more vivid picture.

The result? The 6-Series is brighter than ever before, pictures are more colorful, and it doesn’t have a single issue of haloing or light bleed. TCL designed this TV to hide your cables, and this is the first TV to feature THX Certified Game Mode for smooth 1440p/120Hz gaming.

Sure, the 8K TV is the ultimate TV for 2022, with higher brightness and four times the amount of pixels, but if you’re buying a Smart TV to binge Netflix or Hulu streaming without breaking the bank, this is the 4K TV that we’d recommend for you.

The TCL 6 Series became available starting in August 2020. The TV is available in three sizes in the US, ranging from 55 up to 75 in. Our review focuses on the TCL 65-inch model (65R635), but all our recommendations should be consistent across every size in the line. Below is a table showing the pricing of the three models covered.

Due to the minor differences between the different screen size options, we’re sure that our recommendations for the 65-inch model apply equally to the smaller 55-inch version and the more extensive 75-in iteration of the set.

The TCL 6-Series 2020 has a lot going for it in terms of design, especially that Mini-LED, but it isn’t exactly a masterpiece as Samsung’s The Frame is, either. Still, it’s relatively slim, measuring 2.8 inches at the thickest point, but it slims down to just 1 inch thick around the outer bezel. The design looks a bit boxy, which is the same design as TCL’s past models. It emphasizes the display very well, with a frame-like bezel and a chassis covered in a brushed metal look.

The back of the panel protrudes a little bit to house the various TV components and speakers, but it will still mount to the wall easily using a 300mm x 300mm VESA mount.

The top half of the rear chassis has a cool-looking glossy finish, so if you’ll want to set the TV in the middle of the room instead of up against a wall, the backside of the set is not the everyday drab you’ll find on most TVs.

The set stands on two feet, which attach at either end of the TV – they attach pretty quickly, and the design looks great. New in the 2020 model we’re reviewing is the addition of cable management in those feet, with clips for power cables and other cords built-in.

Port selection is excellent – four HDMI ports, a coaxial connection for cable or antenna, a single USB port, an 3.5 mm headphone jack, a digital optical TOSLINK connection, and a small AV input connection – on the back right-hand side of the set. There’s also an ethernet jack for wired internet connection, as well as built-in 802.11ac Wi-Fi.

The area you’ll greatly appreciate the TCL 6-Series this year is its performance – mostly the black levels, contrast, and the lack of haloing you might have seen on previous TCL models.

That improvement is thanks to the new Mini LED backlight system that uses thousands of LEDs instead of hundreds to deliver near-perfect black levels to bright highlights. The only drawback you might notice here is that the peak brightness is a bit lower than other QLED sets that don’t use Mini LEDs, like the Samsung Q80T, LG OLED Series or Samsung Q90T, Vizio P-Series Quantum X.

Nonetheless, the result is a 6-series that’s closer to OLED in terms of brightness and contrast but greatly benefits from using quantum dots, just like last year, meaning you get to see a Wide Color Gamut that looks fantastic.

Color quality is vibrant, with life-like color on birds’ wings and exotic foliage when watching scenes from our Planet, Netflix’s 4K nature documentary. Backlit performance on the TCL 6-Series is equally good, thanks to the set’s many discrete lighting zones that provide high contrast light and dark with minimal haloing. Well, it’s not perfect, neither is any LCD we’ve reviewed. However, the haloing is significantly reduced and is only noticeable in scenes with very high contrast and minor points of light.

Viewing angles on the TV are also friendly and wide, with the only hint of color shifting noticeable when viewed at a 45-degree angle. That makes this a great 4K TV for Netflix binge or streaming the big game since anyone seated off the sides of prime viewing spot will still be able to see everything in total clarity and accurate color.

The TCL R635 can access a wide range of streaming services with the Roku TV platform. The major players here include Amazon Prime Video, DirecTV Now, Google Play Movies & TV, Hulu, Netflix, Vue, Sling, Vudu, and YouTube. As expected, Apple is missing from the list, and Google Music isn’t also available, but you still have Amazon Music, Pandora, Spotify, and many other streaming services.

Surprisingly, TCL gave all three models in the 6-Series a good share of gaming chops. While most modern TVs have a low-latency game mode, the TCL 6-Series R635 is the first TV to THX Certified Game Mode, which does more than strip out the extra video processing that would otherwise slow the player’s response time. It also meets a host of other criteria for high-quality images.

Also, the 6-Series QLED TV supports all of the gaming features of HDMI 2.1 connectivity, like Auto-Low Latency Mode (ALLM), which switches to game mode as soon as the console is turned on, and Variable Refresh Rate (VRR), which matches the screen to the frame-by-frame output coming from the TV, synchronizing the two for judder-free gaming.

With decent overall lag time – just 21.5 milliseconds, the TV is a boon for gamers looking for an affordable alternative. Yes, there are sets with better input lag out there, including the Hisense H8G Quantum (13.8) and the 2019 TCL 6-Series R625 (13.1); our review model is still more than fast enough for most gamers and notably faster than either the Vizio M-Series Quantum (29.9) or the Samsung Q60T QLED TV (27.8).

Therefore, if you want one of the best gaming TVs on the market, this would be it. It’s also shaping to be one of the best TVs for PS5 and Xbox Series X into 2022, with a perfect combination of excellent performance, short lag times, and HDMI 2.1 gaming support that make it ideal for handling the 4K, high-frame-rate gaming offered by the upcoming consoles.

Verdict – One of the best TV values 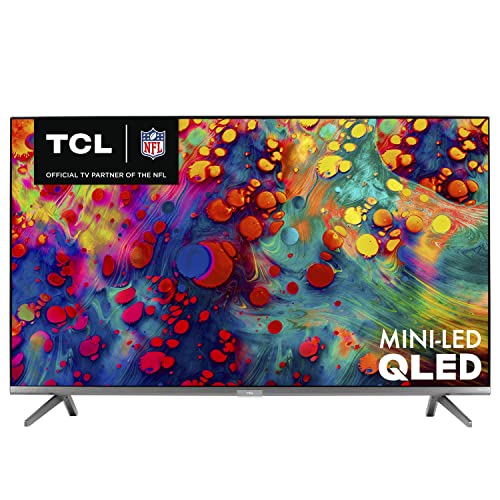 The Hisense U8G rocks an even brighter panel. Still, ultimately, all of these TVs are excellent values that offer incredible performance for the price, with the newer TCL 55R646 sharing our Editors’ Choice award with the Hisense U8G. Should you want to save a bit more, the Hisense U7G offers more modest (but still substantial) performance with the same Android features as the Hisense U8G.

Overall, If you can’t fathom spending any more than a grand on a TV but still want incredible performance, the TCL 6-Series is the TV you want to pick up.