The TCL 6-Series Roku TV (55R617) is the best TV under one grand, period. It packs Wide Color Gamut, Dolby vision and full-array panel, making it the ultimate budget-friendly 4K TV we’ll recommend to friends, families and everybody else.

The TCL 6-Series Roku TV (55R617) is a 55-inch 4K TV that delivers on its promise of superb picture quality, a sleek style, and connected Roku TV features while costing significantly less than comparable sets. TCL may not be popular as you’d say of Sony, Samsung or LG, but over the years the company has gained popularity budget buyers of 4K televisions.

The P-Series was a huge hit last year, and with the new 6-Series, they’re stretching the scope even further by giving incredible picture quality and a slew of streaming apps and services. TCL is now introducing the TCL 55R617 Roku TV, which combines high performance, excellent picture quality, and an affordable price. The 55-inch model is the standard; however, it is also available in 65-inch (TCL 65R617) and 72-inch sizes (TCL 75R617).

It easily earns our Editors’ Choice for affordable 55-inch TV sets due to its superb picture quality, sleek style, and affordable price.

If there is one aspect of the P-Series that TCL did not over-emphasize, it is appearance, but sets in the 6-Series appear to be pricey. You’re getting a quality look for the TCL 55R617 price, with a flat glossy black plastic bezel surrounding the screen (0.25 inches-sides; 0.75-inch on the lower panel).

The sides have a slim-profile plastic piping in a gunmetal tone, which lends a touch of flair to the entire design. It is supported by two U-shaped legs finished in the same gunmetal as the side pipes.

All ports are set on the right side of the television, towards the rear. Three HDMI ports, one USB port, one Ethernet port, a standard antenna/cable connector, a 3.5mm composite video input that can be utilized with the provided adapter, and an optical audio output are available here. You also have a 3.5mm headphone jack and a reset button.

The port’s location and orientation to the right aids connecting the set, albeit the three HDMI ports may limit the number of devices that may be connected before requiring the installation of a splitter. Three HDMI ports may seem sparse for a modern set, but this appears to be one of the places where TCL cut corners to keep the 6-Series affordable.

Several of the sets we’ve previously evaluated include four HDMI ports as standard, with a couple going as high as five. Three HDMI ports are pretty sparse in this case. You’ll need a satellite box and two game systems to complete the setup, but thanks to Roku TV, you may not be utilizing a media streamer quite as much. Occasionally, the remote control may be misplaced, in which case a cluster of buttons in the lower right corner behind the television provides physical control.

The remote provides immediate access to services such as Hulu, Netflix, and Sling TV. Each service has its own button. The volume controls and mute button are located along the right edge.

As a Roku TV, the TCL 55R617 6-Series provides access to a variety of apps and services, much as a regular Roku media player does. It serves as a central location for nearly all media streaming services, including Amazon, Crunchyroll, Google Play Movies & TV, Hulu, Netflix, Sling TV, and YouTube.

Roku is home to the majority of channels (chosen apps) found in the smart TV ecosystem, so you’ll be familiar with the services (except Apple). Additionally, you may access the Roku TV app from your smartphone, and Roku TV supports video streaming from your smartphone.

Today, we’ve all come to appreciate the benefit of good resolutions, and we expect a 4K panel to deliver on that. The TCL 55R617 6-Series ultra HD (UHD, or 4K) television supports both HDR10 and Dolby Vision high dynamic range (HDR) content. This implies that the majority of HDR video available on the majority of streaming providers and Ultra HD Blu-ray discs will appear flawlessly on the TV.

If you’re familiar with the stats, the TCL55R617 has an adequate brightness (497.15cd/m2) and similarly remarkable black levels (0.01cd/m2), all of which are supported by a respectable 49,715:1 contrast ratio. This is an amazing performance, but with a few flaws. For example, you may notice some minor bloom, and the contrast between grays and blacks is not particularly graceful.

The TCL 55R617 features a brilliant panel with HDR capability. I delighted at the beautiful and balanced colors on Ultra HD Blu-ray while watching Planet Earth II, narrated by David Attenborough. The visuals were horrific; the island’s ocean blues and forest greens appear real and vibrant, with discernible hair and feathers of sea creatures. When viewed from the sides, it still appears fantastic, though not quite as good, as the greens appear slightly washed out.

The duration it takes for a display to update after receiving a signal is referred to as input lag, and this is one of the few areas where the TCL 55R617 excels. The HDTV’s input lag of 18.4ms is about half that of the majority of screens we tested, albeit it has an extremely high input lag in Movie picture mode. If you’re a fan of high-definition films and videos, this is about the greatest 4K performance you can get on a budget television.

Under normal viewing conditions, the Roku 55R617 consumes about the same amount of energy as comparably sized 4K televisions. It consumes 153 watts in bright mode, but just 128 watts in Low Power image mode, with the screen darkened yet still quite watchable. You can reduce the power consumption of the HDTV by increasing the Energy Saving settings, however this dims the screen even more.

The TCL 55R617 is part of the new sets in the 6-Series (succeeding the P-series), a line of cheap 4K televisions with a large screen. It improves on the aesthetics of last year’s model, resulting in a more appealing television while maintaining the previous model’s superb contrast and vibrant colors.

Even with a few idiosyncrasies, such as few HDMI connections and a remote without a headphone connector, it compensates with amazing contrasts that justify the HDR label.

To that end, the TCL 6-Series Roku TV (55R617) specifications are bolstered by the Roku TV platform, which offers a diverse selection of linked apps and services, one of my favorite features of the high-end Roku media streamers. It has lots of exciting features, especially the 55-inch HDR screen, and is possibly the greatest budget TV deal available this year. As a result of these factors, it receives our Editors’ Choice for budget televisions.

That said, TCL upgraded the 6-Series with a trio of panels in their 2021 lineup. The new TCL 6-Series R635 (55R635, 65R635, 75R635) is the real deal for budget TV buyers out there. It represents enormous value for its affordable price and offers premium picture quality than the competition.

The inclusion of Mini LED technology greatly boosts contrast of the 6-Series and the AiPQ Engine does a great job upscaling HD video. You can check out the 2021 TCL 6-Series review here, and certainly you’ll find better value as the new Series is built on the success of the models in this review. 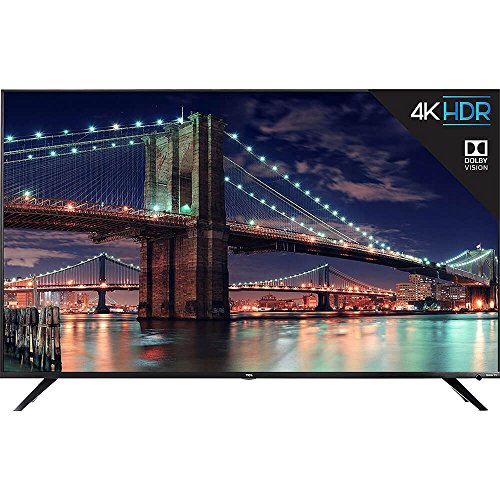