China is increasingly becoming a Smartphone Hub, they seem to have perfected in the art of manufacturing phones better than anyone else. And not just phones, but phones worthy to write about with high end features at an affordable price. A case in point is the UMI TOUCH 5.5-inch 4G phablet that runs on the latest Android 6.0 marshmallow OS out-of-the box. The smartphone is powered by an Octa-Core Mediatek MT6753 64-bit processor clocked at 1.3GHz with 2GB of RAM system memory installed on it. The phone also packs 16GB of ROM that is expandable to 128GB with a TF Card.

The highlight point for this smartphone is on its camera segment as it comes with a 13MP rear camera and a 5MP front Camera, a big win compared to what most budget smartphones come with. This is an unlocked device, therefore you don’t have to worry whether it will accept your service provider network. The UMi Touch yields enough power to handle daily tasks for a smartphone user such as web browsing, playing games, listening to music and taking of photos.

The UMI Touch has a metallic finish, a premium design that makes the phone look pretty in the hands. It measures 6.08 x 2.99 x 0.33 inches and weighs 196 grams, making it a slim and portable device to carry around. The 5.5 inch Corning Gorilla Glass 3 Screen display comes with a 1920×1080 Full HD screen resolution with 2.5D curved glass on top and a finger print sensor embedded on the center home button on the front. The glass sensor unlocks the phone fast enough and it is more accurate. The screen is decent and produces a bright and clear picture with a PPI of 401 and excellent viewing angles.

The UMi Touch is powered by a power-efficient Octa-Core Mediatek 6753 CPU that runs at 1.3GHZ on all the eght cores. Add to the processor 2GB of RAM and an ARM mali-T720 GPU and you get a mid-range smartphone capable of handling most of the games with decent frame rates thanks to the GPU. In terms of storage, the device comes with a standard 16 GB with 11.18GB usable storage after taking the System OS space. You can still expand your storage with the use of an external storage which allows up to 128GB so that you can keep all your files, documents, photos and music.

In terms of connectivity, the UMi Touch comes with Micro USB 2.0 port with OTG support, 3.5mm Audio port, Micro USB slot and a TF or Micro SD card slot. The smartphone has dual Micro SIM card slots and supports a range of network types including 2G, 3G and 4G (GSM+WCDMA+FDD-LTE respectively). There is also Wi-Fi 802.11a/b/g/n for wireless internet connectivity and Bluetooth 4.1 for easy sharing of files and documents with other devices.

The phone is well packed when it comes to the camera segment. The back of the phone boasts of a 13MP camera with Sony IMX328 sensor and Dual LED flash, and the front is well staffed with a 5MP camera with Hynix HI553 sensor with Front LED flashlight more ideal when taking Selfies. The device supports a range of picture formats including BMP, GIF, JPEG, and PNG and for video formats it supports both 3GP and MP4.

The battery capacity of this smartphone is also a big win as it comes with a capacity of 4000mAh. It lasts for an average of two days and drains at a very slow rate even when you are using Wi-Fi. It is important to note that the battery is in-built, but given that it gives a great service and long standby times, there is nothing to worry about. It can work all day, so you don’t need a spare battery or a power bank. There is also a large speaker on the back for a good listening experience.

The UMI TOUCH 5.5-inch 4G is a decent phone with a premium feel that is faster with some mid-range features including a metal body, a fingerprint reader and a bright crisp screen at a budget price. This is a tough device that will survive a hard fall thanks to its metallic finish. The screen too is strong enough not to break during such a hard fall. The features included in this device fit into the life of a smartphone user thanks to its 4000mAh battery capacity that promises to keep the device running all day and a powerful front and rear camera for photo enthusiasts. The UMI TOUCH 5.5-inch 4G phablet is a High-Performance power packed smartphone under your budget that gives value for every penny you spend on it. 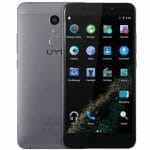