The Toshiba M550 (75M550KU, 55M550KU, 65M550KU) is a budget-friendly option in a crowded Fire TV market. At first glance, it would appear to offer some nice perks for the reasonable price, with built-in Amazon Fire TV standing out, it's one of those affordable panels to get for your living room.

If you’re looking for an affordable midrange 4K TV for your living room – and you’re a fan of Amazon Fire TVs – the Toshiba M550 should be near the top of your list. Launched in May last year, the M550 line of 4K HDR TVs punches above its price, offering practical panels that can deliver 80% of what you’re going to get from the expensive models at a third of the price.

Available in three variants, 55-, 65- and 75-inches, Toshiba seeks to deliver the kind of performance you get from the Amazon Fire TV Omni launched around the same time, by offering the fine-tuned Fire TV ecosystem at a lower price.

From a feature/price perspective, that approach seems to have succeeded. In this Toshiba M550 Review, we are assessing the 75-inch 75M550KU model that packs a 120Hz refresh rate, Dolby Vision HDR and HDR10+ support, and a built-in Amazon Fire TV platform with Alexa.

Since the other two available models the 55-inch 55M550KU and the 65-inch 65M550KU, share the same core features and technologies, we expect the viewing experience and performance of all three models to be similar, and our recommendations for the 75-inch 75M550KU may as well apply to the other sets.

The Toshiba 75M550KU has a design that stands out a bit from the common black-on-black plastic TV set: It now gets a silver plastic strip at the bottom of the panel and silver plastic feet. The new design gives it a more stylish feel, although, it attracts more attention to the set itself – whether that’s a hit or a miss is a personal preference.

It’s a little thicker at the bottom than other TVs in this size range, thanks to a large port box that sits on the side of the back of the TV. It has four HDMI 2.1 ports and one USB port, but we’re not sure how gamers will take advantage of the M-Series’ 120Hz capabilities now that the HDMI ports only support 4K @ 60Hz.

The feet, besides being silver, they use the typical boomerang style. If you want to mount the TV instead, it supports VESA 200 X 300 and will work with any of the best TV mounts.

The full array of features on the Toshiba M550 TV is pretty solid, and most of the benefits come from the built-in Amazon Fire TV platform. If you’ve used a Fire Stick before, the experience and controls on the 75M550KU are pretty much the same things; upon powering up the TV, you’ll scroll through Fire TV’s main interface to find the content you’re looking for, and can even download relevant apps to stream the content you need.

However, some apps come pre-installed including Amazon’s app suite such as Prime Video, and others like YouTube, Disney+, and Hulu among others. The M550 includes 16GB of onboard memory for anything you’d want to download and save, from family photos to home videos, and the storage can be extended via the available USB port.

Also, like the Amazon Fire TV Omni, the M-Series is equipped with far-field microphones so you can issue hands-free voice commands from across the room, without having to reach a remote.

It supports both Dolby Vision and HDR10 for a more vivid and colorful picture when viewing HDR content from Amazon Prime Video and other streaming services. But the most outstanding feature of the Toshiba 75M550KU is its native 120Hz LCD panel.

While most other Fire TV models use 60Hz panels, the Toshiba 550 tops out with a vivid 120Hz panel, that’s a boon for gamers and movie watching. The 550 is one of the first smart TVs with the Fire TV software to offer this gamer-friendly feature.

Despite only being an LED-LCD TV instead of an OLED, the Toshiba M550 has 48 dimming zones and uses an array of local dimming backlights over direct-lit or edge-lit lighting. That allows for contrast to appear more uniform without much haloing or splotchy patches of grey in the background.

For gamers, the TV may not compete with the likes of our Editors’ Choice for midrange TVs, the Sony A80J in terms of picture quality and processing performance, but it holds its own at a much lower price. In saying that, the Toshiba M550 not only has a 120Hz panel, but it also supports variable refresh rate (VRR) up to 60Hz – an incredibly nice feature to have if you plan on plugging in a PS5 or Xbox Series X.

We only wish the HDMI ports here would fire over 60Hz so that these next-gen consoles would take full advantage of the 120Hz.

Plus, it has Amazon Fire TV with Alexa

One other fantastic feature of the Toshiba M550 is the built-in Fire TV platform, the same one available in the Amazon Fire TV Stick 4K.

Having Fire TV built right into the TV has several advantages – like not having to purchase a separate streaming device, saving you some bucks – and being able to use the remote to control the TV and any apps you want to use.

As for the apps, the Amazon Fire TV platform has all the best streaming services pre-installed; you’ll find Netflix, Hulu, Disney Plus, and, of course, Prime Video.

The last perk of having Amazon Fire TV built-in is that your TV comes with Alexa and can act as an Amazon Echo device, too. You can use Alexa to control other smart devices around your house or get information about a local restaurant all while watching a show or movie – very handy if you’ve invested in smart home products.

In addition to the reachable price, the Toshiba 75M550KU supports Dolby Atmos, which is a big deal for audiophiles looking to get the best possible surround sound from content that uses Dolby’s 3D format.

There’s also support for DTS Virtual:X, which inherently makes all kinds of two-channel stereo content a lot more like surround sound – though this will depend on how good the M550’s internal speakers are. It’s also possible to pair the TV with your Amazon Echo Dot or other smart speakers and enjoy the sonic performance as you binge on content on the 4K screen.

The Toshiba M550 is a budget-friendly option in a crowded Fire TV market. At first glance, it would appear to offer some nice perks for a reasonable price, with the built-in Amazon Fire TV standing out – and, in general use, the 75M550KU can offer a very appealing image that makes its price that much more compelling.

On the plus side, the 4K picture gets reasonably bright and is paired with a high 120Hz refresh rate display that makes it easy to watch almost any type of content even in a brightly lit room. But the audio isn’t as impressive as the picture, however. Even though it certainly manages to pump out a lot of volume, and features DTS Virtual:X, it’s still a lot worse than other TVs that cost around the same price.

Additionally, it doesn’t have as much to offer against some of its competition on the design side either: the very similarly priced Hisense ULED 75U9DG boasts full-array local dimming zones with Quantum backlighting for a vibrant, contrasty, bright image, whereas the Toshiba 75M550KU has basic backlighting that isn’t quite adept at colour uniformity or finer control of contrast.

Is Toshiba a good 4K TV?

The Toshiba M550 is a good TV, especially for users who don’t fuss too much over finer points of picture quality. Also, anyone looking for an affordable large-screen TV will likely be more than satisfied with the clarity of the display, and the Amazon Fire TV offers compelling integrations with other Amazon services. For those wanting a 4K TV that’s affordable and bright TV for a great price, the Toshiba M550 (75M550KU) is a clear winner in all its variants. 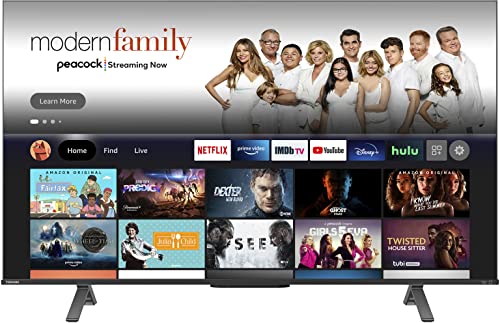