There was a time when 32/43-inch TVs like the Toshiba TF-43A810U21 were the big boys in the block. In fact, they were every TV manufacturer’s dream product, and they were consistently the panels sites like DigitalMag would regularly review. Those days are long gone, and the TV market has moved to greater sizes – now, common sizes sit between 55 and 65-inches.

That doesn’t mean the humble 43-inch TV is completely relegated to the bedroom as a second screen. It somehow makes its way into living rooms with smart TV features, especially for those with small living room that cannot accommodate a 65-inch panel like our Editors’ Choice the Samsung QN65Q60RAFXZA that will take half a wall.

With that in mind, the Toshiba TF-43A810U21 is a budget through and through. But when it comes to 43-inch 4K (2160p) TVs, there isn’t much difference in quality, all that matters is how much you’re getting the set for – and of course the visual aesthetic.

The Toshiba TF-32A710U21’s design is a mixed bag – on one hand the frame plastic itself looks quite good, but is made of plastic. Sure, it is a plastic construction, but the black plastic is at least narrow, and the simple Toshiba logo on the bottom adds some flair.

We really don’t like the TV’s stand, however. We think that most people buying the 43-inch TV are probably doing so for space saving reasons, and it becomes annoying that the feet are spaced widely apart. Around the back, you have for VESA-mount holes should you find it necessary to hook the set to a stand or a wall.

The TV’s remote is basic and functional. It has dedicated buttons to open Netflix, Prime Video, HBO and Vue; and its free of superfluous buttons.

The Toshiba TF-43A810U21 runs on Fire TV OS platform just like the 32-inch TF-32A710U21, and to get the best of supported features, you’ll need to sign in with your Amazon account. This is not new though, Fire TV streamers that are built around using your account for transactions like purchasing app and renting media.

However, on the Toshiba Fire TV Edition, you don’t absolutely need an Amazon account to use the TV. There is an optional Basic mode that lets you use the TV as a TV, without access to most streaming features in the interface, but providing access to the TV’s varied inputs. 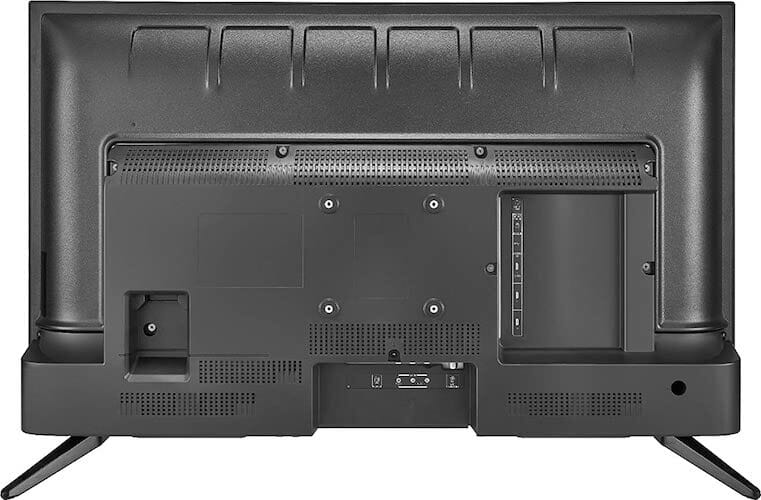 But the surprising thing is, the 4K (2160p) picture quality of the TV’s image means that this might be actually something you’ll want to consider., as it delivers good quality picture than most budget TVs.

Now, this being a budget television, so naturally you’re not going to get the same level of clarity and performance you would out of a premium OLED or HDR-equipped TV, but the TF-43A810U21 is nevertheless a very enjoyable screen to watch. The lack of Dolby Vision HDR means that it isn’t quite capable of preserving fine detail in the brightest and darkest areas of image, but is impressive for an image.

Viewed under normal conditions, the 43-inch set will consume 86 watts of power. The Toshiba Fire TV Edition doesn’t have any significant power saving modes other than the normal backlight dimming, of which it reduces consumption to 63 watts, and reduces screen brightness considerably.

The 43-inch Toshiba Fire TV is an easy choice to recommend, with sound and visual performance which are very good at this price point. You’re obviously not getting Dolby Vision HDR support, but for a budget set, you’re getting colors that are rich and vibrant, good image detail, and the sound is crisp and clear – although it is admittedly lacking in oomf.

On the other hand, this functionality is wrapped in an interface that’s so easy to use, despite the low contrast levels. Of course, the inclusion of Alexa makes things even more exciting and is an affordable way to get Alexa integration into your home, even if it’s more limited function.

If you’re looking for a budget 43-inch set with smart TV features and 4K (2160p) picture, then the Toshiba TF-43A810U21 is a great option, especially considering how good its 4K picture looks…just supply your own streaming box to avoid dealing with its built-in OS.